Russia is never going to stop. 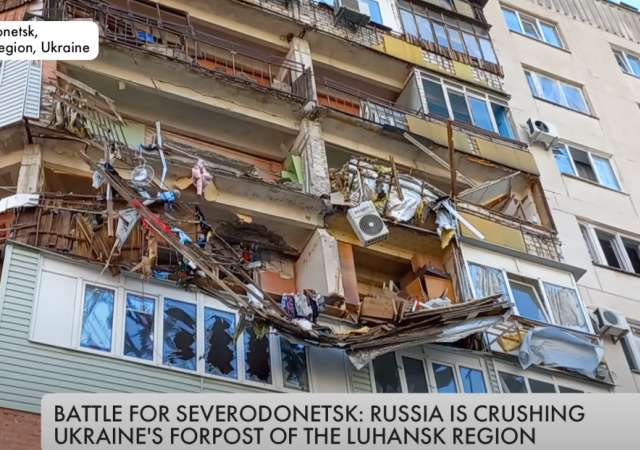 Day 104. The Russian invasion of Ukraine is still going on. Unfortunately, it looks like Russia has the Luhansk region.

So many people left Severodonetsk and Lysychansk. Russian forces outnumber Ukrainians but they will not give up. Ukrainians will keep fighting.

Russia controls Mariupol but it’s a mess. Health officials worry the city might have a cholera outbreak:

The city’s exiled local leaders have voiced concern about the water supply for weeks, and on Monday, mayoral aide Petro Andryushchenko said that decomposing bodies and piles of garbage are contaminating drinking sources, leaving residents vulnerable to cholera, dysentery and other ailments.

The Russian officials now running the city recently imposed a quarantine, Andryushchenko said in an appearance on Ukrainian television. He did not elaborate on the measures, and his statement could not be independently verified, but he said the humanitarian situation there was getting worse.

“Spontaneous burials are still in almost every yard in Mariupol,” the city council wrote in an update on Telegram. “Bodies are rotting under the rubble of hundreds of high-rise buildings. And it literally poisons the air.”

Public health experts have warned that warming weather and prolonged warfare could expose Ukraine — its soldiers and civilians — to infectious diseases, potentially ushering in a new phase of the conflict that forces authorities to contend with outbreaks of illness while fending off Russia’s invasion. The most at-risk areas, officials have said, are the country’s occupied regions, where long bouts of fighting have left sanitation systems in ruins.

Russia continues to bombard Ukraine on many fronts:

Ukraine’s Ministry of Defense says that Russian forces have launched missiles and air strikes against a number of targets across Ukraine, as they try to break down Ukrainian defenses and hit key infrastructure. Colonel Oleksandr Motuzyanyk, the Defense Ministry spokesperson, said Russia was carrying out “intense fire and assault operations along the entire line of combat confrontation in Donetsk and Luhansk regions.” Seven aircraft had launched guided missiles from above the Black Sea and Caspian Sea, while coastal missile systems in Crimea were also active. On the ground, Motuzyanyk said the Russians had made some advances, including north of Sloviansk, where they were advancing in the Sviatohirsk area toward the Siverskiy Donets River.

Russia captured Mariupol after the Azovstal steel plant fell after weeks of shelling. The Ukrainians have finally received the fallen:

Russia has begun turning over the bodies of Ukrainian fighters killed at the Azovstal steelworks, the fortress-like plant in Mariupol that became a symbol of resistance against Moscow’s invasion.

Dozens of the dead taken from the bombed-out mill’s now Russian-occupied ruins have been transferred to Kyiv where DNA testing is underway to identify the remains, according to both a military leader and a spokeswoman for the Azov Regiment.

The Azov Regiment was among the Ukrainian units that defended the steelworks for nearly three months before surrendering in May under relentless Russian attacks from the ground, sea and air.

It was unclear how many bodies might remain at the plant.

Meanwhile, Russian forces continued to fight for control of Sievierodonetsk, an eastern Ukrainian city that is key to Moscow’s goal of completing the capture of the industrial Donbas region.

Ukraine moved against Russia in Severodonetsk over the weekend, but the inevitable has happened. Most residents have left and Russia outnumbers Ukraine in the city and Lysychansk:

Both sides fought for the city in street-by-street battles on Monday as artillery shells rained from above.

The intensity of fighting there and in nearby Lysychansk has made them both “dead cities”, Mr Zelensky said.

Since pulling its forces back from the Kyiv region in March, Russia has refocused its military efforts on Ukraine’s eastern Donbas making slow advances there in recent weeks.

Despite the Russians’ superior numbers, Mr Zelensky said the Ukrainian defenders were holding out and had “every chance” of fighting back.

Artillery strikes have also intensified on neighbouring Lysychansk, which Mr Zelensky said he had visited on Sunday as part of a tour of the eastern front line.

An elderly resident in the city, Oleksandr Lyakhovets, said a Russian missile had struck his flat soon after, engulfing it in flames.

Wipe everything out and then enslave it for 50 years.

Russia is on its last legs, wobbling, cannot continue. Putin has no clue, killing too many Generals, the Ukrainians are fighting like super men…….

Zelenskyy is pushing the Russians back and maybe another 50 Billion will win the war this time.

Yep, they’re on the ropes this time for sure…..

If you believe that Putin will lose this war, you are mistaken. It has now devolved into an artillery duel. And, Russians love artillery.

And, remember those new long range missiles coming in from the US may be a game changer, but they are too complex for some Ukrainian ground pounder to learn to operate and maintain over the weekend. US Advisors will be going with those missiles no matter how much the White House and Pentagon lie.

Matt, you have a misfire here and obviously did not see the sarcasm in my post or have been reading my ongoing “challenge” with some REMF types here.

On a different topic, those missiles will amount to nothing ( too little too late). The advisors will undoubtedly be in theater but wont be on the line. (wont risk the PR if one was MIA/KIA)

It is not possible to erase hundreds of years of russian/soviet oppression. One of the biggest reasons for Poles being so supportive of Ukrainians’ plight is being tortured, slaughtered and raped for centuries. If there is anything that russians do well, it is just that. As for rapes, “any port in storm” is probably the most accurate description. It is funny – and excruciatingly sad – that West insisted on seeing them in a positive way, “they are just like us.”. No, they are not, unless we see ourselves as hordes of quasi-literate, unwashed and drunk thugs.

Not a bad description of some of our cities, these days.

Poland endured centuries of Prussian oppression to, and had 1/4 of all of them killed by the Nazis and Germany today happens to be one of Poland’s best friends (if you could find German investors who haven’t invested in Poland you are truly an amazing explorer).

The Hapsburgs treated the Poles better than the other partition powers, but Austria was the most pro-Nazi German state in WW2; guess what Poland and Austria are close friends today.

Poland is supporting Ukraine just like every other NATO country (including Turkey are you going to tell me Russia occupied them?)

Derb describes it as a war between the two most corrupt white countries in the world. Not that there’s no reason to favor the Ukrainians.

Russia does not have numerical superiority, even if you include the 40-50.000 Ukrainians fighting on its side. What Russia does have is an insurmountable advantage in heavy weapons, especially artillery. The Ukrainians are fighting heroically, but they are inevitably going to be ground to a bloody pulp. What is the point of backing Ukraine in this war except to cause more death and destruction?

“ What is the point of backing Ukraine in this war except to cause more death and destruction?”

Weapons sales, and killing off our present generation of fit and healthy Americans in their prime years for reproduction.

Good thing you weren’t around at Valley Forge…

You have to realize that that wasn’t fought to cover Biden’s tail.

We made a promise.

Mr. Biden, like Mr. Obama before him, is Renigging.

This is the start of WW3.

Who is we?
The ones that said if Ukraine gave their Nuclear Weapons back to Russia that they would be protected?
That we?

Realistically,
Russia is winning.
The Ruble is stronger than before the invasion, Russian exports are doing extremely well, Putin is methodically gaining ground and logistics by the day.
Any ” News” we receive is laundered and pressed.
We are pledged in at over 54 Billion. Roughly $150.00 per capita.
Thanks to my Representation in the House.
Biden allowed this invasion to proceed intentionally.
First, he had to cover up Bidengate.
After that of course, opportunities abound.

He sacrifices an entire Nation to cover his corruption.
The man is pure evil.

Hard to argue or dispute any of your points

Well no, Russia is not ‘methodically gaining ground’ by the day.

Russia is very slowly taking ground in the center-east regions of its invasion. The Ukraine has been just as slowly but successfully retaking territory at the invasion’s outer edges in the north-east and south-east. Neither country is (apparently) able to force a decisive encounter, and neither is (apparently) able to be strong everywhere.

Ukrainian high command apparently sees the south-east as very important and has worked to slow the Russian drive to Odesa. They have managed to hold (for now) Mykolaiv, a key on the road to controlling the Black Sea region.

Russian high command apparently sees the center-east as most important. They’re grinding down the Ukrainians for now. Interesting, despite their local advantages they have yet to take and hold Sievierodonetsk, though they may well do so in the near future.

What we have now is a long and brutal war. The Confederacy had all the disadvantages and yet it held out nearly four years. The Great War was supposed to be over and done in three months. Few besides Churchill thought that Britain could resist Hitler. The Russian-Ukraine will will be the same, and yes, Ukraine, whatever the final result, will be wrecked. Apparently the Ukrainians intend to fight it out anyway.

While some speculate that Russia will declare victory once it completes its capture of the eastern Ukraine, Ukraine’s leadership has (so far) made it clear it has no incentive to stop fighting. The Ukrainian people, most of them, appear to be willing to keep fighting.

Expect a long and inconclusive war.

What Ukraine is re-taking, Russia is done with.
Watch and wait.

Personally if I was Zelenskyy, I would take the fight to Russia. small arm small team tactics and hit very public supply lines inside of Russia. It may not amount to much in the grand scheme of things but it will put Russia on notice that they can be hit internally.

Ukraine attacking Russia Wood be exactly the wrong thing to do and completely suicidal for the Ukrainians
Right now most Russians are resisting conscription, and Putin is unable to send his entire army of conscripts there,
He can only send “volunteers “
Once there are Russian civilian casualties in any major Russian city, public opinion will completely change and they will demand the entire force of the Russian army be sent to crush the Ukrainians.

That would be the deal.
Putin is tired of the proxy war as it is and has been calling the cowards out.
If Ukraine strike with U.S. weapons, well, we are part and parcel.