Ukraine War: Across Russia, “Men of Fighting Age Are Being Summoned”

Ukraine War: Across Russia, “Men of Fighting Age Are Being Summoned” 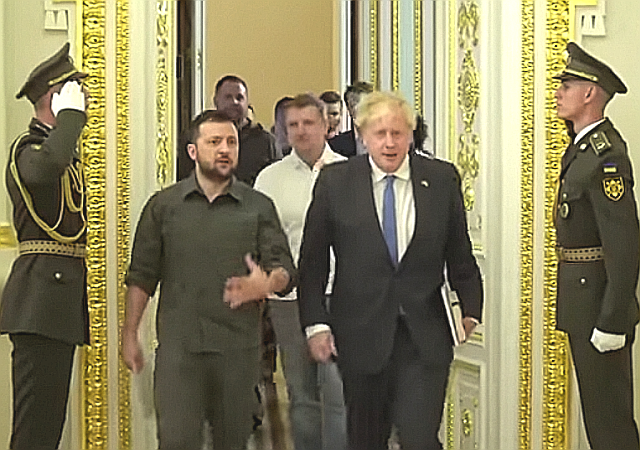 As the war enters its 115th day, the invading Russian forces appear to be consolidating their gains in eastern Ukraine. The Russian military has made further inroads in Ukraine’s eastern Donetsk region, the British Ministry of Defense said Sunday.

In past two days of fighting, the Russian forces have renewed “efforts to advance south of Izium, with the goal of advancing deeper into the Donetsk Oblast, and to envelop the Sieverodonetsk Pocket from the north,” the British military intelligence disclosed.

The Russian military has not completed the encirclement of Sieverodonetsk, but earlier this week they broke into the center of the city, news reports claim. President Volodymyr Zelenskyy declared that the Ukrainian defenders were fighting for “every meter” of Sieverodonetsk, a key city in country’s industrial heartland.

In the past 48 hours, Russia appears to have “renewed its efforts to advance” south of the town of Izium and deeper into Donetsk, UK military officials said. They believe Russian forces aim to envelop the pocket of territory still held by the Ukrainians from the north.

Russian officials also say they are trying to establish a humanitarian corridor for civilians trapped in Sieverodonetsk. The UK Defence Ministry said that the proposed evacuation route would take the evacuees deeper into occupied territory, and that the civilians are “likely to be suspicious” of using it.

However, if they refuse to use it, Russia will “likely claim justification in making less of a distinction between them and any Ukrainian military targets in the area,” the British officials said.

The latest Russians assault is aimed at encircling large number of Ukrainian troops, including country’s elite fighting units, in Sievierodonetsk. The Russians employed similar tactics in the battled for the Ukrainian port city of Mariupol, where 1700 defenders were forced to surrender after weeks of defiant resistance.

Thousands of civilians were reportedly killed and the city was turned into rubble after two months of heavy Russians shelling.

As the Russian invasion rages into its seventeenth week, the Europeans are stepping up their support for Ukraine.

On Saturday, the European Commission, the executive arm of the EU, backed Ukraine’s candidacy to 27-member bloc. The move brings Ukraine one step closer to joining the EU, fulfilling Kyiv’s long-standing demand.

The UK will continue to provide heavy weaponry and training to Ukrainian armed forces, Johnson pledged. “We’re here once again to underline that we are with you to give you the strategic endurance that you will need,” he said.

The Associated Press reported the European support for Ukraine:

The European Union’s executive arm recommended putting Ukraine on a path to membership Friday, a symbolic boost for a country fending off a Russian onslaught that is killing civilians, flattening cities and threatening its very survival.

The European allies’ latest embrace of Ukraine marked another setback for Russian President Vladimir Putin, who launched his war nearly four months ago, hoping to pull his ex-Soviet neighbor away from the West and back into Russia’s sphere of influence. (…)

Johnson’s trip to Kyiv followed one Thursday by the leaders of Germany, France, Italy and Romania, who pledged to support Ukraine without asking it to make any territorial concessions to Russia.

While Ukraine’s entry into NATO is currently not one the table, its it worth noting that the EU-membership also has a NATO-like mutual defense clause which obliges all signatory nations to come to the aid of a member who faces attack from outside.

After 114 days of bloody fighting, both sides have suffered heavy loses in terms of military manpower. While Ukrainian sources put total Russian losses up to 33,350 as of June 18, those claims cannot be independently verified.

The prominent German weekly Der Spiegel commented Thursday, that Moscow is pulling “out all the stops to find fresh troops.” Across Russia, “from Kaliningrad in the west to the eastern region of Amur, men of fighting age are being summoned,” the weekly added.

Russia is moving more fresh to eastern Ukraine, the DC-based think tank Institute for the Study of War (ISW) claimed.

The Kremlin are deploying more troops along Ukraine’s eastern flank in an effort to bolster their operations in the Severodonetsk and Lysychansk area, the Institute for the Study of War (ISW) reports.

“The Russian military has concentrated the vast majority of its available combat power to capture Severodonetsk and Lysychansk at the expense of other axes of advance and is suffering heavy casualties to do so,” the ISW reported.

Wm. Empson wrote that ancient Egyptian had a word meaning woman or child. He tried guessing what it was used for. “No good for fighting” perhaps, he guessed.

When all is said and done, despite the Ukrainians’ undeniable bravery and obvious sacrifice, Russia will likely lop off a nice chunk of the eastern part of the country. What an appalling and indefensible failure of American deterrence; a failure that is fairly laid at the feet of the dotard-marionette currently occupying the White House geriatric ward.

NATO is proven to be utterly useless, if it won’t actually raise a finger to respond to Russian belligerence.

Ukraine is not in NATO.

Why is every fight our fight?

You sound like an America-Firster the day before Pearl Harbor.

Ok. Why is this fight our fight? Just what national interest is involved here?

No, you dumbass. And we didn’t look to fight in the ear, bit was dragged into it by Japan. Are you hoping China bombs San Francisco?

Ukraine is not worth the life of a single American soldier.

Sure, I know that Ukraine isn’t a NATO member. My general point is, what the hell is the point of having a grand military alliance that is intended to deter Soviet/Russian aggression, if it won’t actually lift a finger to stop that aggression? Might as well disband it. It’s a farcical institution whose fecklessness has already been exposed.

But, again, I emphasize that resolute leadership from the White House would have deterred Putin’s belligerence. As President Trump’s tenure proved.

Not every fight is the U.S.’s fight. Of course, our interventions should be prudently made and strategically-grounded. Thai said, I think it’s important for the U.S. to stand up to defend freedom and to stand up against the major totalitarian regimes (e.g., China, Russia, Iran), when they’re brazenly attempting to bully and impose their will on other nations. This was an uncontroversial and widely-accepted principal under Ronald Reagan’s leadership, and, it’s one that I agree with. And, Neville Chamberlain’s example demonstrated that appeasement of dictators never leads to anything good.

The Ukraine is no more “free” or “democratic” than Russia. Just about every negative thing you can say about Putin and his cronies goes double for Zelensky and his cronies.

Why would NATO respond militarily to Russian belligerence not directed at members of NATO? It’s well past time to stop using the military to act as enforcers and as collections thugs on behalf of the proponents of the ‘rules based international order’.

See my comment, above. When do you think totalitarian dictators should be confronted? I mean, please articulate the precise conditions. I’m curious what those are. You seem to be setting the bar pretty high. So, an attack on a NATO member or U.S. territory or assets results in NATO/U.S. retaliation, but Putin should be free to pillage and invade non-NATO members unmolested, as free as he pleases? What kind of message does that send to the world’s rogue actors and bullies?

The only totalitarian dictator is Zelensky, who was installed in a foreign backed color revolution and subsequently banned all criticism of the government and all opposition political parties.

I didn’t create the standard or raise a high bar, though I do agree with it. The USA has a Constitution which vests Congress with the power to make and declare war. That’s pretty simple.

In general I prefer to use Washington’s guidance re entangling alliances; avoid them. Use the oceans as a buffer. Place the interests of the American people above all else. Certainly above that of acting as the enforcers of globalism.

Other Nations can choose to build a military of their own. They could avoid PO bigger, stronger neighbors via diplomacy. Resisting the siren call of being used by some western institutions to fight a proxy war would be a very good idea.

The preferred message to the world should be based on Theodore Roosevelt’s dictum ‘speak softly and carry a big stick’. IOW, we should be humble and pragmatic, avoiding provocation. When attacked we should ensure a victory so devastatingly complete that other Nations and non State actors give great pause for an entire generation before risking our wrath.

“When do you think totalitarian dictators should be confronted?”

By your standards, maybe the UN should invade America?

Again, I emphasize that effective leadership from the White House would ideally act (and, has acted as such, in the past, when credible Presidents occupied the White House) as a deterrent against foreign bullies’ belligerence, such that intervention wouldn’t even be necessary, because the bullies would restrain their worst behavior.

This statement I can agree with.

“men of fighting age are being summoned,”

We haven’t heard about any family members, who have completed their draft obligation being called up. This must be reservists.

The quote is from Der Spiegel. The article refers to reservists and those with previous military experience.