Day 100 of the full-scale invasion. 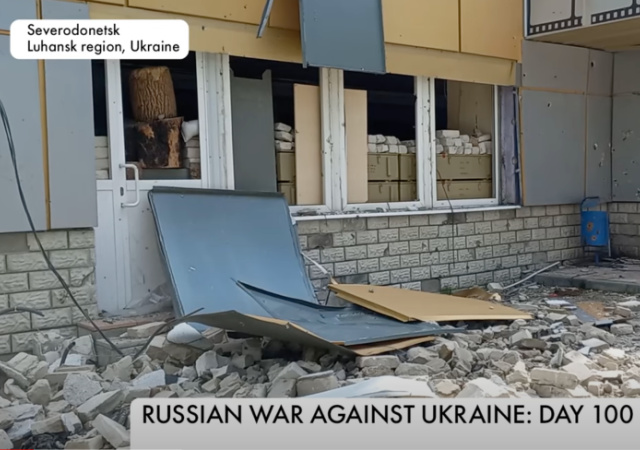 Day 100. Russia is still shelling Severodonetsk and will likely swallow up Donbas soon.

It’s nothing to get excited about because the sanctions do not hit pipeline oil. The bloc also did not sanction Russian Orthodox Patriarch Kirill:

Hungary, which earlier this week won a broad exemption from the oil embargo sanctions, opposed his inclusion on the sanctions list, leaving diplomats with the choice of holding up the whole package or agreeing to Hungarian Prime Minister Viktor Orban’s latest demand.

The centerpiece of the sixth package is an EU oil embargo that will cover 90% of the bloc’s oil purchases from Russia by the end of the year, EU officials say.

Under the measures, the EU will impose a phased-in ban on Russian crude and refined fuels that arrive on ships, which account for at least two-thirds of imports from Russia. By the end of the year, with Germany and Poland also pledging to stop buying oil via pipelines, the embargo should cover 90% of previous Russian oil imports.

By exempting pipelined oil, Hungary and several neighboring landlocked EU member states can still buy Russian oil and there is no deadline for the exemption. However EU leaders said when they met on Monday they would return to the issue of the exemption’s duration as soon as possible.

Russia controls most of Severodonetsk. Ukraine claims its soldiers have had some success in the east, but it might not be enough:

We’ve reported extensively on Russia’s campaign to take eastern Ukraine, which has largely been seen via attacks on the city of Severodonetsk and helped Russia secure around 20% of overall Ukrainian territory.

Sharing his piece on the situation in Severodonetsk – the easternmost city still under Ukrainian control – Luhansk’s governor Serhiy Haidai said in a Telegram post that fighting raged on.

Alongside photos of damaged buildings, Haidai recalled a number of air attacks in recent days. He said the blasts led to almost 30 homes being destroyed across the region and the death of a resident in Lysychansk.

He also listed various eastern towns and villages, saying they too had been hit by Russian airstrikes, but did not provide further details.

The BBC has been unable to independently verify these claims.

Civilians have taken cover in a chemical plant in Severodonetsk. Officials fear it could become another Azovstal, the steel plant in Mariupol.

Again, no one thought through the sanctions. We might not get a lot of grain and food from Russia but places like Africa rely on these items:

More talks are needed on allowing exports from Russia as part of an accord to resume Ukrainian food exports, Amin Awad, the United Nations crisis coordinator for Ukraine said amid the looming global food crisis, which has been exacerbated by the war.

President Vladimir Putin will today host the head of the African Union, the Senegalese president Macky Sall, to give him an “exhaustive” explanation of what is really happening with Ukrainian grain, the Kremlin said.

Cereal prices in Africa, the world’s poorest continent, have surged because of the slump in exports from Ukraine.

President Volodymyr Zelenskyy said, “Victory will be ours. Glory to Ukraine!”

I’m not sure which entity is the schizo; Russia, UN, Ukraine, or EU.

It came out the other day that India is apparently buying Russian oil and reselling it to countries that have an ’embargo’ on Russian oil.

Not only are they NOT stopping the sale of Russian oil, they’re paying a premium for it.

Does anyone else have a problem separating the grain from the huge amont of chaff?

I wonder when the people are going to realize what a con-man and fraud Zelenskyy actually is and stop with this lunatic hero worship nonsense.

And really, what is the point of always including the YouTube Ukraine live feed. All that it seems to show is a peaceful city with people going about their daily lives with the same audio track on each view. Nothing seems amiss. Nothing seems wrong. If you knew nothing else but what you saw you’d hardly come to the conclusion that there was an ongoing war happening in the Ukraine. So what’s the point of showing it? Who knows.

It’s true that he’s not a hero. Not sure why that got you a downtick. I think he is the face of Ukraine like it or not and that represents resisting Russia’s attempts to start WW3, so there is a decent reasoning behind it.

Not quite certain that it’s “…Russia’s attempts to start WW3…”
I always wondered whether or not the bull would charge the matador if the picadors didn’t get it going in the first place. NATO (driven by the US) has been going out of its way to irk Russia for a few years now. (And No! I’m not a Russian troll)

WW3 was a transcontinental conflict between People of Brown and Black and White during Obama’s administration in WWSprings (e.g. Iraq War 2.0, Syria, Libya, Egypt).

Did you notice that countries on the “Dark Continent” need 99.99% “honkie cracker” countries to feed them?

Well, they used to have a couple of “honkie cracker” countries in Africa that took care of a lot of that, but the American left didn’t approve of them so they’re gone.

There you go; Noticing Things.

They switched from foodstuffs to more lucrative cash crops partly as a response to more trade opportunities of post cold war globalization. Not for nothing but we don’t make a great many things in the US anymore for many of the same reasons. Simple things like fertilizer and aspirin so we probably shouldn’t go too far down the road of ‘you aren’t a real country if you can’t produce X domestically’.