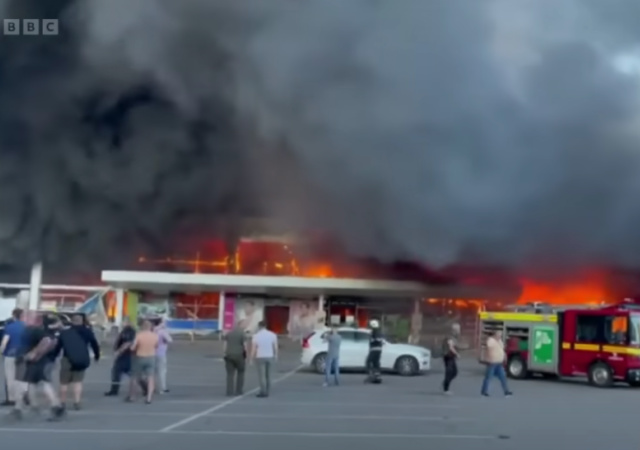 The Russian Defense Ministry claimed responsibility for the missile that struck a mall in Kremenchuk, a central Ukrainian city.

Kyiv said 20 people died. As you can see, Kremenchuk is not near Donbas. 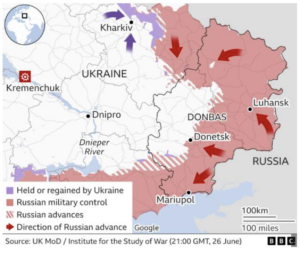 Ukrainian officials said at least 20 people died in Monday’s air strike on Kremenchuk, 25 were being treated in hospital and 40 were missing. Rescue workers are still searching the site and authorities expect the death toll to rise.

The attack, which is likely to lead to one of the worst civilian death tolls in a single strike since Russia’s invasion of its neighbour in February, was the latest in a series of missile strikes in a conflict that shows no sign of abating.

Dmitry Peskov, spokesman for Russian president Vladimir Putin, said the war was going “according to plan” and that it would only end once Ukraine capitulated to Moscow’s demands.

“The Ukrainian side can end everything by the end of today. They just need to order Ukrainian troops to lay down their weapons and fulfil Russia’s conditions. And it’ll all be over,” Peskov told reporters.

Putin’s conditions for ending the war have been vague throughout the conflict. Peace talks collapsed in the spring as Russia hardened its stance on seizing more territory.

Strongly worded letters and statements. Look, unless you actually plan to do something, don’t give Ukrainians hope you will do something.

The statement said: “We will stand with Ukraine for as long as it takes, providing the needed financial, humanitarian, military, and diplomatic support in its courageous defence of its sovereignty and territorial integrity.

“We are ready to reach arrangements together with interested countries and institutions and Ukraine on sustained security commitments to help Ukraine defend itself and to secure its free and democratic future.”

“The G7 stands united in its support for Ukraine,” Scholz told a press conference after a summit of G7 leaders.

“We will continue to keep up and drive up the economic and political costs of this war for President (Vladimir) Putin and his regime.”

French President Emmanuel Macron said that Russia’s strike this week on a Ukrainian shopping mall was a “war crime” and that France would keep supporting Ukraine for as long as necessary.

“Russia cannot and must not win this war,” Macron said at the G7 summit in Germany.

Russia’s defence ministry has claimed responsibility for yesterday’s deadly bombing on a shopping centre in the Ukrainian town of Kremenchuk but insisted it did not know what the mall was open, reports Nataliya Vasilyeva.

Igor Konashenkov, spokesman for the Russian military, said on Tuesday morning that Russia on Monday used “high-precision weapons” to target hangers at a local factory storing fresh ammunition and weapons supplies from the US and Europe.

Mr Konashenkov said the Russia airstrike destroyed the weaponry that was bound to be sent to the eastern Ukraine, the epicentre of the war’s heaviest fighting.

He admitted that the shopping centre went on fire because of the Russian attack but insisted that Moscow thought it was shut down.

“Ammunition for Western weaponry stored at the warehouse denoted, causing a fire at a shopping centre nearby that has not been operational,” he said.

This is nothing new and certainly not unique to this conflict.

There are numerous other wars in progress… but centered on POC v. POC conflicts so that the only reason to follow would be some “Post-colonial” diatribe.

If collateral damage were not a concern, they would be far better off using conventional hypersonic kinetic missiles to open mass abortion fields, and follow the Sino-western example and normalize planned parenthood and planned parent/hood services in the population.

Holy shit, what a fraud and incompetent leader. His country is at WAR with Russia but yet he allows “more than 1,000 people” to congregate in a mall. It’s as if Zelenksyy is deliberately allowing such things to happen specifically to generate more casualties and publicity for himself. Too bad that it’s innocent civilians that have to suffer for Zelenskyy’s massive ego trip. It’s time for the international community to tell him to end this war (a war Zelenskyy is going to lose in the end in any case) and spare his citizens further death and destruction. But there we go and here we are.

Yesterday I read someone use Tass as a reliable source for information. Now I see you apparently believe Zelenskyy should shut down all commerce in the entire country because the Russians are still invading in the East. Well that is certainly a play out of the Socialist/Communist (AKA Democrat) Party playbook so I guess there’s precedent of a sort. Pathetic.

The west particularly the American public doesn’t get the reality of war. The US hasn’t fought a war on US soil since 1865. Terrorist attacks sure but no sustained conflict. Apart from those of us who have been to war or seen the results of one via service with an NGO in some horrible place the American public has no first hand experience.

These posturing chicken hawks always demanding we send our kids to fight the wars they blunder into or create for ‘reasons’ are yet again leading us down the prim rose path. Wars are incredibly destructive. Infrastructure ruined, people displaced, wounded, maimed and killed. It’s ugly. It’s a Hobbesian state of nature; nasty, brutal and often life is short.

We should not jump into any conflict that doesn’t present a direct threat to the USA. Interests defined as the welfare of average citizens not some globalist utopian ideal and certainly not because the neo cons and uniparty want one. We have to stop drinking the kool aid and view this, as we should view every policy, through a lens that displays whether the average US Citizen will be helped or harmed.

That said, I’m not fully certain in this conflict that the Russians are not the lesser evil. (Don’t anyone take that to mean I support them in any way- I don’t)

The Gulf war, it’s extraordinary low coalition casualty rate and the clinically presented images and briefings by Gen Schwartzkopf plus video games give a false impression.

Our political class and establishment exploit the lack of knowledge and follow up by waving the bloody shirt of ‘democracy, aggression and violation of norms’. People fall for this propaganda and it continues because it’s effective. Those of us who offer any caution get accused of all sorts of vile slurs and slanders.

It’s tiresome, especially when it’s being generated from inside the populist right, MAGA movement or DJT voter who should know better than to agree with likes of Graham, Kinzinger and Cheney about foreign policy and overseas adventures. The uni party establishment and rinos do not have the best interests of the average American Citizen foremost in their minds.

The US blew up and bulldozed thousands of soldiers… “The Highway of Death” back toward Baghdad. Actually, in a war setting, that is to be expected and accepted. In the “old” days, our enemies knew that this would be their fate…. not today and not with Biden. Hold out long enough and US largess is on the way.

Selecting a one sided killing spree which was the next thing to a slaughter as your example proves my point. That isn’t how battles are normally fought, it was an anomaly Though I thank you for making my point about how some people are seduced by propaganda.

We stacked the bodies pretty damn high in Iraq and Afghanistan as well, though most of that wasn’t recorded much less released. I assure you our Soldiers and Marines were quite capable killers in Iraq, Afghanistan and a few lesser known conflicts.

Still that wasn’t against a peer. Conflict between peers or near peers as we see in Ukraine is a very different sort of animal. The hybrid high intensity conflict and asymmetric warfare in Ukraine is what a modern war looks like. Very destructive with high casualties.

In the old days we had an insurmountable tech advantage. The Gulf War was the high water mark of modern US military power from a comparative standpoint of the war fighting capabilities of other Nations. Our total force is about 60% the size of the old days. Our tech advantage has diminished. So please keep all that in mind before urging our political class to flex on another Nation.

At the beginning of the war the Ukraine made a conscious decision to use civilians and civilian infrastructure to shield their military operations. If you pay close attention to photographs and news stories you’ll find that it’s routine for the Ukraine to move soldiers in yellow school busses and unmarked civilian cars, to park artillery and tanks next to civilian houses, behind apartment buildings, etc. They’re using every town in the Donbas as a fortress. So does anyone doubt that the Ukraine really was storing ammunition and weapons next to a strip mall? In a way you can’t blame them, as it’s the only way for them to have a chance given the Russian disparity in long-range weapons. But it’s another thing entirely to pretend the civilian deaths are the Russians’ fault.

As an update, the New York Times has CCTV footage showing the missile hit the factory/depot/whatever it is—on opposite side from the mall. According to google maps, the location of the strike is 500+ yards from the mall. Presumably the mall was damaged by secondary explosions (or possibly another missile, but there doesn’t seem to be any evidence of that).

So you might want to reconsider referring to the Russians as “monsters” in this instance?

So the shopping center was incidental. There were arms stored nearby and those were the intended target.
This war was brought to us by Biden.

I wouldn’t be terribly surprised if Uncle Vlad’s objective were the eastern side of the Dneiper from that spearpoint bog at the southern end of Belarus to the westernmost mouth of the estuary stopping short at Sychavka.
I certainly would if I were he: just my thoughts.

Ironically, while the West tries to turn every unfortunate event like this mall bombing into a “war crime,” there is some suspicion that Russia may be committing real war crimes by “disappearing” captured neo-Nazi militia and foreign mercenaries. Or, as the Russians jokingly call them, “pirates and electricians” due to their Nazi death’s head and SS lightning bolt tattoos.

But accusing Russia of such a war crime would mean Zelensky has to first admit his army includes Nazis.

If we had a real man in the white house, Russia would never have invaded Ukraine.