A 7-year-old girl lost her father. 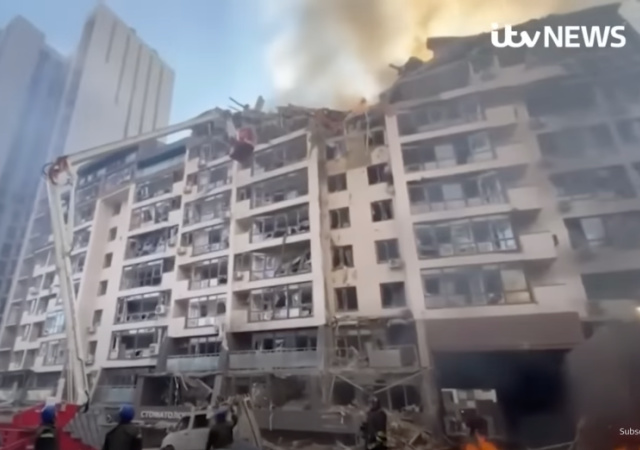 I’m back covering Ukraine after two weeks on the road. Vijeta covered the attack on Kyiv by Russia. It’s the first time in weeks that Russia has attacked Kyiv.

We learned at least one person died in the attack.

Lysychansk is the last major city in Luhansk held by Ukraine. Russia wants it:

Russian forces were fighting on Monday to achieve one of their strategic objectives in Ukraine as Moscow-backed separatists said they were pushing into Lysychansk, the last major city still held by Ukrainian troops in eastern Luhansk province.

Lysychansk’s twin city of Sievierodonetsk fell on Saturday in a victory for Moscow’s campaign to seize the eastern provinces of Luhansk and Donetsk on behalf of pro-Russian separatists.

Tass news agency on Sunday quoted a separatist official as saying Moscow’s forces had entered Lysychansk from five directions and were isolating Ukrainian defenders. Reuters could not confirm the report.

The General Staff of Ukraine’s Armed Forces said Russian forces were using artillery to try to cut off Lysychansk from the south but made no mention of separatists entering the city.

Ukrainian President Volodymyr Zelenskyy asked the G7 leaders to help the war end by the end of 2022:

Zelenskyy “had a very strong message that we must do everything possible to try to end this war before the end of the year,” the sources said. He also stressed the importance of “not lowering the pressure and continuing to sanction Russia massively, heavily”.

The West has already adopted several packages of measures since the start of the Russian offensive on Ukraine on 24 February.

During his speech, the Ukrainian president “spoke of the harshness of winter” in Ukraine “where it is more difficult to fight”.

“At the end of the year, we will enter a situation where positions will be frozen,” the sources said.

According to a European official quoted by Reuters, Zelenskyy also called for anti-aircraft defence systems, security guarantees, as well as help to export grain from Ukraine and for reconstruction aid.

One Killed in Kyiv

A 7-year-old girl lost her father. From The New York Times:

A 7-year-old girl was rescued from the rubble, the authorities said. Her father was killed, and her mother, a Russian citizen, was injured. The top three floors of the nine-story building in the Shevchenkivskyi district were destroyed, they said.

“There are people under the rubble,” Vitali Klitschko, the mayor of Kyiv, said on Telegram. “Two victims were hospitalized.”

Residents of Kyiv reported four explosions Sunday morning, a day after a barrage of Russian missile strikes across Ukraine. The attacks came as leaders of the Group of 7 of the world’s wealthiest democracies prepared to meet in Germany, and Ukrainian officials said they believed Moscow was attempting to send a message to Ukraine and its Western allies.

Ukraine’s foreign minister, Dmytro Kuleba, tweeted that the child rescued on Sunday “was sleeping peacefully in Kyiv until a Russian cruise missile blasted her home.”

“Many more around Ukraine are under strikes,” he wrote. “G7 summit must respond with more sanctions on Russia and more heavy arms for Ukraine.”

Yuriy Ignat, a spokesman for Ukraine’s Air Force Command, said that Russia had used long-range missiles fired by aircraft flying over the Caspian Sea, which lies more than 900 miles southeast of Kyiv.

Mariupol is a Third-World Country

Mariupol still has 120,000 trapped in the city. The mayor said it has no water and garbage covers the streets:

Speaking on Friday, Boichenko said that 120,000 residents of the city are trapped, unable to escape. He added that the sanitary situation in the city is becoming critical.

“Garbage has not been taken out since February. Thousands of tons of garbage lie on the street, rotting. The sewer does not work. There is no water,” he said.

Boichenko is no longer physically in the city, but he provides updates on the conditions inside the city from sources and information he receives.

According to those sources, Russian forces have “distanced themselves from the locals because they are afraid of getting infected.”

Boichenko added that he is unsure if diseases may be spreading around the city.

The United States has imposed unprecedented costs on Putin to deny him the revenue he needs to fund his war against Ukraine.

Together, the G7 will announce that we will ban the import of Russian gold, a major export that rakes in tens of billions of dollars for Russia.

The U.S. and the other six countries in the G7 vowed to ban gold imports from Russia:

Russia is one of the world’s biggest gold producers, and the metal is its second most valuable export after energy products. Most of those exports go to G7 countries, particularly Britain, through the gold trading hub of London.

Prime Minister Boris Johnson of Britain said in a statement on Sunday that the actions taken against Russian gold would “directly hit Russian oligarchs and strike at the heart of Putin’s war machine.”

“We need to starve the Putin regime of its funding,” he added. “The U.K. and our allies are doing just that.”

The gold sanctions follow extensive steps to cut Russian export revenues. The United States banned oil and gas from Russia, and Europe will prohibit most Russian oil while reducing gas imports. The United States, the European Union and their allies have also placed sanctions on Russian officials and other members of the elite and imposed punishments on Russian banks, airlines and other companies.

But Putin’s dead and we are seeing his body double.

Russia is losing and doesn’t have any more soldiers.

If this is “losing” imagine what would be happening if Russia was actually “winning”.

These “sanctions” will affect Russia like showering ducks with a garden hose will.

“These “sanctions” will affect Russia like showering ducks with a garden hose will.”

I hope we all enjoy buying Russian Gold from an Indian corporation brought to us on a Greek ship; uhhhmmmmm getting Ukraine into NATO was somehow worth this cost in Ukrainian lives and Western economic decline?????????? By the way how good are human rights in South Africa (bad) and Zimbabwe (bad)?

Get the Progressives out of Foggy Bottom and we might manage it.

And one that forces the scions of the establishment to fight on the front lines of the wars they begin. JAG service in the reserve while honorable in itself doesn’t count for this metric. Service in an Infantry, Armor or FA BN for a normal length combat assignment would suffice. No 60 day, get the elite guys kid a CIB and Bronze Star then send him home BS. Which actually happens.

I agree 100% and personally think this country lost a lot when it did away with the draft.

Disagree. A volunteer force is an important check on an Admin starting unpopular wars. Selective Service registration for both men and women? Sure (here’s some of that equality you wanted ladies)

Then when authorized by Congress invoke a draft when absolutely required to achieve victory but that would also mean the scions of the elite would be pressured into joining. The appetite to do so would be tempered because women would be drafted as well.

Anything we do to deter a draftee Army isn’t a bad idea. If we are entering an unpopular war that lacks broad support so much that our, frankly too large by any historical measure standing Army, can’t handle it and can’t attract enough volunteers then perhaps that’s a very good reason not to fight that particular war?

Wow, a war where individual casualties get reported. So stressful.
It seems Russia isn’t prosecuting anything like “total war”.

Sucks to be that kid, but I’ll wager Russia didn’t launch four missiles at Kiev to “send a message.” They were more likely targeting legitimate military assets.

It’s been reported that NATO intelligence personnel are in Kiev, assisting the Zelensky regime with NATO spy satellite data.