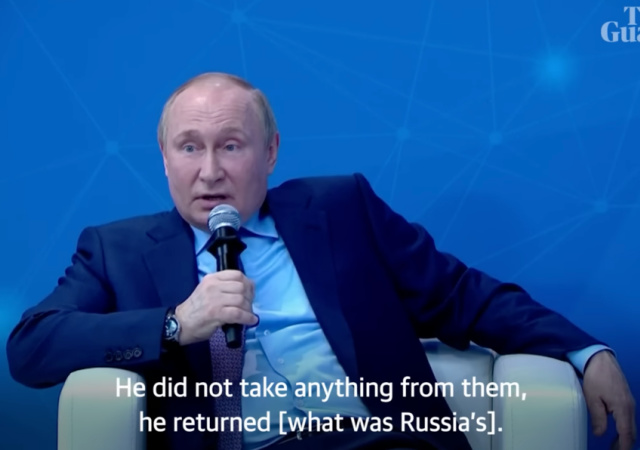 It’s been weird driving for five days and not paying much attention to Ukraine. I miss it. We must remember we are embedded in this war. We might not have an interest in the war but the war is interested in us.

It’s Mariupol all over again. Russia cut off an escape route by blowing up a bridge:

Ukrainian and Russian forces were still engaged in street by-street fighting there on Sunday, said the governor of Luhansk province, Serhii Haidai.

Russian forces have taken most of the city, but Ukrainian troops remain in control of an industrial area and chemical plant where hundreds of civilians are sheltering.

But the Russians had destroyed a bridge over the Siverskyi Donets River linking Severodonetsk with its twin city of Lysychansk, Haidai said.

That leaves just one of three bridges still standing and reduces the number of routes that could be used to evacuate civilians or for Ukrainian troops to withdraw to positions on the western side of the river.

In Lysychansk itself, Russian shelling killed one woman and destroyed four houses and a shopping centre, Haidai said.

Russia supposedly destroyed a warehouse holding US and EU weapons:

As we reported earlier, Russia has carried out a rocket attack on the western Ukrainian city of Chortkiv that partly destroyed a military facility and injured 22 people, including a 12-year-old child.

Now, Russia’s defence ministry says it destroyed a “large depot of anti-tank missile systems, portable air defence systems and shells provided to the Kyiv regime by the United States and European countries” during the attack.

The BBC has not been able to independently verify these claims.

Russia Day is the national holiday for the Russian Federation celebrated on June 12 since 1992. It’s the date of the formation of the federation after the fall of the USSR, which actually took place on June 12, 1990.

Russia Day was celebrated in occupied parts of Ukraine, including the ravaged port city of Mariupol, on Sunday.

A new city sign painted in the colours of the Russian flag was unveiled on the outskirts of Mariupol and Russian flags were flown on a highway leading into the city.

While at one of the central squares in the city of Kherson, Russian bands performed a concert to mark the day.

Ukrainian media reported that few, if any, local residents attended the Russia Day festivities in the Russian-occupied cities.

Russia even gave out passports to Ukrainians:

Moscow officials have begun issuing Russian passports to Ukrainian residents who applied for citizenship, as Russia seeks to solidify its rule over captured parts of Ukraine.

Russian news agency RIA Novosti posted a video of a Moscow-backed official congratulating new Russian citizens and telling them: “Russia will not go anywhere. We are here for good.”

Moscow has also introduced the ruble as official currency in captured Ukrainian cities in the south and east.

The human rights organisation said it had found evidence of Russian forces repeatedly using 9N210 and 9N235 cluster bombs and scatterable land mines in Kharkiv, all of which are banned under international conventions.

Cluster bombs release dozens of bomblets or grenades in mid-air, scattering them indiscriminately over hundreds of square metres.

“The repeated bombardments of residential neighbourhoods in Kharkiv are indiscriminate attacks which killed and injured hundreds of civilians, and as such constitute war crimes,” Amnesty said in a report on Monday.

“This is true both for the strikes carried out using cluster (munitions) as well as those conducted using other types of unguided rockets and unguided artillery shells.

“The continued use of such inaccurate explosive weapons in populated civilian areas, in the knowledge that they are repeatedly causing large numbers of civilian casualties, may even amount to directing attacks against the civilian population.”

The report, called Anyone Can Die At Any Time, details how Russian forces began targeting civilian areas of Kharkiv on the first day of the invasion on February 24.

According to Kharkiv’s Military Administration, 606 civilians had been killed and 1,248 injured in the region since the invasion began.

Ukraine has two grain routes through Poland and Romania. I hope this helps the food crisis:

Ukraine is the world’s fourth-largest grain exporter and it says millions of tonnes of grain are sitting in warehouses and Ukrainian ports unable to be exported due to the war.

Ukraine was in talks with Baltic states to add a third corridor for food exports, Senik said.

“Those routes are not perfect because it creates certain bottlenecks, but we are doing our best to develop those routes,” he told Reuters.

It comes as the World Trade Organization warned that a food crisis kicked off by the Ukraine war could last for years without intervention.

Putin needs to be removed by any means necessary. Also, destroy his pipeline to Europe, cut off the cash flow.

It’s not that the events in Ukraine are ‘interested in us’ that’s the problem. The broader impacts are manufactured by the policy choices our leadership have imposed. Absent those the impact would be lessened.

The Ukrainian govt spiked a proposal to use the port of Odessa to ship grain offered by Russia and Turkey. Recall that the Ukrainians mined the harbors including Odessa which currently prevents use of the ports. Those who claim to be upset about food shortages but seek to blame only Russia/Belarus should instead add this to the roster of policies imposed by Ukraine and NATO that are directly making the crisis worse.

The next few weeks will very likely see the Donbas as a whole in Russian hands as well as a coastal corridor along the Sea of Aviv linking Crimea. At that point it would be wise for the West to reevaluate the calculus of this conflict and the sanctions regime with the leadership making their case directly to the people and their representatives for approval in continuing their to date failed policies at deterring or preventing Russia.

In the face of all of this, could someone explain the function of the United Nations?

It is something populist politicians can point to and say “get us out of the”. Then, when in office and holding a majority, do nothing.

It is also a terrific drain on the US taxpayers.

To take everything you have

As long as I can remember, the primary function of the UN has been to condemn Israel.

Ukraine has long been a crime syndicate with a flag. The CIA orchestrated coup in 2014 toppled the elected govt. and installed Ukraine oligarch, and govt. gadfly, Petro Poroshenko, on the throne. It’s where the Biden crime family laundered their dirty Chinese money with impunity, and Pelosi, etc. could install their kids, along with crackhead Hunter, in million dollar ‘oil exec’ jobs. Zelenski is their current corrupt puppet.

Moreover, Ukraine is a decade old proxy war between the CIA & pro-Russian separatists in Donbas (eastern Ukraine). This Radio Free Europe article, ‘Death Toll Up To 13,000 In Ukraine Conflict, Says UN Rights Office’ is from 2019. Until 5 seconds ago, no one gave a crap about Ukraine borders, Russian aggression, 13,000 dead, Humanitarian relief, etc.

Meanwhile, our wide open southern is constantly invaded by millions of illegal aliens because Congress couldn’t spend 5 billion for a border wall, but can ship buttloads of cash to Ukraine to defend its border. I care nothing for Ukraine.

We have been lied to.
Yet, we continue to believe the lies.
But the truth is Ukraine is a lost cause.
Yet Biden has made it his priority.
But Biden’s priority is not be our priority.
We need to re-evalutate our priorites.
In order to do that, we need a new president with new priorities.

There is not much time left. We are at the point in our history where a few voices are calling out, “Iceberg. Iceberg. Change course!” But the effort of many is to re-arrange the deck chairs.

Peabody. Who is this we you speak of?

I have a mouse in my pocket.

No, Roger Rabbit was in his pocket…..

Cute response, but you will continue to believe lies.

Russia is winning.
This isn’t a popularity conteset…
It is a fact.

Biden needed the invasion to destroy all evidence of his corruption.
The Man sacrificed an entire Nation to cover his ass.
Pure evil.

“In Lysychansk itself, Russian shelling killed one woman and destroyed four houses and a shopping centre…”

Remind me again what happened to Baghdad on the first night of “Shock & Awe” in 2003.