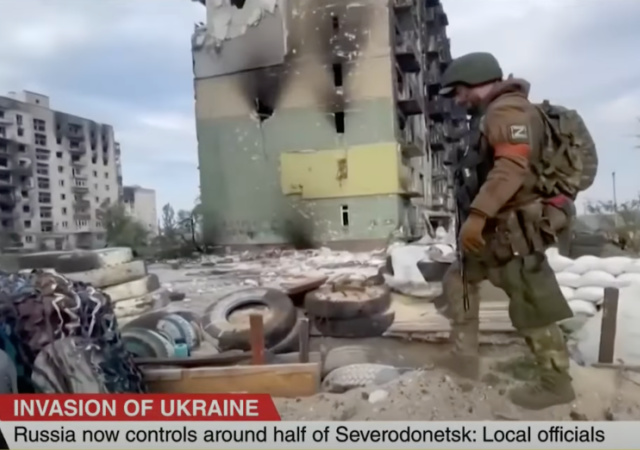 Day 98. President Joe Biden wants to embed us deeper into the war between Russia and Ukraine by sending Kyiv advanced rockets if they promise not to bomb Russia with them.

Local governor Serhiy Gaidai admitted the Ukrainians will likely have to abandon Severodonetsk, which would mean Russia basically owns the Luhansk region:

In a post on the Telegram messaging app, Ramzan Kadyrov, the Chechen warlord, said his troops had reached the centre of Severodonetsk and were marching towards the industrial area where soldiers and civilians were said to be sheltering.

With Kyiv’s remaining resistance fighters almost encircled by Russian units, the region’s governor conceded that they may have to retreat to safety across the Siversky Donets river.

Serhiy Haidai said crossing the river to Lysychansk could allow Ukrainian forces to limit losses on the battlefield as Russia intensifies its attempts to capture the city.

“Our troops still remain in the city and for the time being are still resisting the Russian army,” Mr Haidai told the BBC. “But if they need to withdraw to the other side of the river, closer to Lysychansk, in order to preserve troops then they will probably do so.”

Mr Haidai later added that Russian forces now controlled “most” of Severodonetsk, adding that “90 per cent” of the city was destroyed.

Biden supposedly wrote this op-ed in The New York Times. I doubt he actually wrote it, though (emphasis mine):

As President Volodymyr Zelensky of Ukraine has said, ultimately this war “will only definitively end through diplomacy.” Every negotiation reflects the facts on the ground. We have moved quickly to send Ukraine a significant amount of weaponry and ammunition so it can fight on the battlefield and be in the strongest possible position at the negotiating table.

That’s why I’ve decided that we will provide the Ukrainians with more advanced rocket systems and munitions that will enable them to more precisely strike key targets on the battlefield in Ukraine.

We will continue cooperating with our allies and partners on Russian sanctions, the toughest ever imposed on a major economy. We will continue providing Ukraine with advanced weaponry, including Javelin anti-tank missiles, Stinger antiaircraft missiles, powerful artillery and precision rocket systems, radars, unmanned aerial vehicles, Mi-17 helicopters and ammunition. We will also send billions more in financial assistance, as authorized by Congress. We will work with our allies and partners to address the global food crisis that Russia’s aggression is worsening. And we will help our European allies and others reduce their dependence on Russian fossil fuels, and speed our transition to a clean energy future.

Biden insisted we do not want a war between Russia and NATO:

We do not seek a war between NATO and Russia. As much as I disagree with Mr. Putin, and find his actions an outrage, the United States will not try to bring about his ouster in Moscow. So long as the United States or our allies are not attacked, we will not be directly engaged in this conflict, either by sending American troops to fight in Ukraine or by attacking Russian forces. We are not encouraging or enabling Ukraine to strike beyond its borders. We do not want to prolong the war just to inflict pain on Russia.

Congress authorized 40 Billion dollars. That’s pretty much a blank check. Time to complain was before the vote. Welcome to Biden’s WW III! We are in deep Kimchi!

Biden’s Strategy is to Force Russia into having too much Gasoline and too much Food. While the rest of the world starves.

Your darts are pretty close to the center of the black.

Has Biden talked to his:
1. SECDEF who proclaimed the US goal was to degrade Russian forces over time
2. CJC who made clear the US wanted a long proxy war
3. SECSTATE who wants a long war to ‘bleed Russia’
4. His own ‘Biden doppelganger’ who raised regime change by declaring in Poland that ‘Putin can not be allowed to remain in power’

After bluntly refusing to look for an off ramp and ramping up the potential for wider conflict it seems the Admin has finally begun to worry about the possibility that even with significant EU, NATO and US opposition a now very hostile Russia achieves it’s primary and secondary goals;
1. Secure the Donbas
2. Area denial if not complete control of the coastal areas

Biden and other western leaders have pushed us towards a multi polar world. There are some 35 Nations mostly NATO/EU who have imposed sanctions or delivered war material to Ukraine. That leaves over 150 Nations not in this largely western coalition who’s goal as stayed by SECDEF was ‘enforcement of the international rules based order’.

3. Capture half of all the weaponry the US sends Ukraine.

Afghanistan 2.0? Sanctions with “benefits”. A double-edged scalpel. They think that they can abort the baby, cannibalize her profitable parts, sequester her carbon pollutants, and have her, too. Yes, they can. Given diverse precedents, they’re probably can.

They can have the baby and keep it too, but it will in the same condition as the president (after they canibalized him and removed his parts only to find they were not profitable)

The US has already sent 1/4th of our Entire stock of Javelin Missiles and 1/3rd of all our Stingers. And, Stingers have not been produced for almost a decade. When US missile makers looked at restarting the line they realized that many of the electronic parts were no longer in production or available.

It seems that the same utter stupidity and arrogance from incompetent great power leaders that led the world to a horrific disaster in 1914 is in slow motion moving us close to another senseless wider war. The US strategy seems to be trying to manufacture a bogey man in Putin and Russia to blame all problems on and justify their domestic and international policies. I have no idea what the real situation in Eastern Ukraine is and whether the militias that have been fighting the Ukrainian army since 2014 are Russian agents stirring trouble or Russian speaking peoples fighting for independence from a hostile regime. I do know it was stupid to talk of bringing Ukraine into NATO just like the USSR putting missiles in Cuba was a dumb and unacceptable provocation.

No matter what occurs on the ground in Ukraine at best we are now headed for a severe recession and possibly depression. If Biden keeps driving inflation up and the dollar down we are headed to a very bad place economically perhaps even early 1930’s level.

On the international front the obsession to help Iran develop nuclear weapons certainly means increased conflict in the middle east and perhaps all out war between Israel and Iran possibly involving Saudia Arabia and other nations threatened by Iran. If that occurs the chance of a nuclear strike by Israel to avoid another genocide is not small. Once the genie is out of the bottle who knows what the end will be?

Hopefully we can get by till 2024 and then totally clean house in DC, including cutting some agencies entirely and dispersing most to states far from the elites and bring in new blood from small colleges and universities not beholden to the woke dogma.

Russia is doing what Russia has always done…ground down its opponents.

While not pretty for either side it does get the job done.

What’s all that white stuff on the floor?
That’s the news media after removing the Ukraine whitewash.

Russians love artillery battles. It’s what they do.

Dragging us into the Deep State War

President Zelensky and the rest of the world are kidding themselves if they believe that the war will “only end definitively through diplomacy.” It is a full fledged war and will only end when one of the combatants has been crushed to exhaustion or concedes.

In the final analysis, Russia’s hordes have always been the answer; not its military competency, not its superior weaponry, not the efficient use of its expansive natural resources, just a crude and brutal, mindless and witless battle of attrition. Russian bullying, chest thumping, and extortion work on occasion as a means to get what it wants, but when not, when a hot war breaks out, attrition, the pouring of endless numbers of its citizens into the fray is where they end up – always.

The rapid, complete ostracizing from the world’s organizations and institutions was a good start, but the pressure must be kept up, tightened and extended to others who support Russia – China, Iran, and the (punk) North Koreans. It just could work in the globalized twenty first century. As with all war there will be pain and discomfort if extended to Russia’s supporters, but if thorough and broad enough, it just might work. But for it to succeed the world must have the courage of its convictions to resist push back and threats and cajoling from the others ostracized. There’s little reason to believe it does and barring that nothing else will matter

Diplomacy? No, that’s only after a victory or when someone concedes and the the winner and loser sit down to discuss terms.

Thank you Mr. Bush, when there is nuclear fallout we could all remember how nobly you made ill informed jingoistic rhetoric meant to inspire a war footing.

Russia is getting what it wants. It would have taken more and was caught off guard by Ukraine’s tenacity and bravery. Nevertheless, eastern Ukraine is practically lost. When/if Russia decides to move west in the south to cut off Ukrainian coastal access and protect the Crimea, it will do so. Biden’s gift of new, advanced missiles and armaments (they’re diplomatic overtures) may discourage either of those, or just prolong the agony. Either way, When Russia has accomplished what it wants or feels it can get, it will call for a diplomatic solution. Until then Russia just keeps grinding up its citizens in a war of attrition. Then there’s the never ending speculation about what’s happening internally in Russia, which no one really knows.

The fighting, destruction, and killing will end when Russia says so, global ostracizing of It not withstanding. Would more of that help? Sure, but then, see Germany’s willingness to be without Russian gas or Biden’s pandering to Iran for a examples of a willingness to suffer a bit.

So you are in favor of another cold war by creating a new multi polar world? For reference the US military is roughly 40% smaller than 1992. You volunteering to foot the bill for the difference in cost?

1. We’re living in your “multi polar world” right now, one that’s increasingly bipolar by the day. The unfortunate thing is that it starts right outside our front doors, not at the southern border or an ocean shore line.