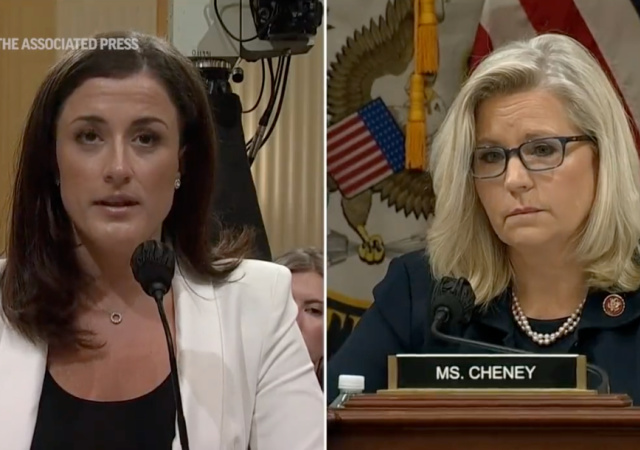 Hutchinson told the committee the notecard had her handwriting. She also said that her former boss, COS Mark Meadows, handed her the notecard and pen. She wrote down what he supposedly said was a statement by Trump about the riot.

Herschmann already told the committee he wrote the note:

“The handwritten note that Cassidy Hutchinson testified was written by her was in fact written by Eric Herschmann on January 6, 2021,” a spokesperson for Herschmann told ABC News Tuesday evening.

“All sources with direct knowledge and law enforcement have and will confirm that it was written by Mr. Herschmann,” the spokesperson said.

Cheney displayed a note today that Cassidy Hutchinson claimed to have written, except White House lawyer Eric Herschmann had already told the committee that he wrote the note in question. pic.twitter.com/77Av0sLaRe

The committee is sticking with Hutchinson’s testimony despite the notecard being the latest portion going down in flames:

In response to Herschmann’s claim, a spokesperson for the Jan. 6 committee said, “The committee has done its diligence on this and found Ms. Hutchinson’s account of this matter credible. While we understand that she and Mr. Herschmann may have differing recollections of who wrote the note, what’s ultimately important is that both White House officials believed that the President should have immediately instructed his supporters to leave the Capitol building.”

“The note memorialized this,” the committee spokesperson said. “But Mr. Trump did not take that action at the time.”

At least two Secret Service agents immediately contradicted Hutchinson’s testimony about the Trump lunging for the steering wheel. A video even shows Trump was in an SUV, not The Beast.

Seriously, no reasonable human can or should expect anything legitimate from this kangaroo investigation at this point.

They don’t even attempt to wear the garment of integrity and not only make no attempt to seek the truth- they deliberately seem to go to great lengths to present knowingly false information and try to sell it to the unwashed masses.

Call it what it is

I REALLY wish that Elise Stefanik was on this farce. She would destroy them.

“My best friend’s sister’s boyfriend’s brother’s girlfriend heard from this guy who knows this kid who’s going with the girl who saw Trump grab the wheel at 31 Flavors last night.”

As I understand it, six more women have come forward with allegations that Trump grabbed their steering wheel.

A nice, unpolished Cedar of Lebanon, perhaps.
Or given that it’s a Democrat committee, whatever will burn nicely.

They don’t have to, the Not-A-Vax has half the population compliant and mind-numbed, thinking this is legit. The [actual] 6% who approve and believe The Hologram and his Handlers are doing a “great job”, are just morbidly stupid, and that’s built into the DNA.

Show.me the man and I’ll make up sh*t to fit the crime.

This chick was their big secret weapon? Damn, “star witnesses” ain’t what they used to be.

She’s not even a witness.

Witness: “a witness is a person who sees an event, typically a crime or accident, take place.”

All hearsay anyway…but since this is a Charade the true believers will lap it up as manna from their Betters…Jim Jones had nothing on the Dem’s.

Now America is going to be amazed to learn about the female equivalent of Skull & Bones, and discover that Hutchinson, Blasey Ford, Swetnick, and Anita Hill all have the rings.

Am 83, a vet, was a school bd trustee, served on multiple marina bds and on and on. I have never seen such blatant flat out lies from supposedly honest competent people in our Gov. Not only do they just say things that fly in the face of known facts but do so with no danger of being called out by the Press. The committee is illegally formed and has spent millions on professionally producing this farce. Sorry kids but you are going to have to work these things out because I am going to my rocking chair.

“Not only do they just say things that fly in the face of known facts but do so with no danger of being called out by the Press.”

Well, when they insist that Rachel Levine is officially a woman, it throws pretty much everything else into the category of “little white lie.”

When is Chaz Bono going to testify?

I can only try to imagine what Schiff’s “conclusively incriminating evidence” is going to be. The lies just keep getting bigger and bigger so I expect it’s going to be one for the ages. “Schiff” is going to become a verb.

If the past is any indicator, you’ll never find out. It’s the Harry Reid School of Character Assassination.

Well, hopefully they all wind up like Hairy Reed did… somebody had enough and beat the fuck out of that lying punk.

Just in case it is not apparent, even Andy McCarthy at National Review is buying this 🐂💩. Just sad how WFB’s legacy is in tatters. He should have folded the whole operation.

I wish Rush was here. His show would be on fire today.

1. National Review is a joke and has been for many years. Just a deep state promoter.

2. McCarthy is a joke and has been for many years. Just a deep state promoter.

Andy McCarthy is just another fraud in Conservative, Inc. that was exposed during the Trump presidency. The NR will hopefully go the way of the Weekly Standard.

Hutchinson is to the Jan 6 committee hearings what Mrs. Magoo was to the Brett Kavanaugh SCOTUS nomination hearings. Same thing all over again.

Like Blasey-Ford – aka The Paid Liar – she’ll be shuffled away to her island hideaway with a fat bank account to sip umbrella drinks by the shoreline, never to be heard from again.

So…
She isn’t in a legal Court.
She isn’t exactly in front of Congress.
If she was sworn… would it even make a difference?
I can’t see what sort of trouble she could possibly get into.

I’m having a hard time figuring out what this circus sideshow is trying to prove with this nonsense. The small number of people paying attention to this will know this person is lying and is being refuted at every turn, people not paying attention don’t care about it.

They are preaching to THEIR choir. They have already made their minds up the OMB is guilty of hurting their fweeelings.

I have a note written by my mommy that says I have an illness that will keep me out of school for a week.