Legal Observers from the National Lawyers Guild attended Dobbs protests, making good on the group’s promise after the leak to stand “with all of you fighting this in the streets and the courtrooms.” 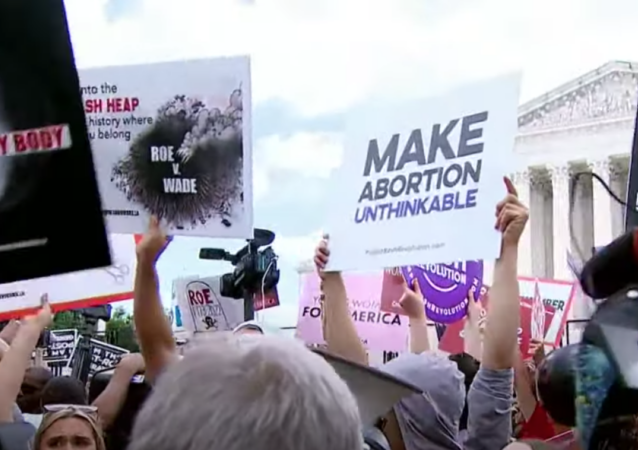 Legal Observers from the National Lawyers Guild attended Dobbs protests, making good on the group’s promise after the leak to stand “with all of you fighting this in the streets and the courtrooms.” Distinguishable by their distinctive lime green hats, Guild observers—one of whom explained that he was there “to essentially monitor police activity because cops lie”—were reportedly detained by police at the Arizona Capitol.

Though many may be unfamiliar with the Guild, the rapidly growing 9,000+ member nonprofit association of lawyers, law students, legal workers, and jailhouse lawyers is conspicuous not only for its bright headgear, but for the left-wing radicalism it espouses. The group responded to the leaked Dobbs draft, for example, by calling it “part of a coordinated, fascist effort to expand state control over marginalized people’s bodies.”

Indeed, the Guild believes that the American government is “based on and dedicated to preserving white supremacy, hetero-patriarchy and imperialism,” and its numerous far-left political positions include calling for the total abolition of police and prisons. It is also notable as one of the relatively few nonprofits to have expressed support for the Antifa movement, promising to “continue to support anti-fascists and anti-racists in the street and in the courts.”

Legal Observers from the Guild volunteer to attend demonstrations in order to monitor and document the actions of law enforcement (but not protesters), as well as to provide support for those who are arrested—including connecting them to bail funds and other legal defense resources. The Guild’s presence at these events is anything but neutral, and it will only provide support to protests “that directly align” with its far-left values.

By its own figures, the impact of this support has been substantial. In 2020 alone, the Guild claimed to have “coordinated legal support” for more than 20,000 arrested demonstrators. It subsequently demanded that all federal charges be dropped against hundreds of arrestees who were facing them for their alleged criminal actions during that year’s Black Lives Matter protests.

As it happens, the Guild has a long and interesting history of serving as a legal support system to America’s far-left. That history—which winds through the Communist Party and McCarthyism, to the New Left and the Weather Underground, and much more—is available at InfluenceWatch here. Many of the fringe left’s other modern manifestations also draw upon this same legacy.

We must always defend the ability of those with whom we disagree to publicly express that disagreement in full furtherance of their Constitutional right to do so, though this tolerance never extends to destruction or violence. As police try to do the exceptionally difficult job of respecting the former while preventing the latter during often-tense situations, it is worth remembering the underlying motivations of the radicals in green hats who see them as little more than malevolent agents of “the white supremacist, capitalist, settler colonial state.”

Distinguishable by their distinctive lime green hats, Guild observers—one of whom explained that he was there “to essentially monitor police activity because cops lie”—were reportedly detained by police at the Arizona Capitol. I assume they were detained because they were doing more than just observe; they were doing something wrong. As my late father used to tell us, “Look with your eyes, not with your hands”.

I believe I saw that incident. He lunged at the policeman he was talking to and grabbed a baton and then proceeded to fight for it.

Remember the Buffalo incident (Summer of Floyd) as the police marched by and the protestor… waiting there… moved at an officer for his baton or tazer and wound up on the ground… oh… the… horror? Sounds like the same MO.

One of the tactics is to cause the police to start whomping on you, then they film the “brutality”. Because progressivism has done its best to remove the concept of “he certainly deserved a whomping” from our jurisprudence.

A clear reflection of the disappearing academic standards in today’s law schools as they scramble for student loans by filling slots with warm bodies of any sort. The caliber of new attorneys is ridiculously low, both in college level academics (reasoning, business, accounting, composition and grammar, forensics etc) and legal acumen.

These lawyers have been around for decades. I’ve listened to them on KPFK… the LA Pacifica radio station that is LOL… Left of Lenin.

The NLG has been a Stalinist organization for the past half century, if not longer.

Downvoted, I strongly disagree, and underestimating the enemy is a great way to keep being defeated. It’s not that they’re stupid. It’s that they’re smart enough to do what works. Their ideology is in ascendancy, they get good grades and good careers from this.

Being a “principled conservative” is largely self-destruction. There are plenty of moderately powerful people who would be happy to humiliate them.

People traveled great distances at great expense (assuming $5 gas) to attend these rallies. If these travelers are true to their leftist roots, they should be sure to buy carbon offsets to negate the environmental harm caused by this activity.

Where did legal professionals find the time to walk around the street all day?

DA’s will spring them.

calling for the total abolition of police and prisons
Get rid of criminals and you can do that part.
Until then….

Nah they’re doing it. Police are stepping out of their way. They’re getting sprung from prisons. They’ll let us have police and prisons, as long as the enforcement is just against us.

If only there had been similar legal help for Chauvin and Potter, we might not be in our current situation. But there wasn’t. GoFundMe type help for Chauvin was shut down at least once, and he didn’t have an army on his side bludgeoning the legal system from multiple angles to help him. Legal help only for the left. Cops won’t do “their job” in our society because we’ve made it legally too dangerous for them.

We’re not the establishment, they (NLG and such) are.