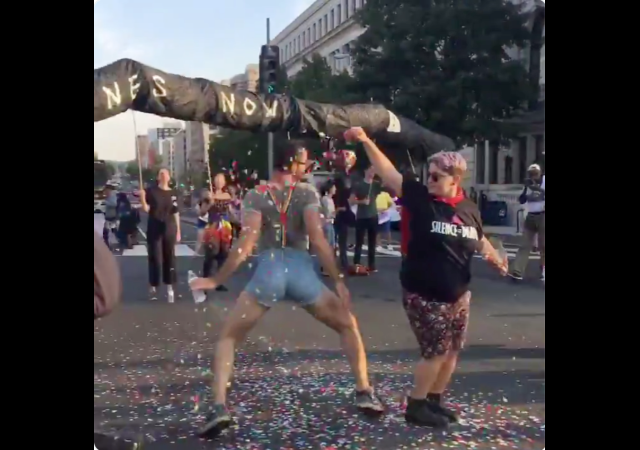 Apparently there is a group of woke activists who organize shut downs in DC. Mary wrote about one of their bizarre shutdowns that featured twerking in the street and a lot of litter. And Mike covered one of their proposed shutdowns if Biden lost the 2020 election.

They have a website devoted to organizing their various SJW flocks to turn out for shutdowns. The site covers one they held last December to “shut down the Capitol” in order to open “up space for a new kind of politics.” That obviously didn’t produce the desired results (or any results since the radical left Biden agenda thankfully remains stalled).

Now they are planning to descend on DC and disrupt the United States Supreme Court by creating a blockade that stops anyone from getting to their job in the building.  Or something.

The group “Shut Down DC” plans to “blockade the streets around the Supreme Court” on Monday, according to its website, as part of a protest that aims to “shut down” the Supreme Court as it prepares to hand down a ruling that could overturn Roe v. Wade. https://t.co/CRuZThYPnd

Want to #ShutDownSCOTUS with us on Monday but don't have an affinity group? That's ok! Meet us at Stanton Park at 6:45am. It will be hot so make sure to bring water, sunscreen, a hat, a mask, and whatever else you need.

We’re joining ShutDownDC & friends to shut down the Supreme Court on Monday, June 13 to stand up for abortion rights & women’s rights! Our democracy is in crisis and we are committed to taking action.

A left-wing group is hosting a “shut down SCOTUS” protest on June 13, with plans to “blockade” the streets surrounding the Supreme Court in light of a potential decision that could overturn Roe v. Wade being released.

The group, ShutDownDC, announced the protest on its website and states that it will begin at 7 a.m. on June 13 at Stanton Park in Washington, D.C.

As part of the “shut down SCOTUS” protest, the group will “blockade” the streets around the Supreme court, according to the website.

. . . . According to its website, the group chose June 13 since it is one of the Supreme Court’s opinion issuance days.

The protest will consist of smaller “affinity groups” of up to 20 people per group, and each group will have a “jail support liaison who can meet arrested folks” when they are released.

Must be nice to know that disrupting the work of the highest court in the land because you suspect they won’t rule as you wish will result in pretty much immediate release . . . if arrests take place at all. Many of the J6 political prisoners, by contrast, are still rotting in hellish conditions. But as we are rapidly learning, supporting radical left causes has its privileges.

Needless to say, people have thoughts about this planned disruption of SCOTUS (via Twitchy).

According to the rules this is an insurrection

Shutting down SCOTUS? Sounds like insurrection. I'll be waiting for the June 13th congressional hearings. Looking forward to people held for a year without bail. Looking for Chuck Schumer being charged. Only difference is that hopefully no unarmed protesters will be shot dead.

I suppose as long as they don't honk it's OK, right?

So I guess they’ll be thrown into solitary confinement for a year and a half for their seditious insurrectionist behavior, right? Isn’t that the standard now? Disrupt one of the three co-equal branches of government and you’re toast. I’ll be waiting with baited breath for the DOJ to crack down on these white nationalist scum.

The June 6th protesters were charged with a felony for interupting a Congressional session that already adjourned.

I would have thought that this would have applied to anyone protesting and/or “shutting down the SCOTUS” in an attempt to influence a decision. But I could be wrong.

18 U.S.C. § 1507 – Picketing or parading Whoever, with the intent of interfering with, obstructing, or impeding the administration of justice, or with the intent of influencing any judge, juror, witness, or court officer, in the discharge of his duty, pickets or parades in or near a building housing a court of the United States, or in or near a building or residence occupied or used by such judge, juror, witness, or court officer, or with such intent uses any sound-truck or similar device or resorts to any other demonstration in or near any such building or residence, shall be fined under this title or imprisoned not more than one year, or both.

Nothing in this section shall interfere with or prevent the exercise by any court of the United States of its power to punish for contempt.

I have a feeling one ☝️ f the judges changed their vote

I got a feeling that they didn’t. The Dobbs decision won’t happen tomorrow or Wednesday, though. If they clear a lot of backlog (like 20 cases) this week, it could come on Jun 21 – right after the 3 day weekend. If not, it will come later, possibly at the end of month or even after the July 4 holiday. The only certain thing is Dobbs will come down on the last decision day of the term.

If you change your decision, you invite this garbage every time.

There are diverse precedents and sects to normalize elective abortion of a nonviable process a.k.a. “baby” (planned parenthood) per chance “granny” (planned parent/hood), perhaps a virgin for social, redistributive, clinical, and fair weather causes.

If one of the Justices did NOT change their vote, keep in mind that Democrat leaders have been calling for attacks/assassinations of Justices.

And that is precisely why the Dobbs decision will come on the last decision day of the term, and the Justices will send their families on “vacation” before the decision is handed down.

One meow if you’re right. Two meows if you’re wrong. I’m leaning toward one meow myself.

The media will never call it an insurrection or act like it’s a bad thing.

I too await this DC protest with hundreds locked up for unforeseen future, years maybe awaiting hearings to be delayed time and time again.

This country is such a dumpster fire

That’s what happens when idiots put a retarded pedophile in the white house.

retarded criminal pedophile. There I fixed for you

I’d seriously love to never see that picture ever again.

The planning, coordination, bussed in crisis actors, bailbondsmen, and lawyers for this type of assymetrical assault against the court doesn’t simply run on moon beams and unicorn farts. It takes money, a lot of it.

Follow the money, and find the criminal masterminds – which are probably in the FBI.

It sounds like ‘conspiracy to commit offense’ to me. Isn’t there a federal law against that?

And if our DoJ wasn’t completely usurped by the progessives – RICO.

Instead of a shoe on the other foot comment (we all know the FBI would have arrested the leaders and forcibly shut this down if it was right wing) this should be an opportunity to remind us of the need either replace or dramatically reform the FBI with an entirely set of new personnel.

OK, who kidnapped Danny and got his LI login?

I’ve been giving Danny a lot of thumbs up lately, at least I hope it’s him.

Ya think the FBI will have to “attend” this one?

Well someone has to coordinate the protesters …

The babies must be sacrificed in a wicked solution for social, redistributive, clinical, and fair weather causes.

It will be interesting to see how many people show up tomorrow. The Dobbs decision will not happen tomorrow. I see this as a dry run. A test. The scale:
<1000 show up – small fringe, no real problem, security can handle it.
1000-10000 A minor problem, the Justices need to be concerned
10000-100000 A serious problem, the Justices had better make serious preparations for Decision Day.
100000-1000000 Oh boy. The Justices had better send their families to secluded retreats in the mountains NOW, and have helicopters gassed up and waiting to take off from the Courthouse grounds on decision day.

Interesting point as I don’t recall ever seeing more that 15-20 ‘protestors’ at the homes of the Justices they were attempting to intimidate.

But they marched millions with pink hats to protest Trump’s inauguration. It is all a question of how angry and motivated they are. Most people may not be paying attention since as yet there is no official decision. If they can get a thousand today, they can get a million after the decision is handed down – if it resembles the leaked draft.

all depends how much money is behind this. the organizations and their backers have been in place for quite a while.

The worse, the better

I’d sure like it if they shut down all of DC.
Permanently.

When laws don’t apply equally to everyone in obviously they don’t because this would be an Insurrection. We are lost

So far hear or see nothing on it, a bust?