“Castro-Huerta’s argument would require this Court to treat Indian victims as second-class citizens. We decline to do so.” 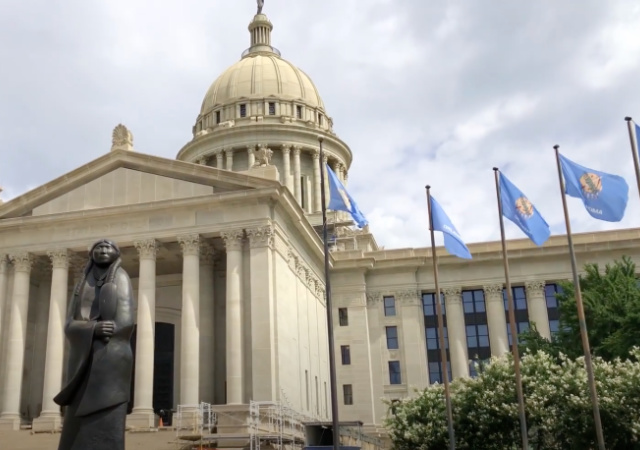 The decision somewhat rolls back the 2020 decision, McGirt vs. Oklahoma, that recognized the eastern half of the state, which includes Tulsa, as an Indian reservation. The area has about two million people and the majority are not Native Americans. It also limited the authority of state prosecutors.

Oklahoma lost “hundreds of criminal cases” due to that decision.

At the heart of the McGirt case was Jimcy McGirt, who was convicted in an Oklahoma state court of three serious sexual offenses.” McGirt claimed Oklahoma couldn’t do anything because “he is an enrolled member of the Seminole Nation and his crimes took place on the Creek Reservation.”

The case before SCOTUS was Oklahoma vs. Castro-Huerta. It is important to note that the petitioner is not a Native American:

In Oklahoma v. Castro-Huerta, the state argued federal and tribal jurisdictions lack the capacity to handle a deluge of cases now under their responsibility, and dozens of violent crimes have gone unpunished because federal statutes of limitation expired, witnesses died or evidence vanished.

The case involved Victor Manuel Castro-Huerta, a non-Indian who was sentenced to 35 years by a Tulsa state court for criminal neglect of his 5-year-old, disabled stepdaughter. A state appeals court threw out the conviction because the stepdaughter is an Indian. Citing the McGirt rule, the state court transferred the case to federal prosecutors who reached a plea bargain with Mr. Castro-Huerta: seven years in prison, followed by deportation to Mexico.

The decision is only about Castro-Huerta, not his Native American wife. Both were convicted.

SCOTUS determined all of Castro-Huerta’s arguments did align with the two federal laws he brought up: General Crimes Act and Public Law 280.

In the opinion, Justice Brett Kavanaugh states “the Constitution allows a State to exercise jurisdiction in Indian country” because “Indian country is part of the State, not separate from the State.” He points to the 10th Amendment.

However, “federal law may preempt that state jurisdiction in certain circumstances.” But mostly the “State has jurisdiction over all of its territory, including Indian territory.”

First, the exercise of state jurisdiction here would not infringe on tribal self-government. In particular, a state prosecution of a crime committed by a non-Indian against an Indian would not deprive the tribe of any of its prosecutorial authority. That is because, with exceptions not invoked here, Indian tribes lack criminal jurisdiction to prosecute crimes committed by non-Indians such as Castro-Huerta, even when non-Indians commit crimes against Indians in Indian country. See Oliphant v. Suquamish Tribe, 435 U. S. 191, 195 (1978).

Plus, “the State has a strong sovereign interest in ensuring public safety and criminal justice within its territory, and in protecting all crime victims.”

The mic drop (emphasis mine):

The Biden administration treats most of us a second-class citizens.

I think the correct classification is “basket of deplorables”.

It’s right there. I’m sorry Kavanaugh didn’t provide specifics: However, “federal law may preempt that state jurisdiction in certain circumstances.” But mostly the “State has jurisdiction over all of its territory, including Indian territory.”

Hang on. That’s not quite true. This opinion grants concurrent jurisdiction of the laws passed by the State of OK, Tribal Councils and Congress.

That is way different from what is being proposed here in this thread of comments.

That would then exclude those Military members stationed at Ft Hood but who aren’t Citizens of TX or classified as residents of TX. Civilian dependents might have an equal or lesser claim to the same thing depending on how their home State views their situation.

Simply being assigned to a military base doesn’t work as either a ‘home base’ that grants immunity from State law nor does it automatically mean State law applies.

It depends on the State residency status of the person committed the act, where the act was committed and whether the State even claims jurisdiction in some cases.

The better way to view this is marijuana. Not legal under federal law. Legal or at least decriminalized in some States. TX claims jurisdiction over a TX resident who traveled to a State where recreational marijuana is legal.

TX considers only whether the act was a criminal act under TX law committed by a TX Citizen or resident over whom they have jurisdiction. Do they always assert the jurisdiction? No obviously not. Is their contention even legal / constitutional? Maybe

Ok. Thanks. The question posed by Jack in silver springs relating to abortion and the ruling in Castro was:

‘Do the State’s restrictions extend to Federal land within the State?’

Your original answer seemed to be yes. I appreciate your clarification. Thanks.

I agree, it’s past time to stop treating Indians and second class citizens. Lets get rid of the distinction between them and every other american. Dissolve the paternalistic agencies lording over the reservations, divide the land between the residents, and let them have local county and municipal elections. The ‘nations’ can remain as cultural organizations, but should no longer have a legal distinction.

I don’t think that will ever happen. In fact, I don’t know why the Indians don’t use the casinos to buy up land and add land. I know that land wouldn’t be “reservation “, but if there is a group that’s want to live more “pure”, hunt, fish, whatever but still have access to say modern medical, I say go for it

Don’t know about OK, but in NY, the various tribal nations do own decent chunks of land off the official reservations.

Two percent want to hunt and fish and 98% want to do whatever.

Native-run casinos wouldn’t be nearly as profitable without the wonky semi-sovereign status that exempts them from several state taxes. Native-run smoke shops are another, smaller-scale example.

Our tribal laws create three classes of citizens – (1) tribal leaders, who have unchecked authority over (2) tribal members, and (3) non-tribal citizens who subsidize the tyranny of the tribal leaders.

I’ll drink some firewater to that,

I remember I was actually living in Oklahoma at the time and this was a big deal.

Literally everybody there thought the decision was utterly INSANE, because it effectively declared Indian reservations their own territory.

But that was exactly what the white man promised when he set them up.

Somehow, Gorsuch the “originalist” convinced himself that this statue should be completely rewritten by judicial fiat.

Found this, about Indians buying back their land

This is too twisty for me to follow, but it smells bad to me.

One decision says the fedguv should have authority because the Indian courts are doing a crap job. “We’re from not your government and were here to ‘help you.'” Mexican courts do a crap job, can we do them, too?

Another says “We’re not horning in because the defendant is one of ours.” Like Julian Assange? Edward Snowden?

These justifications smell to me like the Jojo Krako codicil to the Federation’s Prime Directive: “Who’s interferin’? We’re takin’ over!”

The original insane decision declared that NEITHER state NOR federal governments could prosecute ANY crime that took place on Indian land, EVEN IF the victim or perpetrator were not Indians.

Aren’t they? Reservations appear to, for example, be able to declare themselves no-carry zones even though state law says otherwise.

I know I have this “Hollywood “ vision of American Indians, yet I do realize that the reservations are made up of 50-70% alcoholics, large percent broken families, tons of crime.

Just think of the lemmings during Covid and how many STILL are wearing masks and standing 6 feet behind you wherever you shop.
Still got the plastic walls up too
It’s no wonder
Maybe real leaders from
Tribes can come together and begin the healing

“I do realize that the reservations are made up of 50-70% alcoholics, large percent broken families, tons of crime.”

Compare and contrast to Russians 1960-1980. And for much the same reasons. Their incomes and services were nearly 100% controlled by Big Socialist Daddy Sam.

Non-native as in alien or non-citizen. Native constructs (“=”) as in indigenous past. Native as in civil jurisdiction, natural-born citizens.

You are a native. Here is the distinction I make: people who are descendants of those people residing in North America before Columbus are pre-Columbian indigenous native Americans; people who are descendants of those who settled in North America after Columbus arrived are post-Columbian indigenous native Americans.

Was curious about 5-4 decision and dissent….not much analysis on-line yet but from short “clips” Gorsuch dissent seems more Constitutionally “strict”.

Thank God, this was needed! McGirt really created havoc for our legal system here! Now that that has been cleared up Oklahoma has a chance at reestablishing some order in it’s court system.

The McGirt Opinion needs to be overturned and thrown in the garbage.

Sadly, this new case failed to do that. This is not a victory. This is SCOTUS trying to find a workable “solution” to make their previous error somewhat workable in practice.

The entire eastern half of Oklahoma was never, is not, and never will be an Indian Reservation.

The federal statute that the majority (which, sadly, included Gorsuch) in McGirt completely ignored explicitly stated so in terms that no one could possibly misunderstand.

One other thing: “Native American land.” – Indian Reservations are on FEDERAL land. The Indians don’t actually own it. Never did. They are all on land owned entirely by the Federal Government.

One more thing: Indians are not “native” to this continent any more than they are “Indians”. Columbus called them Indians because he didn’t know where he was. The people living here when he arrived were migrants that had very recently, in terms of human history, migrated from Asia. Homo Sapiens are not indigenous anywhere in the Western Hemisphere. “Native American” is an even more absurd term, since “America” got its name because a cartographer, Waldseemuller, wanted to recognize that Italian explorer Amerigo Vespucci was the first to recognize that what he was exploring was actually a previously unknown Continent, and not merely some lands and islands off the coast of China or India.

It is time to abolish tribal sovereignty. It is not helping the Indians anymore.