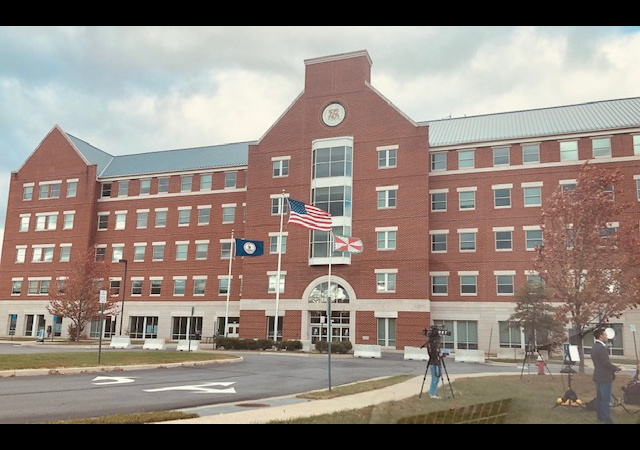 A group of parents has launched a lawsuit against Loudoun County schools in Virginia which makes a variety of charges. They are represented by America First Legal, headed by former Trump adviser Stephen Miller.

Several months ago, former FOX News host Megyn Kelly, a lawyer herself, said that the way to fight the woke agenda in education is in the courts, and that’s just what’s happening.

It seems appropriate that this is happening in Loudoun County, which has been ground zero for many of these issues.

Today, America First Legal (“AFL”), in an action through its Center for Legal Equality and with the assistance of the Binnall Law Group, sued Loudoun County Public Schools (“LCPS”), Superintendent Scott Ziegler, several senior LCPS officials, and the Loudoun County Public School Board on behalf of eleven courageous parents for the district’s deliberate, egregious and systemic violation of parents’ rights.

Unlawful actions by the most notorious school district in America include:

Read the full text of the suit here.

The conservative America First Legal (AFL), through its Center for Legal Equality, has filed a lawsuit against Loudoun County Public Schools (LCPS) “for the district’s systemic and egregious moral corruption of children and its deliberate, and almost gleeful, violations of parental rights to control the upbringing of their children.”

“Parents across the country should be shocked and horrified to see a once-respected school system systematically destroyed, all because LCPS believes that it has more of a right than parents to tell a captive audience of students what they MUST believe,” America First Legal said in a press release Tuesday. “Fortunately, as we have seen, there are no parents with more courage, more fight, and more rock-solid dedication to their children than in Loudoun County, Virginia.”

We constantly hear stories about college students issuing lists of demands. It’s about time parents, i.e., taxpayers, started making some demands of their own:

The plaintiffs listed several demands from the school district.

“A declaration from the court that Policy and Regulation 8040, and other policies and practices violate plaintiff parents’ constitutional rights; an injunction against LCPS to prevent it from continuing to do so; the appointment of a special master to monitor LCPS and report to the court on its compliance with its legal obligations; an order directing LCPS to pay for plaintiffs’ children’s education in a private school until LCPS ceases its unlawful activities,” AFL wrote.

This is the way to fight this. Woke school boards have to learn that parents will fight back.

It would also be appropriate to have good people run in the next board election, support them, and have them win. Take control of the board and “settle” with the plaintiffs of this suit, much the way the progressives do when they sue a compliant government agency.

This would have been a better lead in today…

Yesterday, a man named Hershel “Woody” Williams passed away at the age of 98. Some of you may recognize his name while, sadly, far too many in this country do not.
The President of the United States in the name of The Congress takes pleasure in presenting the MEDAL OF HONOR to CORPORAL HERSHEL W. WILLIAMS UNITED STATES MARINE CORPS RESERVE for service as set forth in the following CITATION:
For conspicuous gallantry and intrepidity at the risk of his life above and beyond the call of duty as Demolition Sergeant serving with the First Battalion, Twenty-First Marines, Third Marine Division, in action against enemy Japanese forces on Iwo Jima, Volcano Island, 23 February 1945. Quick to volunteer his services when our tanks were maneuvering vainly to open a lane for the infantry through the network of reinforced concrete pillboxes, buried mines and black, volcanic sands, Corporal Williams daringly went forward alone to attempt the reduction of devastating machine-gun fire from the unyielding positions. Covered only by four riflemen, he fought desperately for four hours under terrific enemy small-arms fire and repeatedly returned to his own lines to prepare demolition charges and obtain serviced flame throwers, struggling back, frequently to the rear of hostile emplacements, to wipe out one position after another. On one occasion he daringly mounted a pillbox to insert the nozzle of his flame thrower through the air vent, kill the occupants and silence the gun; on another he grimly charged enemy riflemen who attempted to stop him with bayonets and destroyed them with a burst of flame from his weapon. His unyielding determination and extraordinary heroism in the face of ruthless enemy resistance were directly instrumental in neutralizing one of the most fanatically defended Japanese strong points encountered by his regiment and aided in enabling his company to reach its’ [sic] objective. Corporal Williams’ aggressive fighting spirit and valiant devotion to duty throughout this fiercely contested action sustain and enhance the highest traditions of the United States Naval Service

No one has more legal standing to fight this in court than the parents. Rallying everyone else to support them should be easy.

Until individual members of school boards are held legally accountable, then they will fight long and hard using tax payers $$. I think the standard should be that “individuals” have personal “immunity” up to the point where it’s proven to a civil suit standard of certainty that they purposely violated policies and or laws. If so, then they are on their own for legal expenses and penalties. That would seem to be a good policy to combat “the woke”.

I hope they win $$$$$$$$ with the condition all of the administration and teachers be replaced to stop any stealth attempt to restart the indoctrination.

Sec 1983 violations aren’t limited to LEO. The populist right must use the lawfare tactics of the progressive in the CT system. Particularly so where an election or series of elections, due to staggered terms, won’t provide an opportunity for a reform minded majority to be created.

Policy change isn’t limited to the electoral domain. The progressive left routinely exploits the legal domain to affect change; sue and settle being a prominent example. We either embrace this fact and create our own law fare network to oppose the left or we will continue to cede the legal domain to the left.

Virginia Republicans just had an electoral sweep of governor, lieutenant governor and attorney general. The governor ran on reform of this hot button issue of abuse of school children. Where is the Virginia DOJ and criminal prosecution of such blatant sexual abuse of students and parental civil rights?

Why is it up to a coop of parents to bring expensive civil suits? Is this not criminal abuse of children and infringement upon civil rights?

Let one black man be turned away from the polls, or one gayboi who wants to use the girls bathroom be denied,and the entire weight of the civil rights division will crush the alleged perpetrator of such abuse.

These are CRIMES against children. Where is the Virginia DOJ and criminal prosecution of such blatant sexual abuse of students and parental civil rights?

Both can happen. They can sue for past grievances while the legislative and executive branches can prevent future ones.

The dark humor of this situation is that without reading well past this headline, it would be impossible to infer which side’s complaint this actually was.

We ended up tutoring our sons in all classes and teaching them in areas that LCPS did not teach in. Me and my wife both have gone to college , I am an Electrical Engineer, and my wife’s background is Finance and English.

Your wife should have proof read this for you if she has a degree in English and explained the use of “Me and my wife” vs “My wife and I”. The same with your first “Me and my family”

His electrical engineering ability is a lot more impressive than your skill in grammar checking.

They’ll still be hiring ed school graduates who will subvert the parent’s will as much as possible.

“Knowingly, systematically, and willfully violating the Plaintiffs’ fundamental constitutional rights to care for, nurture, and direct the education, moral instruction, and upbringing of their children;”

Someone help me out. Where is this spelled out in the Constitution?

I’m also disappointed that they’re rallying against ‘woke’ and things that are ‘invidious’.

It’s a press release disguised as a lawsuit which makes it harder to support. Focus on the real damage that’s been caused, and use the proper terms to describe it and why it’s unlawful.

Virginia Code 1-240.1
A parent has the fundamental right to make decisions concerning the upbringing, education and care of the parent’s child.

Couple that with basic black letter constitutional rights in the US and Virginia Constitution and the problem is easy to see. Particularly prohibitions on govt infringement of freedom of conscience and expression.

Example: school dictates use of a persons ‘preferred pronouns’. Unconstitutional because no govt entity may compel speech.

Example: school conceals from parents any issues of medical or psychological care. Illegal because the parents have the right to determine those issues, select the practitioner of their choice who follows the philosophy of care of the parents. (limited exception for actual harm by parents but that would entail a referral to the child welfare office for investigation, the school can’t substitute it’s preference in place of a parent)

I think your reply was for diver64 rather than myself.

I’m not sure whether diver64 was challenging the legal protection, the wording or just being awkward. I’m merely expressing frustration with lawyers using hyperbole instead of calmly drawing attention to the actual law.

As a Constitutional matter the plaintiffs are correct. The State can’t interposed itself to block, overrule or substitute it’s preference for any aspect of the Parents right to determine how the child is raised. (Narrow exceptions).

I do take the point that the plaintiffs could have been more precise and specifically enumerated all the ways the actions of the State violate multiple Constitutional strictures.

On the other hand the actions of the State here are so offensive as to be prima facie Constitutional violations. IMO there isn’t a great need to list the multiple ways; a broad filing is fine. The trial CT will flesh out the remainder via motions, discovery, testimony, briefs, pleadings and argument at trial.