Victim Edgar Diaz Garcia: “It’s scary. It also makes you mad. You need to work, so they can enjoy.” 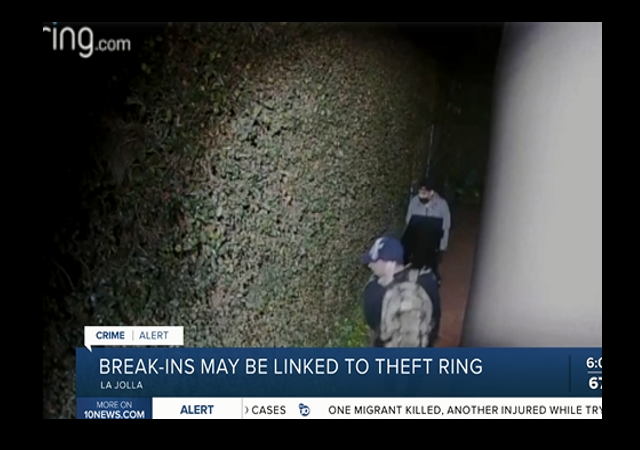 The California crime wave continues unabated. The main difference between this wave and previous ones is gangs are specifically targeting high-end homes and the wealthy.

Recently, the San Diego area high-end neighborhood of La Jolla was struck by an organized theft ring. The brazen thieves were caught on camera hauling away a safe.

Around 9:30 p.m. Friday, Edgar Diaz Garza got a Ring camera alert on his phone while he was out of town.

Video shows three men, two of them carrying a large safe out of his home off Via Capri. One of the thieves is seen smacking the camera on his way out.

“It’s a terrible feeling because you see them taking your stuff,” said Diaz Garza.

Diaz Garza says the men scaled a neighbor’s fence and his fence, then broke windows, before smashing a bathroom window and targeting the safe in a bedroom closet.

“It’s scary. It also makes you mad. You need to work, so they can enjoy,” said Diaz Garza.

Inside the safe was a cache of jewelry and watches, full of sentimental value.

In April, I noted that South American gangs were heading to California for a spot of tourism….crime tourism.

They have been busy, though two Chilean nations were caught and have recently pleaded guilty for robberies in Ventura County.

Esperanza Venejas, 25, and Hugo Perez Martinez, 26, pleaded guilty to the charges that stemmed from an April arrest in Thousand Oaks.

The two Chileans were arrested on April 15, after deputies from the Ventura County Sheriff’s Office responded to a report of a vehicle break-in at the Oaks shopping mall. When deputies arrived on scene, four people, including both Venejas and Martinez, fled the area on foot.

Deputies were able to track down Venejas who was with an unidentified juvenile. Meanwhile, Martinez went back to the vehicle and drove off. He was eventually located and arrested as well.

A bag filled with about $2,500 worth of stolen merchandise from a Macy’s department store was recovered at the scene, the DA’s office said.

One Ventura County homeowner managed to nab another Chilean national as he was allegedly robbing the house.

Alexis Provoste Aranguiz, 43, of Chile, was arrested Friday after a harrowing encounter with the owner of an Oak Park home, according to Ventura County Dist. Atty. Erik Nasarenko.

The incident unfolded around 6:30 p.m. when the owner returned home and spotted an SUV idling in front of his residence. The owner entered the house and encountered a burglar, whom he struck, Nasarenko said. That burglar fled outside and into the waiting vehicle.

The homeowner then encountered a second burglar — later identified as Aranguiz — and detained him until Ventura County sheriff’s deputies arrived.

“There was a physical confrontation and the homeowner basically held down the suspect until the police showed up,” said Capt. Cameron Henderson of the Ventura County Sheriff’s Office.

Welcome to the Golden State, where politicians focus on inanities as our formerly safe cities are the destination of choice for crime tourists!

Excellent. I hope they escalate to home invasion and kidnapping.

The rich, white, Democrat/Socialist neighborhoods are where the money is and where the highest crime rates deserve to be. They’re the ones driving the policies that encourage this to happen, they should pay the biggest price.

Ain’t it a shame to see people get exactly what they voted for?

Probably in California the government authorities will be more upset if these criminals are unvaccinated instead of breaking the law like burglary.

Even more upset if the property owner defends their home, family, and belongings.

I don’t understand the down votes for mbecker908’s comment. It’s our wealthy elitists who are discouraging the best crime deterrent–a well-armed public.

I suspect they live in a high-end suburb of LA and don’t have a plan for home invasions.

Or their ignorant fools. Or both.

I didn’t vote for this shit. But I’m not leaving. I won’t get chased out by these damn fucking lunatics. Sorry to vent, but this is just inconceivable!

And don’t quote me that line from the Spaniard in Princess Bride. 😉

I’m having a hard time feeling any sympathy

Good. The rich liberal jackasses thought they would be immune to the fallout from their insanity.

Dumbasses don’t understand that criminals go where the money is.

Well, that is where all the goodies are. These rich people will want all this stopped of course but not by Any elected Republican. No way. Can’t have the wrong people doing the right thing.

Working for LAPD, I am privy to reports that would blow your mind which never make the news. It’s getting really bad out there.

Is the LAPD doing anything?

Would you, knowing that the full weight of the political class would come down on you for harassing the politicians’ true constituents? Myself, as a retired Peace Officer, am amazed that there is anyone still working there at all, except those so close to retirement that they can taste it.

You should give us a few examples.

If you have a home safe you really do have to secure it to the house frame.

Very true. I often see reports where they steal the safe. They open it at their leisure later.

We had an organized group of Chilean burglars here in L.A. a few months ago.

There’s a popular trail in the Santa Monica Mountains near the beach in the Palisades my wife and I often hike. Just off of Sunset. I see reports for car break-ins every week from that site. My wife and I never park there. They finally staked it out and caught a couple guys. When I said to the officer, “Finally!”, she said, “Oh, they’ve already been released.” They were released before the arrest reports could be processed! Insane. And the car break-ins are still going on there.

At least they can be assured that Biden will be “on it”.

They wrote to say they appreciate the discount baby formula rainchecks, but it’s not what they had in mind.

“There was a physical confrontation and the homeowner basically held down the suspect until the police showed up,”

I’m shocked that the homeowner hasn’t been charged with assault yet.

I still keep track online of my old neighborhood in San Jose. Not wealthy by California standards – houses only start at 1.4 million. So sad to read of new move-ins paying such high prices only having to secure their houses like fortresses against all of the crime. Calls to the police do not help. Over and over I read of police being no-shows to a crime. At least they came when my 82 year old former neighbor was beaten to death by a vagrant. He was out for his evening walk.

It used to be such a safe place to live.

How the hell do people afford housing at that price?

“At least they came when my 82 year old former neighbor was beaten to death by a vagrant.”
My guess is that their arrival did not help your former neighbor.

Police show up to write after-action reports. They have no duty or requirement to defend you. When it comes to the defense of your property, they will stand by and watch it burn, see the summer riots.

We live in metro Phoenix and a number of years ago somebody tried to kick in our front door. My wife called 911 after she got my 45. She did exactly as we had gamed, stood away from the door behind a piece of furniture, steadied herself on the wall, and pointed the gun at the spot on the door. Had the phone on speaker talking to the 911 operator.

We lived in an upper-middle-class area about 10 minutes from a police station and in a mixed-use area residential/commercial. The cops took 45 minutes to show up and didn’t believe the story my wife told. Fortunately, she still had the 911 operator on the phone. The guy left after about 20 minutes of pounding but my wife kept the 911 operator on the phone and didn’t put the gun down.

Cops did a neighborhood search and found the guy. Turns out he was the brother of a distant neighbor, was drunk, and had the wrong house. A near-fatal mistake for him.

Moral of the story, if you’re depending on the police to keep you safe, you’re naive at best, really stupid at worst. They won’t be there.

Pouring over the border for those streets paved in gold

Foreign invaders stealing American gold. Has a kinda Conquistador ring to it.

Southern California seems destined to be returned to the Mexicans in its original, desert form.

People respond to both incentives and disincentives. They make rational choices based on a basic risk to reward ratio. Raise the bar for felony theft from $500 to $1,000 and then essentially rule out prosecution of misdemeanors and you get lots more theft.

All but refuse to prosecute property crimes like loitering, trespass and B/E and you get more property crimes. Develop a culture of disrespect, harassment and disdain towards LEO to the point they must fear for their future with every encounter and LEO will initiate fewer encounters, they become reactive. All these work to create a climate which encourages lawlessness.

What’s the brand of popcorn they serve at the Oscars?

dangerous times in ca and likely to get much worse

The funny thing is that California has an excellent stand your ground and Castle doctrine law.
And while they are pretty anti-gun, you can still buy a Glock, Sig,. Ruger or even a Revolver.
So once the criminals use force to enter your home, even in California you are legally justified in blasting away even if they do not have a gun