One of the Largest Migrant Caravans Ever Walking to the U.S. Border With Demands for Entry

One of the Largest Migrant Caravans Ever Walking to the U.S. Border With Demands for Entry

One of the migrants informed FOX News that President Joe Biden “promised the Haitian community he will help them.” 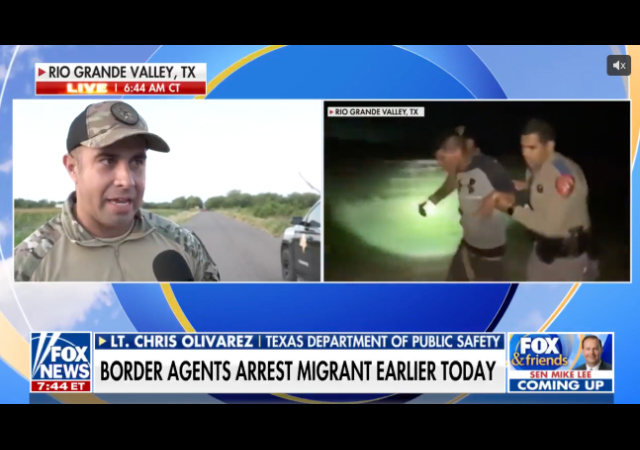 A migrant caravan with almost 10,000 people left the Guatemala-Mexico border on Monday morning. Officials believe it could have 15,000 migrants by the time it reaches the southern border.

Luis Villagran, the organizer, told Fox News: “We consider we are around 9,500, it measures 51/2 km from the start to the end, people keep on joining, in the first police check there were approx 100-150 national guard, INM, state police and let us through freely.”

The migrants come from Cuba, Nicaragua, and Venezuela:

“Let’s go to the video of that caravan you were just talking about. The organizer Luis Villagran tells me there are at least 9,500 and they stretch more than five kilometers long in the caravan right now. It’s made up largely of Venezuelans, Cubans, Honduras, Guatemala, El Salvador, even some, he says, from Somalia. And if they indeed make their way to the U.S. border — and they got a long way to go some 4,000 miles — it will be the largest one to have ever gotten there. Meanwhile this sector already has many migrants coming across river than they can handle. Take a look at this video of an arrest we made it about 5:00 A.M. Texas DPS agents chasing those that don’t want to be apprehended. The ones we worry could be gotaways if they are not apprehended. But obviously Lieutenant Chris Olivarez was able to get this individual you see on camera.”

It also has Haitians. One of the migrants informed FOX News that President Joe Biden “promised the Haitian community he will help them.”

In other words, Biden has to allow the migrants to enter America.

“He will recall Title 42,” the migrant continued. “He will help us have real asylum.”

Title 42 put restrictions on migration during the COVID pandemic as a way to stop the virus from spreading.

Biden wants to recall Title 42 but 24 states filed a lawsuit. A Louisiana judge allowed Title 42 to remain until the dispute is resolved.

Demands? What are they? Studies major college students?

Thank the GOPe, RINO’s, Never Trumpers for all of this.

In reality, this is NOT in any way Brandon’s fault. The left has NEVER made any secret about their plans to destroy this country so its hard to fault them for doing exactly what they have always said they were going to do. ( especially since they were ELECTED).

Stealing the election and installing Brandon is also not their fault. They didn’t do it alone. ( and couldn’t have)

Thank those who in the spirit of Judas/Brutus/Benedict stabbed and thwarted President Trump in every way to hobble everything he tried to do in office.

Thank the trojan leftists/RINO’s/GOPe who colluded/protected/enabled the steal that installed both Brandon and the Senate.

When you look at it objectively, its hard to be mad at the illegals because not only were they INVITED but they were in fact PROMISED these things.

We need to make sure our anger ( and votes) go toward those who CREATED and ENABLED this- not those taking advantage of it.

No, I’m angry at the illegal aliens. They follow American news obviously. They know damn good and well Americans oppose this, and that our RULERS – face it, that’s what they’ve become – are doing this OVER our OBJECTIONS.

Shoot ’em at the border, I say. Since the establishment won’t pay for a fence for America but will for every other country on earth. We have as much right to protect our own country as Ukraine, north korea, etc.

In that sense I’m angry as you are ( for the same reasons) but reality is this….

These people come from countries that truly are a living hell (Been to a few of them and even back then they were bad- not they are much worse) so their “concern’ for our feelings is vastly outweighed by their inborn survival instinct.

That gives them no “justification” at all ( depending on which specific definition of justice you use) for coming here but it does make one understand why they are.

We need to first “protect” us against “US” ( the left and the GOPe and the RINO)- if we fail there, the rest wont matter.

Another thing: they are stealing $$ from Americans and they know it, the illegal aliens know it.

They are STEALING it. Some claim the Mexicans and central Americans are Christian. Well, there is a commandmant, Thou Shalt Not Steal. Another is, thou shalt not covet thou neighbor’s… whatever the last word was.

All these illegal aliens, and the legal ones for that matter, they are ALL ABOUT coveting and stealing. In spades.

I agree 100% with everything you say but it means nothing and changes nothing I just said above.

“Thou shalt not covet thy neighbor’s goods.” Is the 10th commandment.

Let’s not forget to thank the useful idiots who voted for Brandon et al (and the people who didn’t bother to vote. Also the bureaucrats whose jobs are to deal with these “refugees” (thanks for the reminder, CommoChief).

We may have to agree to disagree on this one.

There’s plenty of blame for both the politicians and the illegal aliens.

When they get to the border, it will part just like the Red Sea and they will walk across on dry ground as they enter the Land of Free Milk, Honey and Baby Formula.

Are they walking? Or, after the demonstration is over and the cameras are put away, will they be bussed to within a mile or so of the Rio Grande and then start the charade all over again?

Investigate the people who organize and finance this. Takes some coin to travel 2,000 miles through Mexico — food, shelter, bribes to the police officers and politicians (and don’t tell me that bribes aren’t being paid), various ‘fees’, and so on.

From where does the money come?

From Steve>>>: From where does the money come?

I’ll tell you exactly. I doubt it has changed since my days in JTF-6 back in the 90’s. Well known even then ( just not on this scale)

Granted its laundered through thousands of places but it comes from the Cartels, The Chinese, The Russians and by now probably some terrorist organizations too.

The DNC/Soros is not paying for the money to get them here ( they themselves are the ones being paid to allow it).

This is much bigger than our national politics.

Lock down the border to all traffic except trucks shipping known goods for normal establishment companies. Tell Mexico it needs to stop these invaders and disperse them back before borders can resume operations. The invaders stay in Mexico as in President Trump’s policies.

Turn around now. You won’t have to walk back so far.

Turn around? Are you kidding? They’ll be drinking our children’s baby formula by the end of the month.

Then come July it will be time for Biden to restock and our store shelves will be empty again.

You just got to love the “new illegals “

Don’t you know that ALL those who have contributed nothing to this country are entitled to demand anything and everything they want?

CanI lay a wager Sundowner and his Puppeteers will welcome them with open arms and a free ticket anywhere they want to go as long as it’s a Conservative area?

That S.O.B. will never agree to the MASS DEPORTATIONS we’re hungering for.

FUND 1,000,000 Enforcement and Removal Operations (ERO) agents to remove 40 million of them from the interior. Could do it in a year, easy.

As am I but Trump has to face the reality of the situation and work within that framework regardless of any “perfect world” solution we may want.

The turtle has a serious contender (Scott) for his position and hopefully will lose.

McCarthy really doesn’t have one at the moment and does have a good bit of political clout.

The last thing Trump should do is isolate himself as an island- he has to make some compromises whether we like them or not.

Even though I personally loathe and despise his endorsement of McCarthy, I can see why he has to at the moment.

It’s an opportunity for the Biden admin to embrace this as their Sister Souljah moment before the midterms and demonstrate resolve…but they won’t. Instead they will cower and collapse before the immigration lobby and the vested interests served by them; big AG, grievance grifters, Catholic Charities and other NGOs who get federal funding to receive, feed, house and assist these folks on our dime and certainly not least the vast bureaucracy that hands out the taxpayer dollars.

The “Biden administration” isn’t cowering and collapsing to anyone. They LOVE this!!! This is what they want! Hate Americans? No problem!! We’ll just import a NEW PEOPLE that WILLL LOVE US & VOTE FOR US!!!

They may be in favor of unlimited immigration but I assure you they are not in favor of the electoral consequences of that policy. They will do everything possible to deflect and dodge responsibility.

If they try to cross, shoot them. All. Leave the bodies for the vultures. If the news media goes in to chive it shot them too.

Film it. I hate typing on the phone.

“Biden wants to recall Title 42 but 24 states filed a lawsuit. A Louisiana judge allowed Title 42 to remain until the dispute is resolved.”

I mean no disrespect, professor, but we have moved far beyond the point where this has any meaning. Biden, Title 42, lawsuits, and Louisiana judges are to immigrants and the border what Fauci, masks, executive orders, public health bureaucrats were to the COVID virus. These people are Nancy Pelosi and Lori Lightfoot at the hairdresser, Gavin Newsom and Gretchen Whitmer dining out. It is too late, we have an immigration pandemic, 9,500 more will be a rounding error.

The “Dispute.” An apt term for what the next two generations of life in this country are going to be. Regardless of outcome, the country will have been changed forever . . . not for the better one suspects. It will be an ironic tragedy and twist of fate that in histories the name Joseph Biden, an otherwise inconsequential, lifelong bureaucrat and small, little figurehead of a man (with hair plugs) will be forever have his name associated with the onset of the period of Dispute in the country.

There’s some speculation that Drooling Joe managed to hack off the Mexican president, Obrador, something fierce. And that’s why he’s letting this caravan through.

So we have a name. Why isn’t Luis Villagran, the organizer of this caravan, charged with human trafficking and facing an extradition request?

Everyone knows that if these migrants get into the USA and stay, they will be an exploited class at the bottom of the economic totem pole. What also of some of the young who are brought here illegally who are trafficked?

There are a couple of very easy ways to stop this. Especially when we know what organizations’ are organizing these little parades.