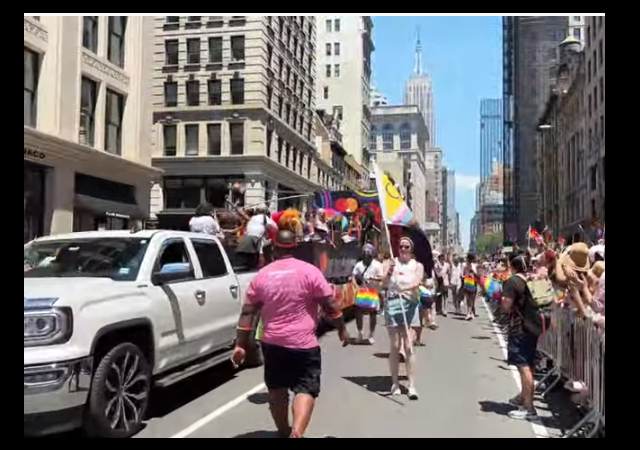 New York City is touting the fact it has opened the nation’s first clinic offering the monkeypox vaccine.

The demand from the gay community was so great that the clinic was overwhelmed by demand just ahead of the NYC Gay Pride Parade.

New York City officials have come under fire for a botched rollout of moneypox [sic] vaccines for at-risk gay and bisexual men just two days before Pride — amid fears festivities for the annual event will trigger a surge in cases.

Thirty cases of the rash-causing virus have already been been detected in the Big Apple, with almost all among men who have sex with men.

In an attempt to stem cases, the city’s Department of Health began rolling out vaccines at a walk-in center for gay or bisexual men who had multiple sexual partners over the last two weeks.

But after a line more than 100 men-long formed within hours, the city was forced to suspend the offer.

Critics say the jab should have been rolled out sooner, as even the lucky few who did receive a shot Thursday will not be fully protected from monkeypox for at least two weeks — too late for this weekend’s festivities.

The clinic is trying to control crowds by making those wanting vaccinations make appointments.

Demand for the vaccine was so high that the city had to restrict vaccinations to those with appointments. The city had 1,000 doses of the Jynneos vaccine, but is working with the U.S. Centers for Disease Control and Prevention to get more doses, CBS News said.

“The demand we’re seeing today is further proof of how proactive the LGBTQ+ community — and all New Yorkers — are when it comes to their health and seeking healthcare,” New York City Health Commissioner Dr. Ashwin Vasan said in a statement Thursday.

“New York City is among the first in the nation to offer monkeypox vaccinations and, as of this afternoon, all available appointments are booked through Monday,” Vasan said. “We hope to make more appointments available soon. We are in talks with the CDC to obtain more doses and are looking into how we can boost our capacity citywide.”

I will also note that there were pride parades all across the country this weekend.

The annual marches in New York, San Francisco, Chicago and elsewhere took place just two days after one conservative justice on the Supreme Court signaled, in a ruling on abortion, that the court should reconsider the right to same-sex marriage recognized in 2015.

“We’re here to make a statement,” said 31-year-old Mercedes Sharpe, who traveled to Manhattan from Massachusetts. “I think it’s about making a point, rather than all the other years like how we normally celebrate it. This one’s really gonna stand out. I think a lot of angry people, not even just women, angry men, angry women.”

Thousands of people — many decked in pride colors — lined the parade route through Manhattan, cheering as floats and marchers passed by. Organizers announced this weekend that a Planned Parenthood contingent would be at the front of the parade.

I predict that in addition to indulging in leftist hysteria over the Supreme Court’s reversal of Roe V. Wade, some participants in these parades are likely to indulge in behaviors that will lead to a spike in American monkeypox cases.

The incubation period for monkeypox is 1-2 weeks. I will look at the case numbers in 14 days and see if my projection holds. If it does, expect another round of pandemic hysteria from our press.

The ones I’ve seen seem at least reasonably happy…

Until some kook tries to boink ’em.

This is serious. I’m not taking any chances. I’m having my monkey vaccinated today.

Known Patient Zero for both human-comparable Aids and monkey pox were gay men who had visited Africa. Where monkeys are known to harbor both maladies and spread it via exchange of bodily fluids.

It’s quite likely that both maladies jumped species because gay men put their special purpose where common sense says it doesn’t belong.

“Awright, spread out! We’ll decide who does the 50 best monkey impressions, give them the shots we got, and the rest of yuz go home. Begin!”

I remember way back in the beginning of AIDS when the gay community was pushing safe sex. I think a condom is supposed to be protection against monkey pox as well as AIDS.

Sure are. And yet — it isn’t happening. Almost as curious as the lack of male mommies.

Leslie will have to wash her hands vigorously if she reads this comment section.

Who needs condoms when there are vaccines and anti-viral meds? Of course, AIDS is forever but so are the boosters for everyone else. Handy ploy to keep people under thumb.

I don’t blame the clinic or the city here. They have x amount of vaccine and if demand exceeds supply well then maybe you don’t have gay sex that weekend? Times sure are tough.

Yeah no problems with that. What I question is where is the 24/7 condemnation for risky behavior within the current context of monkey pox v that of Rona?

Sure, it’s pride month and time for parades but considering what happened already with a large festival and subsequent international spread perhaps a much stronger set of warnings is in order from the public health community. They don’t have to full Karen just 1/4 Karen.

Planned Parenthood at the pride rally…are they going for obvious irony?

Gay parenthood is pretty much the definition of planned.

The trans/homosexual intrinsic exclusion is not planned as in planned parenthood a.k.a. elective abortion the wicked solution, but “our Posterity” is less diverse (i.e. quantity). That said, beware back… black holes… whores h/t NAACP.

The trans/homosexual intrinsic exclusion… but “our Posterity” is less diverse (i.e. quantity) for its choice.

I love that we have a Karen scale and its fractional. Bonus points given when there’s math.

Even if they were the lucky ones who got the shot they are still not protected for two weeks. Then on the one hand they will act as if they are protected, and still get the monkey pox. And on the other hand monkey pox is non dangerous to most. So the final effect is a statistical bump in case numbers that will be used to push the vaccine on the whole population.

“Critics say the jab should have been rolled out sooner”.

Or maybe just exercise some self-control if you’re that concerned about it.

In this case perhaps the “jab” shouldn’t be done at all?

Better give them a big dose of penicillin while they’re at it.

Frequent unprotected sex with many anonymous partners has consequences.

What vengeful spiteful hateful and cruel God would create such a world?

Bosco, the male jack who visits our ranch fence weekly to check on his little girl, says, “Whut?”

To be fair, that’s like holding an NRA convention and asking people to leave their guns home.

Progress, positive, per chance pride? Democrats denied the primary cohort at risk from AIDS. Aside from planned parent/hood in several Democrat districts, they denied the same principal cohort at risk from Covid-19/20/21/22. NOW (pun intended), they care about their socially liberal trans/homosexual male constituency?

OK, seriously. This is a hardcore Leftist constituency who by their own behavior are risking a venereal disease because of their inability and unwillingness to restrain themselves. Add it that they are in the middle of anti-American territory. And we are supposed to be concerned.

When you engage in conduct that runs the risk of contracting such a disease, aside from basic human compassion, for someone who has contracted the same , you deserve to be questioned at least as to your sense of responsibility as an adult in engaging in such lack of restraint.

They’ve got gays lining up to be medically experimented on. Wow.

Must be that new Pfizer slogan: Stroke with pride,

Lotto tickets to win the Brooklyn Bridge, magic beans, and mugs of stone soup will be offered as well.

To be fair, this affects all people… persons with a socially liberal lifestyle and penetrate back… black holes… whores h/t NAACP.

Transgender spectrum (“LGBTQ”) with an irregular gay (i.e. full of joy, merry; light-hearted, carefree) disposition. From AIDS to Covid-19/20/21/22, apparently, one monkey too many.

Multiple sexual partners over the past 2 weeks: Is that moral behavior? Are they beyond judgement because they belong to a privileged group? And if that behavior contributes to the spread of disease within the gay “community,” do they bear any personal responsibility? Or are they just above it all because, you know, pride flag?

Another disease spread by gay sex that the MSM refuses to acknowledge is mostly a gay problem.

That will clean up the neighborhood in pretty short order.
The vaccine is pure poison.
What about San Francisco?