“White Supremacy is clearly a factor.” 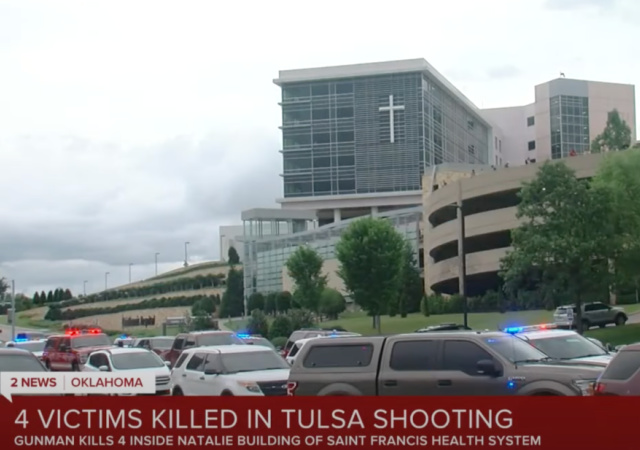 A gunman opened fire in the Saint Francis Health System’s Natalie Building in Tulsa, OK. He killed four people including himself.

No pictures of the gunman. No identification. Nothing.

Buried in a CBS article: “[Tulsa Deputy Police Chief Eric] Dalgleish described the gunman as a Black male believed to be between 35 and 40 years old and said he was armed with a long gun and a handgun. Both weapons appeared to have been fired, Dalgleish disclosed.”

But does anyone ever wait for facts? Nope. Gotta stick to your narrative.

NYC Assemblymember Rodneyse Bichotte Hermelyn knows she has to stick to her narrative because only white men could do something like this. They only paid attention to Uvalde because it happened at a school and the police failed the children and community. 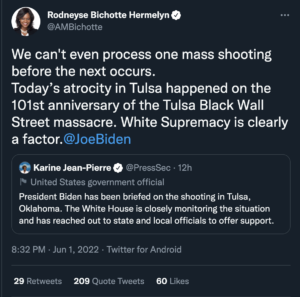 I wonder when people will whine about those non-existent assault weapons without knowing the gunman used a long gun and a handgun.

Democrats attack always with anything that is at hand.

Gone are the days of voting for the seemingly nice black candidate in America. They hate us and they wish for us to be made to pay for crimes we didn’t commit. This elected woman should be removed from office for such hateful divisive rhetoric. It’s clear she hates white Americans.

When all you have is a racist hammer every event looks like a white supremacist nail.

I don’t understand the gunman’s problem. He claims his back surgery was botched by this black doctor. Now this black doctor was likely an AA doctor, passed through college and medical school with a wink and a nod.

But so what? AA is all about quotas, not quality.

We do not know that he was an affirmative action doctor.
Maybe someone here knows how to find his file of patient complaints, disciplinary actions, etc?

” non-existent assault weapons without knowing the gunman used a long gun and a handgun.”
*****
FWIW, a AR or AK pattern, etc.,firearms, so called assault weapons, are “long guns”.

Elsewhere I read that he had a shotgun and handgun. A shotgun is also a long gun, but not one of the Left’s ubiquitous (and phony propaganda term ) “Assault Weapon”.

Nasty little secret is that shotguns are devastating short range weapons. Despite the erroneous Miller Decision at SCOTUS…. This was found out in WWI by the Germans. Every class of firearm has been a weapon of war and this disgruntled person was the issue…it the firearm. Being black means only the gun will be mentioned by the Dems.

A powerful shotgun with certain ammo will certainly shred someone at close range. The big difference is the slow rate of fire and loading for non-tactical varieties (and most tactical varieties cap out pretty low too…the practical problem is the size of the ammo in case)

I will challenge “slow rate of fire”. Standard Remington or Mossberg pumps can be rapidly fired. True… tactical reloads will be single with topping off taking about 20 seconds. As for ammo …. the lethality of the shotgun at close range is 2x to 3x that of a rifle… I am not talking about shooting people curled in fetal position crying out for police as in the case of the Tasmanian shooter or a bunch of helpless children cornered in a room. By the way, newer shotguns have detachable magazines.

Modern paper and plastic shotshells can’t be stored long-term in detachable magazines. The spring pressure will deform them. Old-school brass shotshell casings will hold up in magazines, but those are uncommon and more expensive to make.

The Miller decision wasn’t erroneous. There was no evidence in the record on whether a sawn-off shotgun would be useful to a militiaman, because it never occurred to the trial court to look for any. So having decided that this was the criterion for which weapons the 2a protects, the case needed to go back to a trial court for a factual hearing. Had that hearing ever been held it would undoubtedly have found that it would be, and therefore the court would have found in favor of Miller. But it was never held, because Miller was dead so the case was over.

Thanks for correction. So since no factual hearing… it became law. Rather convenient to not look for any evidence when sawed off shotguns were used in the Civil War and in WWI. Justice can be both blind and ignorant..

Well, no, it didn’t become law. The myth of Miller is that it found that sawn-off shotguns are not protected by the 2A. But it never found that. All it said was that it couldn’t, on the record before it, find that they are protected, so the trial court should improve the record and then rule accordingly.

In other words, if the trial court finds that such weapons have a military use then it should find for Miller, and if not then it should find against him. Since that hearing was never held, the end result was no finding at all as to the shotguns, but a new doctrine that the 2A protects an individual’s right to keep and bear any weapon that would be useful to him as a militiaman.

Of course the other myth of Miller was that it found there was no individual RKBA, which was always simply an outright falsehood.

It might be worse: one of those “La” names full of apostrophes and hyphens.

Is her middle name pronounced “bitch out?”

Gotta blame ol’ whitey for everything! *sigh* Yeah it’s sickening! Couldn’t even wait for more facts to come out before trying to push their agenda.

There’s supposed to be a press conference this morning around 10:00am. We might have some more details released then.

And from the press conference (still ongoing as I type) it looks like the shooter was angry at his doc over some back surgery that left him in some degree of pain.

The murdered surgeon was black also. The surgery was recent. So, it must be pushed as gun violence when every other angle ruins the narrative. so Biden goes off on handguns and bingo…he gets what he wants. I am tired of these coincidences.

My question is assuming the surgery just happened, did the Surgeon tell him there would be pain for a while & did he prescribe painkillers? If so & the suspect didn’t take the painkillers, then it’s on him.

He self identified as white

We’re all the people he killed white? Just asking for a friend

No. His doctor was black.

If you go to the UK Sun site, the picture of the shooter is interesting for the background which looks like a police line up room. I bet the guy was a frequent flyer with law enforcement… in part considering how many black men are in the system for offenses.

The common denominator isn’t race, choice of weapon or ideology but rather the mental health of the perp. Maybe instead of continuing at chasing shadows we could instead start addressing the failures of our mental health community and the very strict policies that constrain the ability to force an intervention and involuntary commitment if required.

Call the actions of mass murderers what you will; evil, narcissism, revenge, publicity seeking. Cast blame for how they ended up like this; broken home, no father in the home, abused or neglected, bullied, jilted lover, incel. What matters more than how they arrived at this place of violence is identifying the violent and would be violent and segregating them from their potential victims.

That doesn’t mean ignoring the factors that led them there, far from it. Those are larger policy questions that need a full examination of the impacts and a debate on solutions. It does mean prioritizing scarce resources towards the people who are today exhibiting signs of violence and indifference to the lives of others.

What the hell are you doing using logic, reason and rational thinking on a topic so full of emotion??!! Don’t you know we got assault weapons to grab from those thuggish law-abiding citizens???

Why wait for facts when you already have the narrative at hand?

Another mass shooting in a gun free zone. Who could have guessed as to location?

Must be one of those “white supremacists of color” that we often are told about.

When you have a regime that insists on trailblazing the country, this is the obvious result

I read an early report suggesting the shooter was looking for a specific doctor.

” the shooter was looking for a specific doctor.”
*****
Apparently that is a common motive in hospital shootings. A few years ago, I was in local ER with MIL and was talking to a nurse that I knew. He had done research on hospital shootings and that was the most common reason cited. He presented data to hospital admin. and they reversed their “gun free” virtue signaling. He worked in the OR and said about 1/3 of staff there were armed.

Years ago I applied for a CCW in a SoCal city where my hospital job was. Responding for in hospital procedures at all times of the night… etc..etc. I could spend time on the bogus questions on police exam such as “do you participate in “quick draw competition” but the key is denied as I could avoid trouble. If I couldn’t… it was my own fault. Sound familiar? Can’t have physicians being armed. As the Dems have said… unless “federalized” you don’t count.

One doctor at my hospital had all of his tires slashed. The doc was a good doc. Medicine is not perfect even when all of the variables are covered. So…. because of “inadequate pain control” this guy murders 4 and then contacts his wife to say what he did before offing himself? It has become accepted that it is OK to go out in a blaze…. gee …. thinking of George Floyd and the Summer of 2020. Morals? What morals.

“White Supremacy is clearly a factor”

Leftists have a large problem with reality. Just like a man really really wanting to be a woman, then you are. A black assailant can be a white supremacist.

Well, obviously, he was a white supremacist of color!

Media, “QUICK, GRAB A SHOVEL!!!
People, To bury the dead?
Media, No, the story…..the shooter was BLACK!

He had a white sounding name.

Wait … I thought Larry Elder was the Black face of White Supremacy… That was what the LA Times told me.

Why let such pesky conceits as “facts” stand in the way of propagating an utterly contrived, yet, politically potent narrative, that of the allegedly ubiquitous “white supremacist” who is responsible for every single one of society’s ills and for every incident of criminal behavior?

“…according to the intelligence community, terrorism from white supremacy is the most lethal threat to the homeland today, not ISIS, not Al Qaeda, white supremacists.” Joe Biden June 1, 2021

Notice that the Marxocrats are leaving “assault weapon” behind in favor of “weapon of war” because THAT hyperbole can be defined on a case-by-case basis.