A quaint town filled with history and literature! 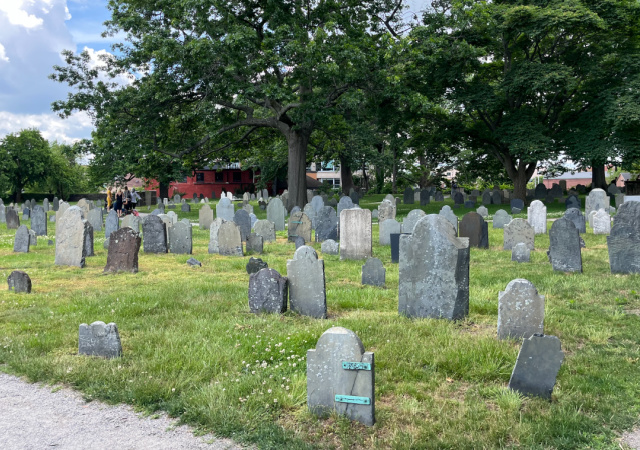 Salem, Massachusetts, is only around 40 minutes north of Boston.

It reminds me of Tombstone, a small town now a devoted tourist attraction. In other words, you must go! The town embraces its unsavory history by putting truth to the witch trials but also helps you understand the culture at the time. You understand why the young girls were able to get away with accusing innocent people of witchcraft for a few months.

The Witch House is not an actual witch house but has a dark connection to the Salem Witch Trials. It is the only standing building that has direct ties to the trials.

Jonathan Corwin, an heir to a large Puritan fortune, served as a judge during the Salem Witch trials. He was also the brother-in-law of John Hathorne (remember Hathorne!!). 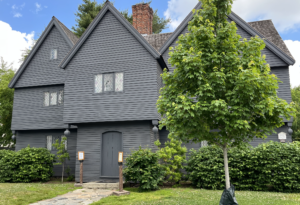 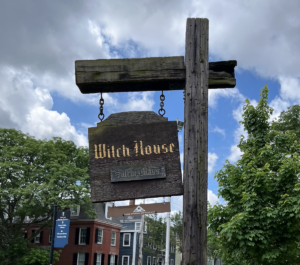 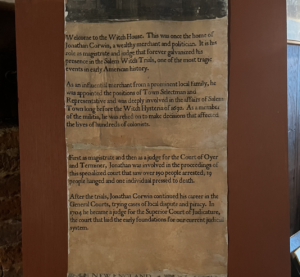 The house has copies of documents from the witch trials, including ones pertaining to Tituba. If you read The Crucible you know that she’s the central person to the hysteria. The poor lady thought if she confessed they’d go easy on her. 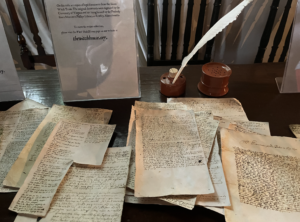 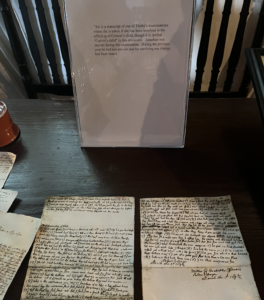 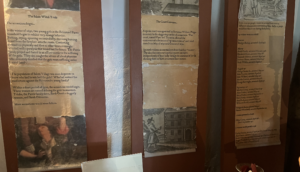 The house included artifacts explaining how the Corwins lived but also how the Puritans took steps to protect themselves from witches and demons. 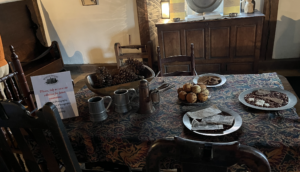 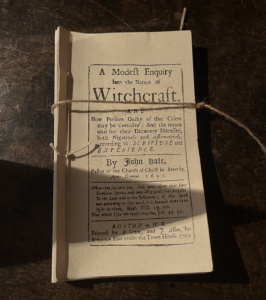 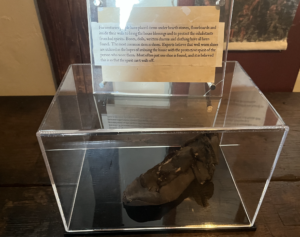 Then we walked to Old Burying Point/Charter Street Cemetery. It is the oldest graveyard in Salem with some prominent people.

Next to the cemetery is a memorial for those murdered during the witch trials. Giles Corey is the most sympathetic (besides quiet Rebecca Nurse) because they pressed him to death. Could you imagine being pressed to death? It took him two days to die.

In the cemetery is judge John Hathorne. I mentioned him above with Corwin.

Hathorne is a distant relative of great American author Nathaniel Hawthorne. Nathaniel added the w to his last name, which also changed the pronunciation to distance himself from his relative. So HAY-thorn became HAW-thorn.

So many headstones are faded and broken. 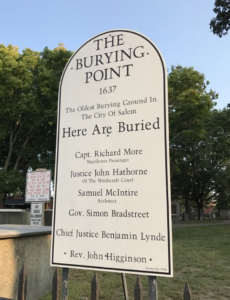 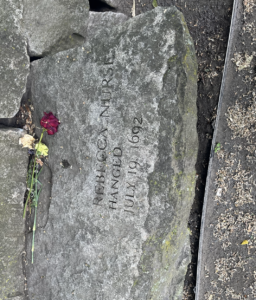 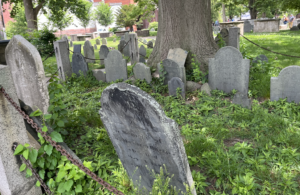 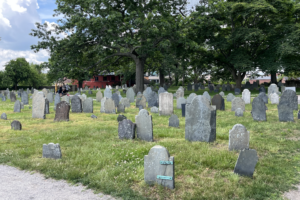 The House of the Seven Gables

I do not like American literature except for Nathaniel Hawthorne and Edgar Allen Poe.

Maybe it’s Hawthorne’s use of symbolism that drives me wild. “Young Goodman Brown” never gets old.

What is a gable? It is “the vertical triangular end of a building from cornice or eaves to ridge.”

John Turner I built the house that will become known as The House of the Seven Gables in 1668. He made his fortune through trade in Salem Harbor, which was the top place in Massachusetts at the time. His son John Turner II inherited the house but had to sell it after he lost his fortune. 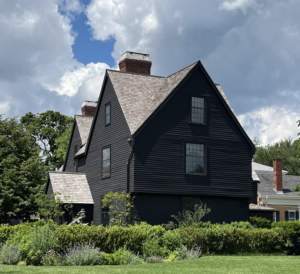 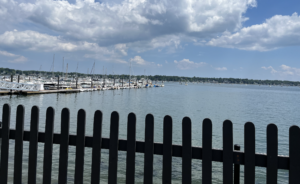 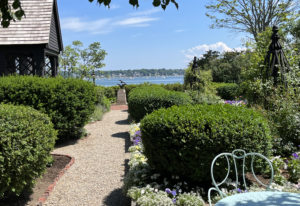 But Samuel’s daughter Susanna is the most interesting character. She inherited the house after her parents passed away. She refused to get married because then all of her assets would become her husband’s. She didn’t want to lose her childhood home to her husband. Susanna went into real estate and grew her fortune on her own. She also adopted a son named Horace Connolly.

So Susanna worked as a single mom and made a fortune on her own. That’s so cool.

Nathaniel visited Susanna and listened to her stories from her childhood. He wrote The House of the Seven Gables.

Horace couldn’t afford the house so he sold it to the Upton family. The House of the Seven Gables became popular and people showed up wanting to tour the house.

The Upton family allowed this and held tours of the house!

The Uptons sold the property when they moved. It is now a protected park thanks to Caroline Emmerton. She purchased the home in 1908 to preserve it since so many people since the 1890s wanted to visit the house in the famous book.

Caroline also put built into the house some parts of the book. If you read the book you’d know the main character had a shop to make some extra money. Caroline added that off the kitchen. Silly me forgot to take a picture of it.

Yes, Caroline even added the secret staircase by the fireplace! (It was such a tight fit I couldn’t take pictures.) 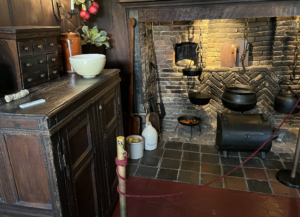 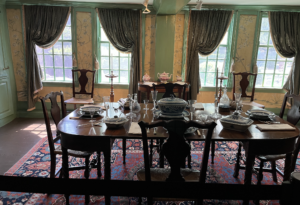 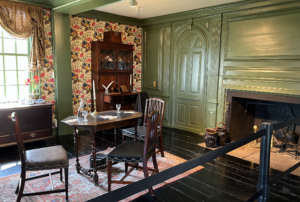 The park also bought Hawthorne’s childhood home! A church wanted to tear it down for a parking lot. So the park bought the home for $1 and moved it to the property. It includes the room Hawthorne was born in!!

I LOVED being in the area and home of one of my favorite authors of all time. 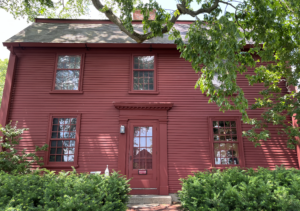 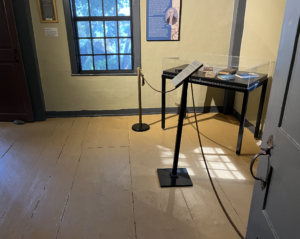 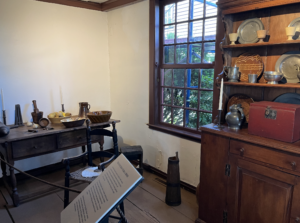 Thank you for the lovely posts with delightful pictures! I am enjoying them.

If you make it to Plymouth, then check out the Grist Mill. It is a reconstruction of the Jenney grist mill and they still make a great cornmeal. Originally operated by an ancestor of mine.

My husband’s 11th grandfather was Robert Mouton, who was a character witness in favor of Rebecca Nurse.

He might have thought his words were enough to see her not be declared a “witch”. However, those satanic harpies were louder.

I wonder how he mourned, for the rest of his life, the fact that his good words of “good, Christian character,” were not enough.

If only Nancy Pelosi lived back then, a true witch if there ever was one.

So Susanna worked as a single mom and made a fortune on her own. That’s so cool.

It sounds more like she inherited a fortune from a wealthy father and sat on it, watching it grow. I’m not sure Paris Hilton is a role model.

Nathaniel Hawthorne, once declared the handsomest man in America, and his bride Sophia spent their honeymoon in the Manse on the Concord River in sight of the Old North Bridge. Their landlord was Henry David Thoreau. I hope Concord is on your tour as well. Hawthorne, Thoreau, Emerson, and the Alcotts all neighbors.

Concord, MA is great! I actually loved living up there for the history and the scenery (and the seasons, miss those), but the politics made it a nightmare. A true story about Walden’s Pond: when we stopped by there to see it, there was a huge sign warning people not to swim. I’m not a fan of lakes, so that wasn’t happening anyway, but we found out later it was because there was too much urine in the water. Ick.

Definitely, a path less well taken after hearing that!

Could we send Hillary Clinton back in time to Salem? At least then the trials would be appropriate.

Please write down your complete itinerary when you are done…please

Borderline personality’s have destroyed so many lives, as today, throughout history

Why does no one stand up to these fools.

I use to have to work with patients that were primarily BP and in the past, the good Docs knew how to set limits, but the new Docs, mainly women, unfortunately, and as nuts as the patients and no one gets better…
Think these college idiots, AOC, Antifa
All nuts cases and BP

My diagnosis was always , “if the hair on the back of your neck stood up after any interaction with them”

The men who
Made the decisions and did the dastardly deeds didn’t seem to have any consequences themselves, quite the contrary

Another fantastic travelog episode.
I vaguely remember doing this exact tour in early teens, maybe not even that.

Ten-year-old me: “I guess that witches & gables stuff is cool, Mom. Can we get ice cream now?”

What makes Giles Corey’s ordeal even more poignant is that if he’d confessed to witchcraft, his property would have been confiscated. By refusing to confess, he would die a Christian in good standing and his children would inherit his land. His alleged last words (as depicted in The Crucible): “More weight.”

If I remember correctly, the culprit behind these trials was the preacher. A former ship captain, he came to Salem to become the preacher but became bitter when the townspeople denied him a lifetime sinecure. So he targeted “witches” who owned property which he confiscated. I forget what ultimately became of him.

It is also important to remember that these witch hunts were imported from England where it became a very serious problem. Salem pales in comparison.

Regardless of where you are…history is all around you. Where the NE is witches, Brits, and the war between the states….

Texas is six flags, Indians, Mexicans, Texians, and such…look for the Germans, Czechs and all!

Go to Europe, and be awed by the time…

all places have time as an element…just what occured is the entertainment….