My American History Tour: Newport Mansions and I Finally Met My Boss

My American History Tour: Newport Mansions and I Finally Met My Boss

I found my new summer vacation house to replace the one I do not have. 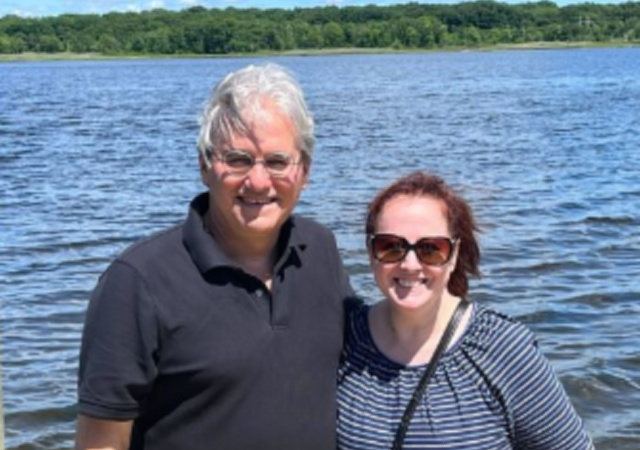 We spent Wednesday in Rhode Island. I mean, how do I go to go to Boston and not visit my boss and his wife Wendy?! 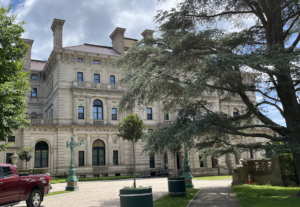 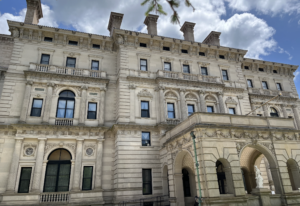 It’s called The Breakers because you can hear the waves breaking on the coast in the backyard.

The Gilded Age (1870 to 1900) was a time of economic growth, especially in the North after the Civil War. Industrialization boomed thanks to immigration and hardly any government red tape. People made fortunes while others lost their money.

But the Gilded Age is when America became the most powerful nation in the world.

Cornelius II took over as chairman and president of the New York Central and other railroads in 1995.

The money helped build the iconic The Breakers in Newport between 1893 and 1895.

Cornelius II purchased the grounds in 1885 after the previous cottage burned down. He paid $450,000 for the grounds. That’s $13.6 million today. No biggie.

Cornelius II and his wife Alice wanted to prevent destruction so they used stone, steel, and brick for their 48-bedroom estate on 13 acres. It has 70 rooms altogether and 27 fireplaces.

The spouses wanted the kitchen and boiler to be as far away from the main part of the house as possible. This way it would be easier to prevent fires from coming to the house along with cooking smells.

But Cornelius II only enjoyed one summer at this glamorous cottage. He had a stroke in 1896 and passed away in 1899.

Alice lived until 1934. She left The Breakers to her daughter Countess Gladys Széchényi. She married Count Laszlo Széchényi in 1908. He was a member of Hungary’s top family and a minister to the Court of St. James in London. He later became a minister to the United States.

Gladys did not have any property in America. Plus the other kids didn’t care for the cottage while Gladys always loved it. Who wouldn’t love it?!?!

The Preservation Society of Newport County leased The Breakers from Gladys for $1 a year in 1948. She allowed them to have tours of the first floor. Gladys’s daughter Sylvia sold The Breakers and 90% of the stuff inside of it to the society in 1972.

When Sylvia died in 1998 she made the society promise the family can still live on the third floor.

We only get to see a handful of rooms. Literally, only a handful considering the size of the cottage.

However, the place overwhelmed me too much. I forgot to take a lot of pictures.

The Great Hall and the Grand Staircase: 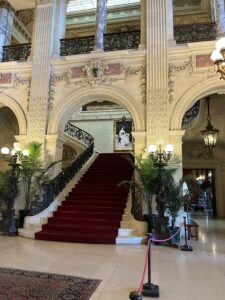 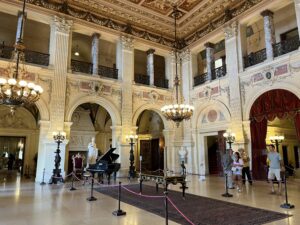 The Breakfast Room or Dining Room. I cannot remember which one now! 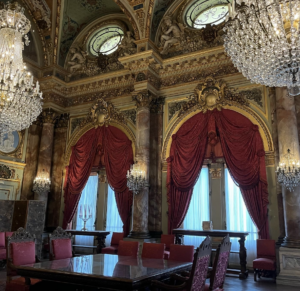 The sitting area in the Billiards Room. 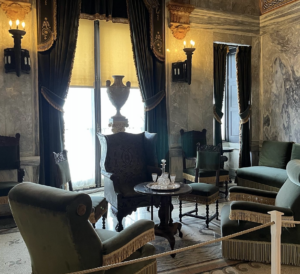 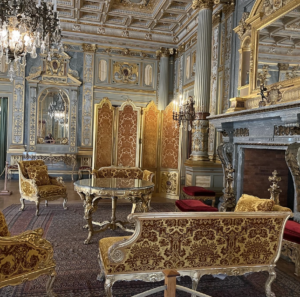 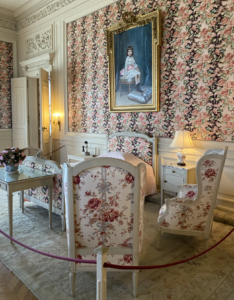 The Gallery. John La Farge made the stained glass ceiling in the Gallery. He originally made it for the Vanderbilt residence on Fifth Avenue.

The tapestry is from the 17th century by Dutch artist Karel van Mander. It’s about the life of Alexander the Great. 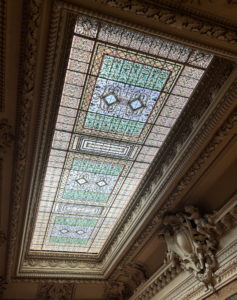 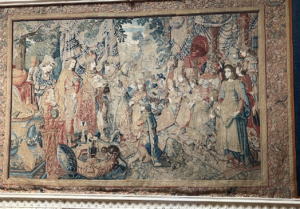 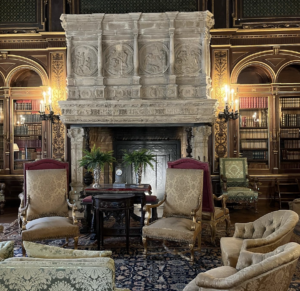 THE VIEW. I would sit out here all day. Read my books. Finish all my cross-stitching projects. 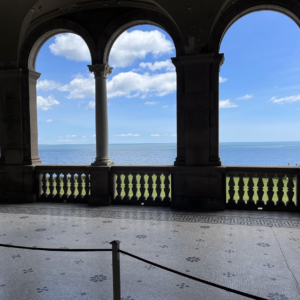 What can I say about Professor and Mrs. Jacobson that will do them justice? I don’t know how to put it into words. Warm, welcoming, and kind. I’m such an awkward person (yes I am believe it or not) and immediately felt at home! I’m so lucky to have this job and Bill’s trust to run the blog. Every once in a while I float the idea of libertarian and cat posts!

We had a delicious lunch and talked away the afternoon. It was my favorite part of the trip by far! Love those two so much and am beyond blessed to have them in my life. 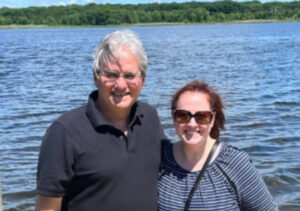 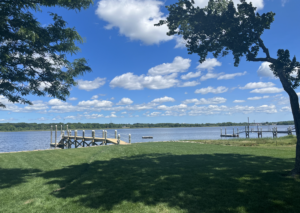 What a treat!
I’d prefer a visit with the Prof. any day over The Breakers!

Nice photos! After viewing the home, I would be on the water fishing.

The pictures of the Breakers reminds me of this quote from the movie “Diner”: “Do you ever get the feeling that there’s something going on that we don’t know about?”

If you’re driving back south through NY, you should stop at Sleepy Hollow, just north of NYC. Of course, it’s the home of the legend, but it’s also where the Rockefellers had their home Kykuit. Beautiful town, lots of history. I am biased since I was born and raised there, but you’d love it.

Tour price is $21. And you get to see only a very limited number of the rooms, and that only as part of guided tour. Meaning, you can’t roam around.

What’s been astounding to me, on the several times I’ve been to this “cottage,” is that this building and its grounds (including a really impressive stone and iron fence around the perimeter) is that it was done within 2 years. With no CAD, no hydraulics, primitive telephone, that all the precise, detailed architectural drawings, ordering of materials, assemblies of a sizeable workforce/s (many of specialized skills), and the coordination of all those workers (who in addition had to be given room & board) and arrival of materials (w/no 18-wheelers and no interstate highways), plus doing the huge amount of paperwork plus coordination the financing of workers and materials, it’s truly remarkable that this came together.

Amazing how far we’ve fallen since then.

Indeed. At the end of the Gilded Age we had a President like Teddy Roosevelt. IMO one of the biggest mistakes our Founding Fathers made was not to put term limits into the constitution. It appears that they overly appreciated the wisdom from long service and just could not imagine a Joe Biden.

American exceptionalism …. When we believed it ourselves
Much like WW2 and turning our factories into making tanks, planes and boats

Not as many onerous regulations in those days. Getting the job done was the priority, not appeasing bureaucrats or coddling the workforce.

Please tell me you didn’t leave Barrington without visiting the Vienna Bakery. If you’re still there, have a sfogliatelle for me (I can’t have them anymore).

You should visit Watch Hill. That’s where the Newport crowd built tiny 10,0000 square foot beach houses together away from their stodgy mansions. Bogie and Bacall honeymooned there.

Mary, you’ll have to fill us in sometime about what it’s like to tour the sprawling riverside Jacobson family compound. I hear it’s grand.

Small world how you ran into the Proff and Mrs out of the blue.
Another great travelog.

Such a great visit… When I lived up north, I used to visit Newport,, off season.. Loved it.. absolutely.. of course I went to the tennis museum… What a great tour,, thank you so much.. and meeting the good Professor and Mrs. Jacobson… Thank for sharing all of it…

A tour of the mansions in Newport will leave your mouth open as most have no idea there is that much money in the world or the showpiece old world class it was used for. As an aside, the only time i met the “big boss” on one of my jobs he fired me. Opps

Very cool pictures and travel commentary — thank you for sharing it.

“I’m such an awkward person …”

You can’t be any more awkward than I am.

Driving with my wife to meet Bill and Wendy for dinner here in L.A. one evening a few years ago, I asked my wife, “When was the last time we went out to dinner with another couple?”

My wife looked at me and said, “This is the first time, Mr. Social Phobia.”

Bill and Wendy are so nice and down to earth. Salt of the earth!