I want a pet raccoon. 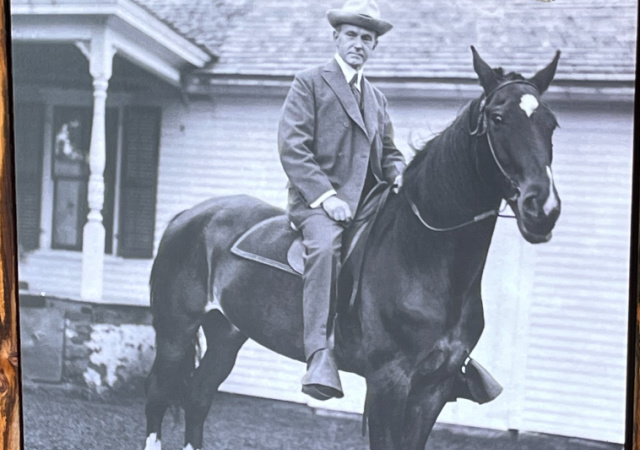 George Washington is my favorite Founder and president.

Both are from Vermont so I had to visit. Well, Allen is from Connecticut, but he made Vermont his home.

I want to name a son George Calvin.

John Calvin Coolidge, Jr., was born in Plymouth, VT. There were about seven villages in the town. Calvin was born and raised in Plymouth Notch.

The entire village is preserved exactly as it was when Calvin was alive. It has the General Store, the barns, his birth house, his homestead, the school, the church, and even the Plymouth Cheese Factory that his father established!

I could write a biography on Calvin right now but I don’t have the time. I encourage everyone to read up on our 30th president along with his Treasury Secretary Andrew Mellon. They are a small government, fiscal conservative person’s dream come true.

Everything in Coolidge’s birth home is authentic and original. This is the room he was born in. 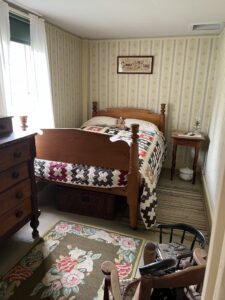 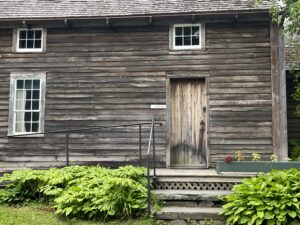 Coolidge’s dad bought the house across the street. 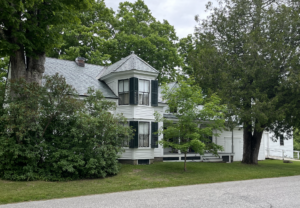 Calvin’s dad instilled a hard work ethic into his son. He never lost his love of the quiet farm he lived on during his childhood. The house and barns have pictures of adult Calvin working in the fields. 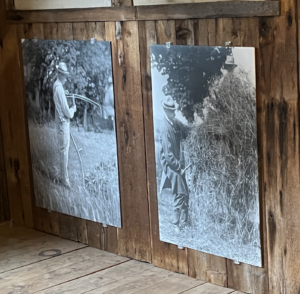 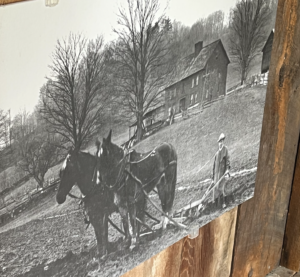 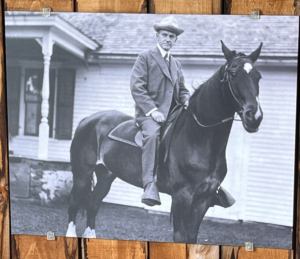 This quaint house is also where John Calvin Coolidge Sr., a notary and the constable, swore his son into the presidency.

It was the perfect setting for the quiet and humble man who only spoke when needed.

Here’s the story. President Warren G. Harding died of a heart attack in California on August 2, 1923.

Calvin was up in Vermont on vacation working on the family farm. The house had no electricity or a phone. John Calvin Sr. hated the idea of a phone.

A telegram tried to go through at the General Store across the street. The lady said she did not hear it but it’s also possible she didn’t know how to use a telephone or the service. It was brand new to their little spot in Vermont!

The man in another town who had to get the message to Calvin jumped in his car and sped to Plymouth Notch with the news.

Calvin went back to bed.

Calvin went back to DC the next day where Justice Adolph A. Hoehling Jr. administered the oath just to make sure that no one could question if a state official could administer the federal oath.

The swearing in took place in this room. 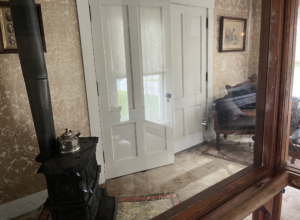 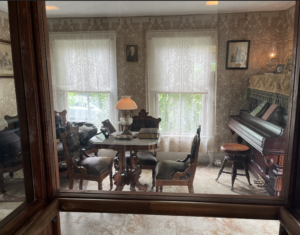 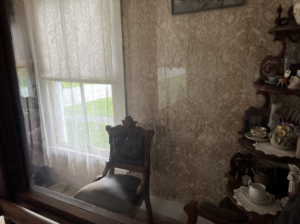 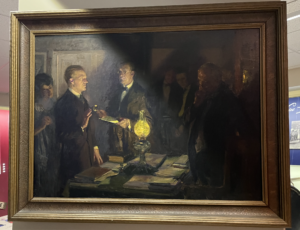 Calvin and his family are buried across the street. The headstone is perfect for him. 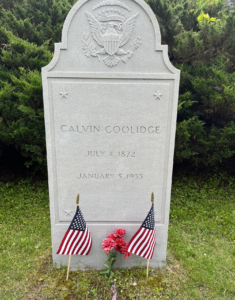 His son John Calvin died in the White House. His foot developed a blister after he played tennis on the WH lawn. It got infected and he died.

Calvin wrote in his autobiography, “When he went, the power and the glory of the Presidency went with him.” He was never the same.

Calvin’s other son John lived until 2000.

Did you know Mrs. Grace Coolidge is the first First Lady to hold a college degree? She went to the University of Vermont and earned a BA in teaching. She taught at the Clarke Schools for Hearing and Speech. She encouraged deaf children to communicate by lip reading.

The Coolidges received a raccoon in 1926 for Thanksgiving dinner but they fell in love with her. They named her Rebecca. 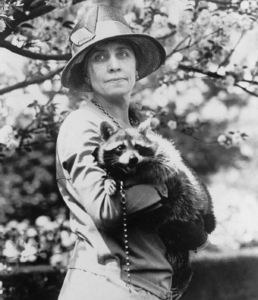 Everyone read the book Ethan Allen: His Life and Times by Willard Sterne Randall.

America’s first libertarian. The Founding Father no one knows about.

The man who won Fort Ticonderoga! Without those firearms, ammunition, and equipment we wouldn’t have won the war.

Ethan Allen was a loudmouth drunk who didn’t give a damn. He was a man who just wanted to be left alone by everyone, especially the government.

Again, like Calvin, I could write an autobiography of Allen right here but I don’t have the time.

Allen’s rambunctious behavior began with the New Hampshire grants. New York kept trying to take over the land granted in the grants. Allen and his Green Mountain Boys did not like the intrusion so they did everything they could to push back.

You could say Allen wrote one of the first libertarian writings in America. Look at the title: A Brief Narrative of the Proceedings of the Government of New York Relative to Their Obtaining the Jurisdiction of that Large District of Land to the Westward of the Connecticut River.

In the middle of the night, Allen and his boys (also with Benedict Arnold) showed up at Fort Ticonderoga and demanded the Redcoats surrender.

Lt. Jocelyn Feltham demanded to know on what authority the men had to enter the fort.

“In the name of the Great Jehovah and the Continental Congress!” boasted Allen.

Nobody died. We took it and thank goodness we did!

The Green Mountain Boys were reckless. So was Allen. General George Washington liked him though! So that’s a plus.

So much more happened but I won’t get into it. Let’s just say Allen remained at war with New York over Vermont state lines, he got ticked that the Continental Congress dragged its feet on giving Vermont statehood (it became the 14th state on March 4, 1791).

Allen got so mad he even went to Quebec about prisoner exchanges and making Vermont a new British province so the residents could have military protection. Some thought of this as treasonous but nothing came out of that.

Allen went down in favor after he published Reason. But he wasn’t too nice about religion and a lot of the critics were clergymen.

Allen married his second wife in 1784. It was a happy marriage even if Allen moved them to this house in Burlington. Unfortunately, unlike Coolidge’s home, Allen’s home has been passed through so many hands. The home had to be gutted and put together like it was during his time. We have nothing of Allen’s so everything is a replica. 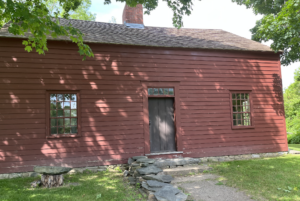 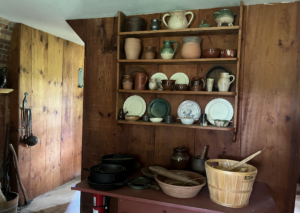 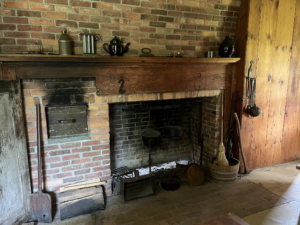 This is the original wood though. They could salvage something! 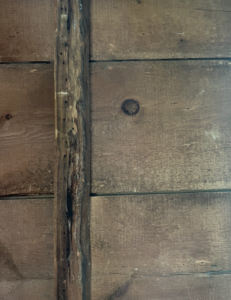 But yeah that’s why we say “sleep tight” because they could only sleep well when the base of the bed was tight. 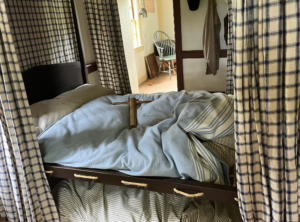 The tour guide said this device is why we have the phrase “pop goes the weasel.” It’s a threader and would pop when you reach the amount you need. I guess it’s called a weasel? 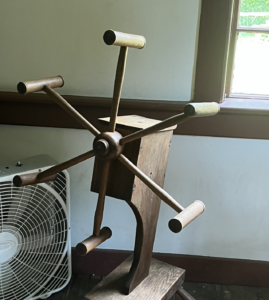 But man Vermont stole my heart. What a gorgeous state!! It was so peaceful and serene. The landscape and small towns made me feel at home.

A small but geat state that gave this country two great men. I talked to a Vermont Park ranger who was proud that Vermont was a republic then a state. Now Vermont is full of elitist socialists who give us Bernie Sanders and Leaky Leahy.

It’s so bizarre! I loved Vermont and would love to live there.

Despite being located next to a couple of very blue states, Vermont is home to reasonable gun laws.

Plus with lefty politicians! It’s such a beautiful state. I want to go back!

I love Grace Coolidge’s official White House portrait. Looking beautiful while her collie Rob Roy gazes at her adoringly. I’m pretty sure it’s the only official of a First Lady which includes a pet. Very classy.

She and Calvin are two peas in a pod. She was so outgoing which complemented his quietness. You’re right her portrait is the only one with a pet. A very classy and humble lady no one talks about even though she had a college degree and worked for women’s rights.

I went to a David McCullock lecture at CalTech on his “1776” book tour where he gave examples of how many times the Revolutionary forces escaped miraculously from major defeat. One was how the Green Mountain Boys took a large cannon from Fort Ticonderoga and transported it in mid-winter to Boston. There was an episode where the cannon fell through the ice as they were dragging it across a lake and they had dive in to get it out. They delivered the cannon in the middle of the night at Dorchester Heights in Boston which overlooked Boston Harbor. When the British navy ships saw that gun in the morning, they cancelled their planned barrage and invasion of Boston and headed out to sea. Had that cannon arrived less than a day later, we might have lost the war that day.

Instead, that British flotilla joined with other ships at sea and went on to stage what would be the largest naval beach landing in history. It wasn’t until D-Day in WWII that a larger one would overtake it.

Forgot to point out that the British beach landing was at Manhattan thus routing and chasing out George Washington’s Continental Army and where Washington made his miraculous “crossing the Delaware” escape. McCullough quipped that there were so many times during the revolutionary war that it seemed like God surely was helping with divine providence. His book “1776” is must reading.

A British designated marksman at one point had a clear shot at Washington, but declined to take it, as military tradition of the time considered it dishonorable for one officer to engage another unannounced.

I had him autography my copy on his book tour. When I got to him I said – this was a terrific read, thanks. He said – You already read it?! He was surprised because it came out that week. I said – I read this thing in 2 days!

I’ve read most of his books and they are all great. There are always segments when he captures a moment with poetic prose. He has a gift with words. All of his books are only as long as they need to be. “1776” was probably the most captivating 200-page book I ever read.

I never thought I would actually meet him and I had never asked anyone for an autograph before (and only once since). I wish I had thought about what I would say to him. Too late. I blew it.

YES EXACTLY! How does one not consider a higher power exists when reading about the Revolutionary War? We should have lost and like David said…SO MANY MIRACLES. We also just happened to have all those great men alive at the same time in the same place with the same ideas about natural born rights and freedom!? A higher power worked through the men and those who fought to give us liberty. LITRALLY a miracle!

And she was the first First Lady with a college degree. Altogether a very impressive, very caring woman.

TY Mary.. this is such a treat.. I feel like I am peeking over your shoulder..

You’re welcome! I could write a novel about Calvin and Ethan. I hate that no one knows a lot about them. The Coolidge tour impressed my mom. I’m like OH NOW YOU LISTEN. I’ve only talked up Calvin so many times with her. 😂

Another great travelog, thanks

Vermont has insanely high taxes, a younger generation that wants only to smoke dope, and a bunch of very obnoxious New Yorkers with vacation homes. Ethan Allen’s Green Mountain Boys would today be indicted as homophobic environmental despoilers and any young brat made to work Coolidge’s farm for half a day would seek lifelong treatment for PTSD.