Death squad comprising of “eight suspects, including Iranian nationals, who were plotting attacks on Israeli citizens in Turkey.” 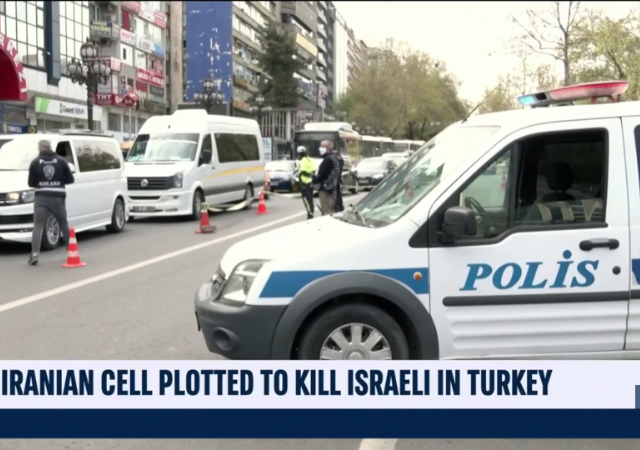 The terror cell, comprising of at least eight Iranian and local operatives, was picked up by the security services at three separate locations in Istanbul. “Security forces raided three residences across the city and a hotel in city’s Beyoğlu district, apprehending the suspects and seizing weapons,” Turkish newspaper Daily Sabah reported Thursday.

Besides Israeli tourists, a retired Israeli diplomat and his wife were also in the crosshairs of the nabbed terror cell. The couple was flown back to Israel ahead of the security operation.

“Among those who were being targeted for kidnapping were a former Israeli diplomat and his wife,” The Times of Israel wrote. “Israel’s Mossad spy agency chartered a private plane to immediately bring the pair and others back to the country,” the news outlet added.

Turkey’s National Intelligence Organization (MIT), together with police, busted the Iranian intelligence service operation on June 17, according to Hurriyet Daily News. The report said a former Israeli diplomat and his wife, who were staying in a hotel in Istanbul’s Beyoglu district, were also targeted by the operatives.

Nearly ten suspects, who were not all Iranian nationals, were detained in a raid on three houses. The intelligence agents were disguised as students, while members of Iran’s Revolutionary Guards were undercover as businessmen and tourists to kidnap and to assassinate Israelis.

The Iranians had split into four groups of two assassins who could better track their Israeli targets.

“The hitmen in the assassination team, who settled in two separate rooms on the second and fourth floors of a hotel in Beyoglu, were (detained) with a large number of weapons and ammunition,” IHA said.

The Israeli intelligence and security agencies played a role in foiling the Iranian terror plot in Turkey, Israel Foreign Minister Yair Lapid indicated Thursday. “The lives of Israeli citizens have been saved in recent weeks thanks to security and diplomatic cooperation between Israel and Turkey,” Foreign Minister Lapid said Thursday, adding that the “efforts are ongoing.”

Lapid, who is expected to take over as Israel’s caretaker prime minister after the recent collapse of the ruling coalition, is presently in Turkey for diplomatic talks.

Israel sounded the terror alert for its tourists and nationals after intelligence reports late last month warned of an “immediate” attack by Iranian death squads on Israelis on Turkish soil. The Israeli foreign ministry cautioned travelers of “a real and immediate danger” in Turkey. The Iranian terrorists were on the lookout for “Israeli citizens in order to kidnap or murder them,” the ministry said.

The foiled terrorist plot in Turkey comes after several critical operatives of Iran’s Islamic Guard (IRGC) and scientists connected to the regime’s rogue nuclear weapons program were reported killed in apparent targeted hits. The Iranian regime blames Israel for the recent killing of its WMD specialists.

Turkey stepped up? I am pleasantly surprised

I’m in One Of My Moods. So, reading the headline in a different way: why are Israelis being nabbed in Turkey in the first place?

Seems the Turks don’t like sunnis or shiites killing people in their country.