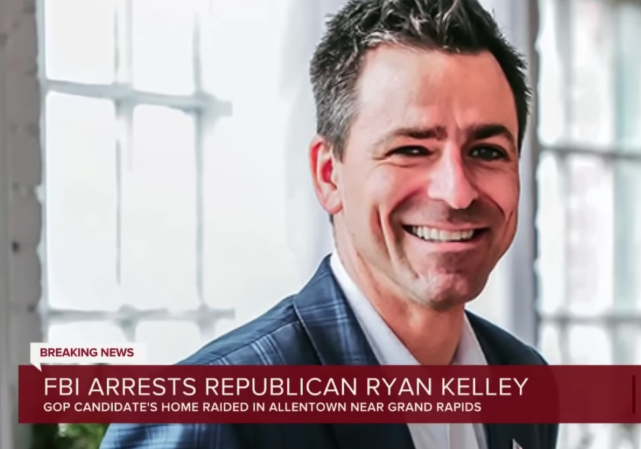 The FBI raided the home of republican gubernatorial candidate, Ryan Kelley, and arrested him Thursday. Michigan Live with the story:

Republican gubernatorial candidate Ryan Kelley was arrested and his Allendale home searched by FBI agents Thursday morning, in connection with his involvement in the riot at U.S. Capitol on Jan. 6, 2021, an FBI spokesperson confirmed to MLive.

Kelley was present for the Jan. 6, 2021, rally and subsequent riot at the U.S. Capitol, and in the past asserted he did not enter the building.

A document filed in federal court says he has been charged with four misdemeanors related to unlawfully remaining on the U.S. Capitol grounds and his involvement during the riot that took place there. If convicted, Kelley could face up to four years in federal prison.

“As far as going through any barricades, or doing anything like that, I never took part in any forceful anything,” Kelley told MLive in March 2021. “Once things started getting crazy, I left.”

Kelley assisted other rioters who were tearing down barricades, the charging document filed in federal court alleges, with screenshots from videos to corroborate their descriptions. The document also alleges Kelley was gesturing to the crowd to move toward the Capitol entrance ultimately breached by rioters.

“I think that event was definitely an energizing event, right?” Kelley said in 2021. “It will live on in history, absolutely. For a lot of different things.”

Kelley is one of five remaining candidates in the Michigan’s Republican gubernatorial primary after half the field was removed from the ballot over fraudulent nominating petition signatures.

Right, because it’s totally normal to raid someone’s home over FOUR MISDEMEANORS. The January 6th show was how many months ago? 18? And they’re *just* now finding this guy? Get outta here with this crap.

Are you paying attention yet?

FBI in Michigan, who had previously coordinated with the Governor in a kidnapping plot designed to affect an election, arrests her top political opponent for being present at an event on the day a primetime TV special on that event is airing

There was the Checka, followed by the NKVD, then the NKGB and now the FBI. The tradition continues.

The US government has declared war on citizens. Absolutely everything they did yesterday was to signal that dissent will not be tolerated and will be stopped by any means necessary. Anyone with any link to Trump is a criminal. No accident this happened on Jan 6 Circus Day.

Why hasn’t the FBI been disbanded yet?

They have dossiers on anyone who would even voice the idea.

Because Bitch McConnell and the RINOs don’t WANT it disbanded.

This is probably correct. They won’t realize how wrong they are until it’s their turn to be perp-walked on trumped up charges.

Oh, they realize it. They aren’t the ones who are naive, we are. We keep wasting our time trying to “wake them up”. They are and have been awake from the beginning.

The first person to testify at yesterday’s Circus:

Barr, Cheney, Mueller, Pence, Bush, etc, etc, etc…….. You can peel the onion forever and never get to the onion itself. And they have declared war on us. Yesterday was the beginning of the final push to save themselves from their biggest threat: Trump. Not DeSantis. Trump. I wonder why that is? The insurrectionists themselves accusing Trump of insurrection.

The FBI is beyond salvation. My fervent hope is that the next Republican President dissolves the Bureau so all the protected “civil servants” can be let go never to be rehired. All the functions of the FBI should then be transferred to the US Marshal’s service.

This country was founded by those fleeing tyranny. Now it wants to run right back into its arms again.

America has lost any moral high ground to go preaching to other countries about anything.

When the government starts arresting politicians from the opposing party and only them, the civil war has started.

Isn’t it weird how every single republican challenger of Gretchen Whitmer’s has been either disqualified or imprisoned?

Isn’t it weird how FBI agents concocted a fake kidnapping plot against her and almost got normal citizens arrested for a plan they spearheaded, and then this happens?

Boy, what are the odds? Not great.

Not so weird when you consider Obama’s political career.

My tinfoil hat is screaming, “GROOMING!”
Not in the Disney sense, in the Obama-DNC-keynote-in-2004 sense.
I submit that our Swamp has great plans for our Gretchen.

Let’s recall that five other r candidates for Gov were recently disallowed due to ‘discrepancies’ in the signature requirements for candidacy. Now this guy gets in essence ‘swatted’ as opposed to a simple phone call to turn himself in. For misdemeanor charges mind you.

Funny how ballot requirements and a tough on crime stance seems to vary depending upon the political orientation of those involved. This is a dangerous path that will result in turnabout in one way or another. I certainly hope everyone pushing this course is fully prepared to endure their own turn as whipping boys and aware that the pendulum does eventually swing the opposite way.

I don’t think they plan to give the other side a turn.

Perhaps inaction may spur militant members of the other side grow impatient and take matters into their hands. The problem with going down this path is there are only two certainties; it will be both violent and unpredictable. We should hope to avoid this.

I agree. I have no real hope of any other possible solution, but I hope I am wrong.

In the past I would have agreed with you. Now I believe that RINOs like McConnell and McCarthy will ensure that there is no turnabout.

If they resist reasonable efforts can they remain in office? Who’s to say some highly PO partisan actor won’t target them for violence? I ain’t encouraging or endorsing the idea but there are extremists on all sides. See Justice Kavanaugh or Rep Scalise or Sen Paul.

And we have a Veep who openly aided and encouraged looters and arsonists.

Have we arrived at the point where we are willing to admit our government is illegitimate, dishonest, and oppressive?

With a pedophile like Biden in the oval? Yeah, it’s illegitimate, dishonest and oppressive.

This is so OBVIOUS! Is there anyone that doesn’t see the FBI as the Dem-Tool that it apparently is? Who is the person at DOJ that set this up?

I assume that he is, like others arrested for J6, being held in solitary, with no bond or hearings therefore, in conditions equivalent to what is referred to in the incarceration business as Administrative Segregation-Max. Mind you, under Federal regulations and numerous Federal court orders all over the country; being in AD-SEG-MAX is governed by the inmate’s actual behavior while in custody and has to be reviewed by a hearing board every 90 with actual proof of behavior warranting that level of confinement. But of course, for political prisoners the law and rules do not apply.

And none of this means that he can’t continue to run, and maybe even get elected. Democrats do it all the time.
Buddy Cianci.
Marion Barry.
Alcee Hastings.

Vladimir Putin, Xi Jingping, and other foreigners are neither threatening nor making moves to turn America into a fascist party state the Democratic Party is and I will not be told of the need to go on crusade against any foreign opponent from institutions like U.S. Intel or the FBI.

It’s too bad that Kelley wasn’t involved in the destruction of neighborhoods, businesses and cities across America, the attacks on law enforcement officers, the murders of innocents, and, the desecration of synagogues for almost the entirety of year 2020, as a member of the goose-stepping, terrorist-thug cadres of “Anti-fa” and “Black Lives Matter” — if he had been, the vile Dumb-o-crats would be lavishing him with plaudits and lionizing him as a “social justice” hero.

The coincidences keep piling up in Michigan. They really don’t want to turn over that state, probably because they are hiding something significant.

The filing of misdemeanor charges against Kelly coupled with the politicized FBI swooping for a perp walk and search of Kelly'[s house on the eve of the televised travesty was all part of the Democrats’ strategy of using J6 as a diversion away from their massive mistakes on all fronts.

If the governor is re-elected, Michigan will retain the mail-in ballots… which means there is no way a Republican wins the state in 2024.

“The unanimous Declaration of the thirteen united States of America, When in the Course of human events, it becomes necessary for one people to dissolve the political bands which have connected them with another, and to assume among the powers of the earth, the separate and equal station to which the Laws of Nature and of Nature’s God entitle them, a decent respect to the opinions of mankind requires that they should declare the causes which impel them to the separation.

We hold these truths to be self-evident, that all men are created equal, that they are endowed by their Creator with certain unalienable Rights, that among these are Life, Liberty and the pursuit of Happiness.–That to secure these rights, Governments are instituted among Men, deriving their just powers from the consent of the governed, –That whenever any Form of Government becomes destructive of these ends, it is the Right of the People to alter or to abolish it, and to institute new Government, laying its foundation on such principles and organizing its powers in such form, as to them shall seem most likely to effect their Safety and Happiness. Prudence, indeed, will dictate that Governments long established should not be changed for light and transient causes; and accordingly all experience hath shewn, that mankind are more disposed to suffer, while evils are sufferable, than to right themselves by abolishing the forms to which they are accustomed. But when a long train of abuses and usurpations, pursuing invariably the same Object evinces a design to reduce them under absolute Despotism, it is their right, it is their duty, to throw off such Government, and to provide new Guards for their future security.”

The FBI leaders that authorized the raid should be brought up on charges. They are interfering with a upcoming election.

The FBI is now the biggest threat to this country.

If only there was a riot but there was none.
How many Democrats got picked up in the BLM Summer riots that caused over $2 B in funded liability and another possible $1B in unfunded?

If I were a resident voter of Michigan, I would thank the FBI for picking the candidate For whom I would vote for me.

Just the other day the two lawyers who made, used and distributed molotov cocktails had their charges reduced to a max of 2 years despite the violent and destructive nature of their activities.

The fbi arrested everyone involved in 1/6 except the people who planned it, the guy who planted pipe bombs, and the guy who shot an unarmed woman.