Fauci Promises to Retire by 2024 “No Matter Who Is President”

Fauci Promises to Retire by 2024 “No Matter Who Is President”

Perhaps the most significant reason for the retirement is that Americans are no longer buying what Fauci is selling. 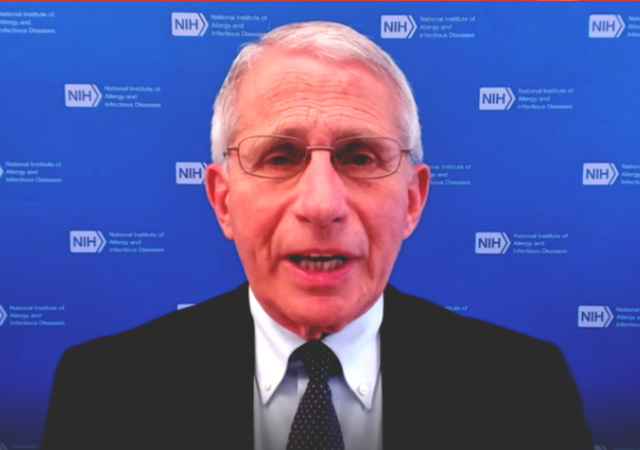 It looks like 2024 is already shaping up to be the best year this nation’s had in some time.

Dr Anthony Fauci bluntly said “no” when CNN’s Jim Acosta asked him during an interview on Sunday if he would want to stay on as the director of the National Institute of Allergies and Infectious Diseases in the event that voters gave Trump a second stint as president.

Fauci, 81, has led the institute since 1984, serving under seven presidents. He said he wasn’t confident in Trump’s ability to lead the country through a public health emergency like the coronavirus pandemic, and his administration’s response at the beginning of the crisis in early 2020 was “less than optimal”.

“If you look at the history of what the response was during the administration, I think at best you could say it wasn’t optimal,” Fauci said. “And I just think history will speak for itself. I don’t need to make any further comment about that – it’s not productive.”

I will note for the record Trump foolishly relied on “experts” like Fauci for guidance during the early phase. Fauci had a history of grandstanding, flip-flopping, and obfuscating during the covid pandemic response that I have chronicled at Legal Insurrection.

It appears that Fauci has been prevailed upon to expand his terms of retirement, and will be gone in 2024 . . . regardless of who is POTUS.

The country’s leading infectious disease expert made the announcement during an interview with Neil Cavuto on Wednesday when the Fox News anchor asked if he would continue serving in government if former President Donald Trump were reelected.

“Well, I’m not going to get involved in any politics about who is or is not going in the White House,” the doctor said.

“By the way, by the time that happens, I think I won’t be around, no matter who the president is,” he added.

Fauci currently serves both as Chief Medical Advisor to the President and the director of the National Institute of Allergy and Infectious Diseases [NIAID].

Cavuto asked him if that means he is “done.”

Perhaps the most significant reason for the retirement is that Americans are no longer buying what Fauci is selling. This is being noticed by those observing the response to the recent monkeypox outbreak.

While the U.S. has only confirmed one case of monkeypox so far amid the current rise, previous criticisms of Dr. Anthony Fauci may make it more difficult for him to lead certain segments of the public through a larger monkeypox outbreak, according to one expert.

Fauci, the chief medical adviser to the president and director of the National Institute of Allergy and Infectious Diseases (NIAID), became a household name in 2020 at the onset of the COVID-19 pandemic. But conservative media attacks and other factors, including criticism of masking and vaccination requirements, resulted in a gradual degradation of American confidence in Fauci.

As of April this year, for example, research from the Kaiser Family Foundation (KFF) found that more than half of adults, 53 percent, trust COVID-19 vaccine information from Fauci. But among Republicans, that figure is much lower. Between December 2020 and April 2022, the share of Republicans who said they trusted Fauci to provide reliable COVID-19 vaccine information fell from 47 percent to 25 percent.

The news is being celebrated across the nation, with suggestions he retire earlier.

Early retirement is fine. I'm sure he can afford to do it right now. pic.twitter.com/GwIeqevxqq

He should have been fired and jailed. This jerk helped fund this scourge, lied about it, then lead the charge to shutting down the entire GD planet, lying again all along the way.

But, no. He’s hoisted on the shoulders of the elite. We’re told to worship this fool.

You’ll notice in the last couple months suddenly everybody shut their mouths about Saint Fauci.

It’s almost like they realized how toxic the little troll actually is.

Not only that bit have you noticed no one in the media or in government even talks about COVID anymore? It’s as if it never happened.

These people are depraved and immoral.

Jailed? He should be hanged for his treasonous behavior in giving money to the Chinese to engineer a virus they released on the country and the world. He should then be drawn and quartered for coming up with the idea of locking down the US economy.

Getting out while the getting is good. Wants to retire before he is fired and might lose his pension.

Lose his pension – he deserves to lose his head!

He would retire today but he has a lot of shredding and file “cleaning” to do.

A few beagles he didn’t kill?

Owns a restaurant in SF

What is he waiting for? His next paycheck. He makes $425k a year, and I doubt he does much if any real work. If he hadn’t made himself a political figure he could have earned that absurd paycheck (albeit in obscurity) until he dies. Given that he’s 81 it’s far less than certain he makes it to 2024.

instrumental in one of (if not THE)greatest frauds ever perpetrated on this planet–from several recent studies (japan, UK, europe) appears the vax may have sterilized(or certainly inhibited child-bearing)in literally legions of karens and their daughters worldwide

but hey, the koolaid was great

It’s the single greatest fraud of all time.

1) I know I mentioned to another poster that this virus was engineered by China, but frankly I don’t think there ever was a virus. There’s no way to verify if there ever was a virus and the Chinese are not opening their mouths so I conclude it never existed.
2) At the beginning of this entire fiasco the Democrats downplayed the entire thing as just the flu and then Cybil-like they started acting like this virus was the most deadliest thing ever. It’s as if there was a command from DC higher-ups to weaponize this virus.
3) To this day we do not know who came up with the idea of social distancing and wearing masks to fight viruses. This entire stupid idea just up and entered the stream of consciousness as effective ways to fight viruses when prior to 2020 everyone would have scoffed at such silly superstitions.
4) Tony Fauci made out like a bandit with all kinds of donations and in-kind contributions despite being wrong on everything. Amd it warranted nary a curious look by any in the Leftist media. They just swallowed his load without question.
5) Locking down the economy was the greatest stupidity any country can do to itself. How is starving yourself and telling others to do the same supposed to stop a virus? The same is also true about locking the healthy in their homes.

I could go on, but I think that’s enough to show how this virus turned out to be the greatest fraud foisted on mankind. And the sad thing is these people ate going to get away with perpetrating this great evil. The only thing we can hope is that when they die they suffer immensely.

Those of us who had it can tell you there was a virus.
I think I’ve had the flu once, maybe twice, in my entire life. And then this one, which was not the same. Never lost my sense of taste before.

After two + years, my wife and I finally caught the damn virus, during my vacation. Believe me, it does exist, and the cure (Paxlovid) is worse.

Nope. Sorry you and your wife got sick, but the virus died the minute it became no longer politically tenable to hold it over people’s heads. It is no accident we no longer talk about the shit anymore.

No, you didn’t have the virus. You had the flu. You can also lose your taste and sense of smell with that too. It just goes to show that with enough convincing and conditioning people can be fooled into believing something even when there is no evidence to support it.

You have zero evidence to support this claim but insist on telling people what they did and didn’t have? What do all those tests measure then, secretly they measure the flu?? You’ve got a nothingburger here.

You’ve gone a little off the deep end, and when you do that, you affect the credibility of anyone who dares criticize the mighty regime. Please measure and level yourself off with facts and data first.

1) If an R is elected in 2024. he’d fire Fauci anyway.
2) If a D is elected, Fauci’s seat in hell would be too cold to sit in, so he’d have to spend his time making other arrangements.

Was he ever vaccinated?

I think we should bury him under 300 feet of concrete because deep down he’s a great guy.

Leaving aside that these hacks break solemn commitments all the time, he did not even commit to retiring if you read his words with any care.

Read RFK Jr.’s book. The F-man just wants to take the heat off for now and see which way the wind is blowing in a few years. He may be disgraced in some quarters, but he is still immensely powerful and his conniving mind is firing on all eight cylinders.

That’s a stinging indictment of how singularly awful this little troll actually actually is – we use RFK, Jr as a go to reference.

I did read the book. The Bride has a nephew who absolutely refuses to heed the fact that it has at least fifty references and some more than a hundred in the bibliography – for each chapter. He’s a Fauci worshipper, taken in by his “sincerity” and “superior knowledge,” his personal history be hanged. About three minutes into a conversation on the topic the nephew starts getting excited so there’s no further discussion possible.

I find it interesting that the younger of us has a closed mind while the older of us is open to new ideas. Shouldn’t it be the opposite? One more reason to fear for the future of the nation.
.

I have zero love for Fauci, but I have to be fair on a couple of things.

1. He did not make the political decisions that attempted to coerce vaccination on the population nor create the political climate of vaccine conformity that further divided the country. That was all Dems, Biden, and most significantly, the people behind Biden running this show.

2. The reason he has fallen out of favor is because he’s no longer needed. The virus has fizzled out because Omicron was the variant that did exactly what many experts predicted: make it highly transmissible with reduced lethality causing case reporting to drop due to low severity. This came much to the chagrin of the doomsday predictors.

Now, to his crimes:

1. Mask gate…he is 100% responsible for the bad messaging regarding masking

2. Vaccination and herd immunity. I don’t think epidemiologists can accurately predict the rate for achieving this conceptual benchmark. The US currently stands below 65 pct vaccinated and yet this “flattening” was achieved. If you don’t know, say you don’t know. Stop lying and admit it and help people make their own informed choices while speaking out against the coercive policies. You are supposed to be the scientific voice of reason.

3. I stopped listening to him at all in 2020 so I don’t have others, but I know there are many. As far as funding virology research in China, he doesn’t have the pull to make that call by himself. It’s a red herring.

Maybe he’s watching this case and is making preparations to get while the gettings good by the time this case is done.