“Israeli gas is expected to be sent to liquefaction plants in Egypt, then shipped north to markets in Europe.” 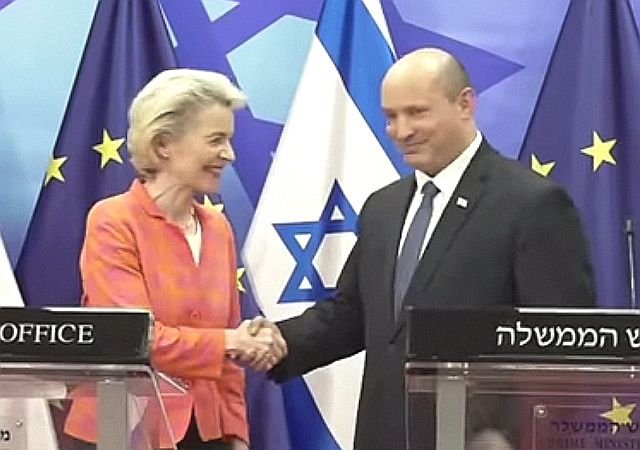 The European Union has signed a landmark agreement to import Israeli natural gas. Under the deal signed on Wednesday, the Israeli gas will be sent to a liquefaction plant in Egypt and then shipped to Europe.

The tripartite gas deal was signed at an energy summit in Cairo, Egypt. The agreement will allow “significant” exports of Israeli gas to Europe for the first time, Israel’s energy minister Karine Elharrar said.

Brussels will also promoted European investment in developing these gas fields. As part of the agreement, the “EU will encourage European companies to take part in searching for and producing natural gas in Israeli and Egyptian economic waters,” the Jerusalem Post noted.

The deal comes as Europe seeks to reduce its dependence on Russian energy supply in the wake of the Ukraine invasion. Currently around 45 percent of Europe’s gas imports come from Russia.

The European Union, Egypt and Israel on Wednesday signed a trilateral Memorandum of Understanding for the export of natural gas to European countries.

The deal which was signed in Cairo will help reduce the bloc’s energy dependence on Russia amid the Ukraine invasion. (…)

According to the memorandum, the three parties will work together to get a stable supply and delivery of natural gas to the European market.

“Natural gas from Israel, Egypt and other sources in the Eastern Mediterranean region will be shipped to Europe via Egypt’s LNG (liquid natural gas) export infrastructure,” the EU said in a statement.

This would be done in line with “long-term decarbonization objectives” and would be based on market-related prices, the EU said.

The EU would also help Egypt and Israel increase gas production and exploration in their respective territorial waters.

In a historic first, Israel 🇮🇱 will be cooperating with Egypt 🇪🇬 and the EU 🇪🇺 to provide natural gas to Europe.

We are proud to be contributing to global energy security and a more sustainable future. 🌱🌏 https://t.co/Eu7rM0EOJZ

The agreement allowing supply of Israeli gas was reached despite Biden administration’s efforts to kill a similar pipeline deal. Just weeks ahead of Russia’s invasion of Ukraine, the Biden State Department pulled the U.S. support away from the EastMed pipeline designed to deliver Israeli gas to the European market — reversing a Trump White House decision.

“Washington no longer supports the proposed EastMed gas pipeline from Israel to Europe, according to a Jerusalem diplomatic source,” the Israeli TV channel i24News reported January 19. “The Biden administration reportedly informed Israeli, Greek, and Cypriot officials in recent weeks of its change in attitude,” the news outlet added.

The Biden White House decision emboldened Russian President Vladimir Putin as he was amassing troops along the Ukrainian border, and further consolidated Moscow’s stranglehold on the Europe’s energy supply. It was only the shock of the Russia military offensive on the Europe’s eastern flank which forced the policymakers in Washington and Brussels to rethink energy security and look for ways to reduce dependence on Kremlin.

Hezbollah chief Hassan Nasrallah threatened Israel with war and destruction if the country proceeds with drilling off the coast of Haifa, the northern Israeli port city.

“The enemy must cease all activities in all parts of the field,” Nasrallah demanded. “The Lebanese losses in the event of war are nothing compared to what they will be on the side of the Israeli entity, and if there is a war it will have existential consequences for Israel,” the Hezbollah chief boasted.

The Lebanese government and Hezbollah have staked claim to the gas field, but recent satellite images confirm that the rig, currently under construction, is within the Israeli maritime borders.

Israel and Europe had a great agreement in place with President Trump’s approval and idiot Biden stepped in after and quashed it. Biden deserves a good swift kick in his arse but it would most likely kill him!

All the more reason to kick the pedophile in the ass.

I don’t think he could afford a head injury right now….. 😉

Hezbollah has declared war on Israel; now the Europeans have a stronger stake in preventing Iran/Persia from interrupting their gas flow (as far as you can throw/trust Brussels).
Will the Russians now back the mullahs? (just asking for a friend)

Don’t underestimate the ability of the Europeans to continue all efforts to destroy the Jews, even if it might impact their own countries.

This agreement is a year late but I’ll still take it! Let’s just hope this results in lower energy prices pretty fucking quickly!

Thanks for the report, Vijeta.

So far, it looks like a win, win, win situation.

Biden was bought off by Erdogan the Nutcase…And I have no doubt. None. That it was a Hunter Biden Bribe.
——————-
This is essential. I believe the gas fields are Cyprus-Israeli with Cyprus serving as a transport hub. Lines will run from the Israeli field back to Israel, and also to Cyprus. Egyptian gas will run the same way…back to Egypt and to Cyprus (Egypt already has a gas line to Israel). Egyptian gas can then add to the quantum. If they do this right, all the Greece, Italy,, the Greek major islands will be served, and if Cyprus can develop a LNG port, all of the minor islands as well. Hopefully lines can be extended to Croatia and Slovenia.
Who knows….maybe Gaza has a gas field.
But I assure you of one thing. When this becomes operational and if it is destroyed by Hezbollah? …Hezbollah will be killed to the last screaming woman. The world has had enough of Muslim fanatics…and only the Biden regime has tolerance for this behavior. Lebanon will find itself in a war that it always wanted and never had a chance of winning.

In the meantime, the damage being done to the US domestic energy industries is enormous and getting worse. This is a very complicated network of services that are easily disrupted by so many things, For a corrupt, senile ignoramus like Brandon to just issue edicts and threats crippling essential projects and shutting down production while ordering banks to halt any financing is criminal. Now he is blame the oil companies for not being patriotic?

That is why the stock markets are acting like the US is going out of business. We are heading for armageddon and fast. Brandon needs to be removed from office ASAP. He is insane. What’s the Chinese word for “insane”?