“And because I have a family with a lot of special needs kids. I have a brother who’s 57 and has the mental and motor skills of a 1-year-old. And I know what that means financially, emotionally, physically, for a family.” 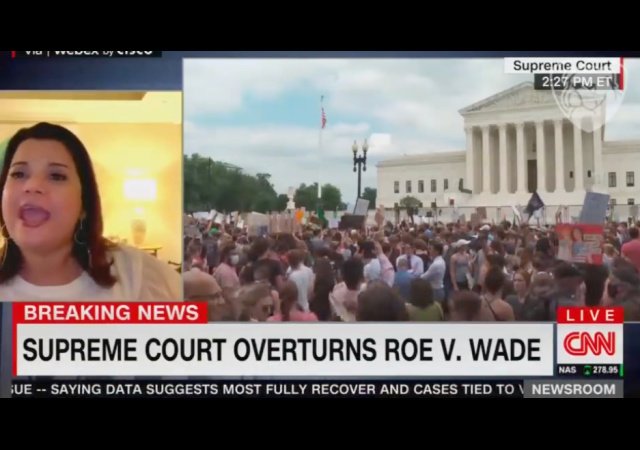 CNN’s Alisyn Camerota and Ana Navarro bully Republican strategist Alice Stewart because she explained how the country has a lot of pregnancy and infant crisis centers to help women and their babies before, during, and after birth.

But since everything might not go to plan. Instead of allowing Stewart to explain the massive amount of resources women can use they interrupt and speak over her.

Navarro uses her family members who have disabilities in her argument.

Evil. Pure freaking evil coming out of this woman’s mouth.

My mother raised me by herself during my first year. I was born with head trauma that left me with epilepsy and motor skills problems. Mom worked full-time while fitting in my doctor appointments, in-home nurse appointments, and physical therapy.

Navarro invokes her supposed Catholic faith I guess as a way to shield her from criticism. Lady, you cannot be Catholic and support abortion.

Before getting to Navarro’s ghoulishness, CNN’s Alisyn Camerota argues with Republican strategist Alice Stewart that the “something like 410,000” kids in foster care show the need for abortion. pic.twitter.com/sobdBq1Mgm

GHOULISH: CNN's faux "Republican" commentator and View co-host Ana Navarro cities her mentally handicapped brother, her STEP-grandaughter with Downs Syndrome, and her autistic STEP-grandson as reasons to have babies killed by abortionists.
What about their bodies and lives Ana? pic.twitter.com/N9M0mFaMDu

ALICE STEWART: I can tell you, having worked and advocated in the pro-life community for many years, there are crisis pregnancy centers set up across this country that are there to provide assistance, financial assistance, for expectant mothers.

ALISYN CAMEROTA (interrupting): Right, but I mean, after they’re born.

STEWART: Before, during, and after they have their child, whether they decide to put it up for adoption or they want to keep it themselves. There are services in place in the pro-life community that will help in this situation.

CAMEROTA: But Alice. Hold on. Let me just talk to you about that. There are something like 410,000 children in the foster care system right now in the U.S. So, clearly, they’re not all being adopted. And some of these babies will have obviously physical disabilities. I mean, what is the plan? Obviously, they’re not just all being taken care of currently.

ANA NAVARRO: And I am not anybody to tell you what you need to do with your life or with your uterus. And because I have a family with a lot of special needs kids. I have a brother who’s 57 and has the mental and motor skills of a 1-year-old. And I know what that means financially, emotionally, physically, for a family.

And I know not all families can do it and I have a step-granddaughter who was born with Down’s Syndrome and you know what? It is very difficult in Florida to get services. It is not as easy as it sounds on paper. And I’ve got another step-grandson who is very autistic, who has autism and it is –

And so, why can I be Catholic and still think this is a wrong decision? Because I’m American. I’m Catholic inside the church. I’m Catholic when it comes to me. But there’s a lot of Americans who are not Catholic, and are not Christian, and are not Baptist, and you have no damn right to tell them what they should do with their bodies. Nobody does.

So Ana Navarro is using her own disabilities to justify abortion? Sounds to me like her head trauma at birth has affected her ability to think logically. If only abortion had been available to her mother back then, the world would have been spared of having to listen to her utter nonsense.

But I have good news for Ana. It’s not too late have that post-natal abortion. SCOTUS allowed 30 days for their ruling to go into effect.

I think the author is the one who had head trauma/epilepsy. Navarro invoked her brother and two step-grandchildren.

Does Navarro still pretend to be a Republican? then again she is of upper class Nicaraguan stock which has much German in it

Remember when the establishment used to claim this fat bitch was a prominent conservative and was a ‘moderate’?

It’s pretty interesting how all of the so-called ‘moderate conservatives’ all turned out to be raging liberals.

The extremist positions, absolutism and in some cases malignant evil on full display today and in the days to come will provide a very informative picture for many people. As the initial furor dies and the dust settles people will seek to discover what the facts are in their State.

I suspect a large number will be surprised to learn that overturning Roe and Casey didn’t outlaw abortion but simply restored the question to the State legislature. Others will discover their State’s abortion stance didn’t change or that they find themselves in agreement with the modest limits in place in most States.

Fox reported some poll that about 2/3 of people thought today’s decision meant abortion was banned (a view encouraged by Democrats).

Navarro should have been asked, “So, are you saying that, because of your disabilities, you wish your mother had been able to kill you right after birth?”

The logical question would not be about abortion because that’s not her argument. Navarro is pushing a philosophy of eugenics buttressed by concerns about cost.

Either cost to society in the form of increased medical spending and basic needs are a legitimate factor in the debate about who should be killed for the ‘betterment’ of society or they are not. Which is it? That’s the argument she is making; who deserves to live and who doesn’t, it’s independent of abortion.

She continues to show her true side. An abomination.

“… you have no damn right to tell them what they should do with their bodies. Nobody does.”

And you have no damn right to decide to kill your your kid. It’s their body and you can’t take their choice to live away.

Your choice isn’t the one that matters here, you made that when you had sex and became pregnant.

That these two won’t be hounded off the air just shows how far we have sunk as a society.

Certainly there will be some special dispensation for aborting media defectives, abortion is essential to their social status.

Sounds like Ana “Don’t Call Me Late for Dinner” Navaro is the true mental deficient.

Look at the bright side, your brother is STILL more capable than the retarded pedophile in the white house.

Wow, Thanksgiving dinner at the Navarro household is going to be awkward this year.

When these people talk about their relatives this way, it really makes me wonder if these people even exist. It’s not like we can rely on the media to fact check. I bet that they just make them up along the way when necessary, or when screaming “racist” isn’t enough to win the argument. Since everyone in my fmilyline is fully intact, I guess that I have no future in politics.

It’s no secret in my family that I was an unplanned pregnancy, and that I had a significant physical disability. The disability was dealt with early on and is not an issue that affects me in any way as an adult. Life is good.

My parents believed that life was a delicate and precious thing to be cherished and protected, not something to be tossed aside for the sake of convenience.

I’m thankful every day for my mom and dad, as are my own daughter, and my grandchildren.

My wife had a religious uncle who had 7 children, the last of whom had Down’s Syndrome. For a long time he felt that God had cursed him. However, by the end of his life he had come to believe that he had been blessed. Few people get through life without being dealt a really bad hand along the way. It is what you do with it that matters.

Important safety tip: Never get between Ana Navarro and a buffet line.