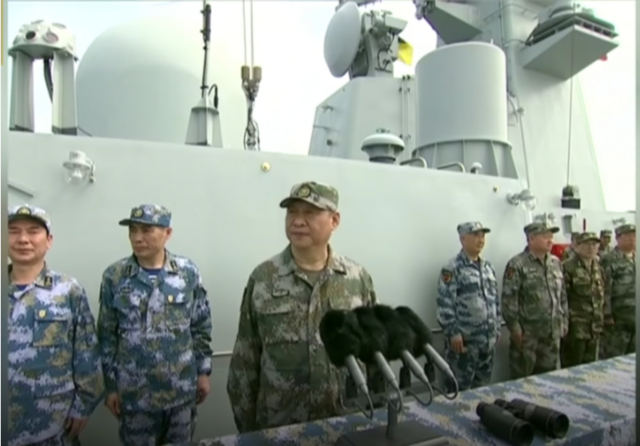 Just weeks after President Joe Biden pledged to keep Indo-Pacific “free and open” during his visit to Asia, China has reportedly began work on a naval base in the region.

China’s People’s Liberation Army (PLA) is constructing a secret naval outpost in the Southeast Asian nation of Cambodia, media reports say. “China plans to build a secret naval base in Cambodia as Beijing seeks to expand its military footprint among client states overseas and project its global power,” The Times of London reported Tuesday.

Reports indicate that the port project has clear military components to it. The Cambodian port of Ream “being constructed with the assistance of China will include a portion for the exclusive use of the Chinese military,” The UK newspaper Guardian noted, citing similar Western sources.

The Reuters reported the U.S. concern over the Chinese naval base:

A decision by Cambodia to expand its biggest naval base and allow the Chinese military exclusive use of a portion of it shows an extraordinary lack of transparency, a senior U.S. defense official said on Thursday.

A Chinese official said on Wednesday an “iron-clad partnership” with Cambodia was bolstered by military cooperation, as work began on a China-funded upgrade of Cambodia’s Ream naval base. (…)

The United States believes that the expansion plans for the base included exclusive use of the northern portion of the base for China’s military and neither country had shared full details about the extent of Beijing’s plans to have a unilateral military base there.

“The lack of transparency has been extraordinary…(it is) in direct contravention of months and months of denial by them that there was any PRC involvement,” the official, speaking on the condition of anonymity, said.

The official said the two countries had taken steps which were “bordering on the absurd” to hide Chinese military activity, including disguising Chinese personnel during visits by foreign officials to the base.

The Chinese “presence at Ream base on Gulf of Thailand would significantly expand its presence in Indo-Pacific,” the Guardian concluded. This, however, is not the first Chinese naval base overseas. The PLA has a naval base in the east African country of Djibouti. The Chinese navy is also reportedly operating from the secretive naval base in Pakistan’s Gwadar, a deep-sea port situated on the Arabian Sea.

In addition to expanding its global military footprint, China has built artificial islands in the South China Sea to operate as forward naval bases. These islands, which China started building under President Barack Obama’s watch, have been equipped with military bases, ports and airfields, that are fit to accommodate nuclear-capable bombers.

The growing Chinese naval expansion in the region threatens to reverse the geostrategic achievements attained during President Donald Trump’s tenure. In 2017, President Trump revived the “Quad,” a U.S.-led four-nation alliance comprising Australia, Japan, and India. The aim of the coalition was to contain China in the Indo-Pacific.

I’m glad I’m old with no kids. I never supported trade with China and still don’t. You all apparently do. Chickens are coming home to roost soon, hope it was worth it for your kids.

Ok. In the absence of the Chinese embedding spy chips in consumer goods, shouldn’t we prefer, pari passu, $80 tennis shoes to US shoes @ $100, take the $20 difference, and support some business in the local economy?

Then, suppose a $50 difference to spend at the local barbers’ shop, beauty salon, concrete men, lawn and garden, car repair?

I don’t know how long spy computer chip can survive in the 500*? Engine on my walk behind mower. Hell, I’d thank the Chinese, pari passu (somebody I know dated that girl once.) if they shipped their powered lawn mowers here for free.

Except they wouldn’t be free altogether, the longshoremen, the truck drivers, the folks taking inventories, what? $25/5 hp walk behind? $100/60 hp zero turn?

Small towns could get rich in that. And pay taxes to support the unemployed union members whose wages have been reducing nonunion pay by 15-20% for decades.

Obama’s third term is in overdrive:

The US Military Is Almost Completely Dependent On China For Key Mineral Used In Ammunition
https://dailycaller.com/2022/06/09/us-military-china-russia-ammunition-antimony-mining/

How do you hide a naval base from satellites?

The Chinese have a lot of ships. But only about 10% can travel over 1000 miles without refueling. (and that’s only if they are going slowly in a straight line.)

In order to protect their own sea lanes, they need to have some intermediate bases. Otherwise, even a small navy could interdict the imported food and fuel and bring China to it’s knees.

Are they using birthing or non-birthing carbon based entities?