Scientists scrambling to determine why and how monkeypox transmission has changed. 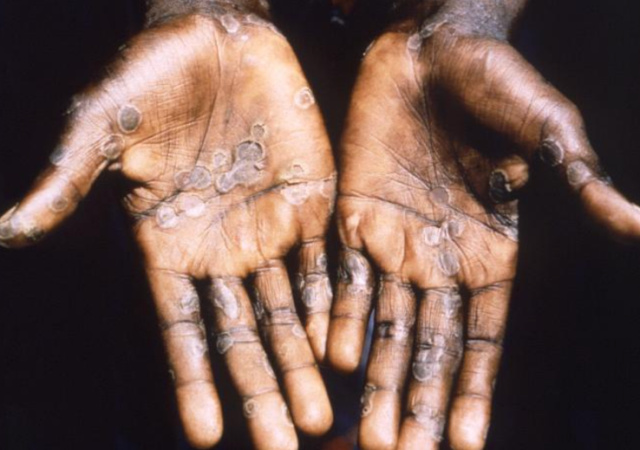 While members of the World Health Organization want to rename monkeypox, the Centers for Disease Control and Prevention have published new guidance, which includes how to have sex when infected with the virus.

Guidance from the Centers for Disease Control and Prevention (CDC) says anyone who has the disease must not have sex.

But for those who ignore the advice, the agency has published a list of the dos and donts under the bedsheets.

Among its tips was also to have sex while still fully-clothed, to ensure all rashes are covered and even to avoid kissing.

The odd guidance invoked New York City’s bizarre recommendation that sexually active people use “glory holes” during the coronavirus pandemic to prevent the spread of COVID-19.

A link to the guidance is here, for those of you who are pox-curious.

There are currently over 100 cases in the United States and 2100 worldwide. Scientists are scrambling to understand how this disease has suddenly become much more transmissible.

Given the unusual nature of the outbreak, scientists initially suspected that the virus may have mutated into a more transmissible form. However, genomic sequences studied from the outbreak don’t back this up, WIRED reported.

It was suggested that stopping the smallpox vaccination program led to a decline in immunity against orthopoxviruses like monkeypox. Increasing air travel post COVID could also helps virus spread. But this does not explain why the outbreak is happening now, Jo Walker, from the Yale School of Public Health, told the magazine.

“Maybe a random series of mutations in the last few months set this all off,” he said. “Or maybe our luck ran out, and it took until now for a monkeypox case to make its way to a major population center, get on an airplane, and kickstart an outbreak without hitting a dead end.”

There is also the question as to whether the virus can be sexually transmitted. Some, but not all, cases have also been linked to sex. Scientists are still researching this.

According to Reuters, researchers at Italy’s Spallanzani Institute have detected fragments of the monkeypox virus in semen from six of seven samples from monkeypox patients. One of these was found to be potentially capable of infecting another person. These results are extremely preliminary and should be taken with caution, however.

Personally, I am looking forward to an analysis of the monkeypox genome from this outbreak and contrast it with the genomes from previous ones.

What about wearing a mask? Doesn’t that protect against all possible infections of any kind?

I personally prefer the ones that go over your head with two eye lenses and a big canister over the nose.

Just when I thought my confidence in public health officials couldn’t possibly become any greater!

So much sciencing! If the CDC wanted to nuke their credibility on purpose, then they would have done little different than what they’ve done the last 2.5 years.

Could there be some variant of an insanity virus that has infected every liberal in the country?

So they are admitting that it is a gay problem? Just because 99% of people who’ve been infected are gay men they jump to conclusions?

The variable that’s gone unmentioned is covid vax status of those infected. The stuff appears to down-regulate immunity. If that correlates to increasing monkeypox cases, corporate media will take pains not to mention it.

The Clowns for Disease Control continue their show of intellectual bankruptcy. Who would ever trust them again?

Leslie, I’m betting it took most of a bottle of the strong stuff to write all that?

My love of gallows humor keeps me going at moments like this.

Has anyone considered a man just not having sex with other men?

I’m just surprised the CDC didn’t draw from the expertise of “The Naked Gun” movies. The bedroom scene between Leslie Nielsen and Priscilla Pressley was very instructional.

At least they thought to include “limit your number of sexual partners” somewhere in there. Like, at the very bottom, after their recommendation to have sex with your clothes on, and the one about wanking at each other from 6′ apart. They still didn’t have the guts to recommend monogamy specifically, though.

“wanking at each other”

I must have missed the guidance CDC published on how to be in the same hospital room with your dying parent or spouse when neither of you have COVID. Because I’m sure they must have cared super greatly about that.

Scientists are scrambling to understand how this disease has suddenly become much more transmissible.

Personally, I am looking forward to an analysis of the monkeypox genome

Never forget what they did to us.

When does DeSantis, Trump or the Ultra MAGA crowd get the blame?

It’s curable but too many infected live in the donkey pox bubble and never hear about the antidote (open mind and free speech).