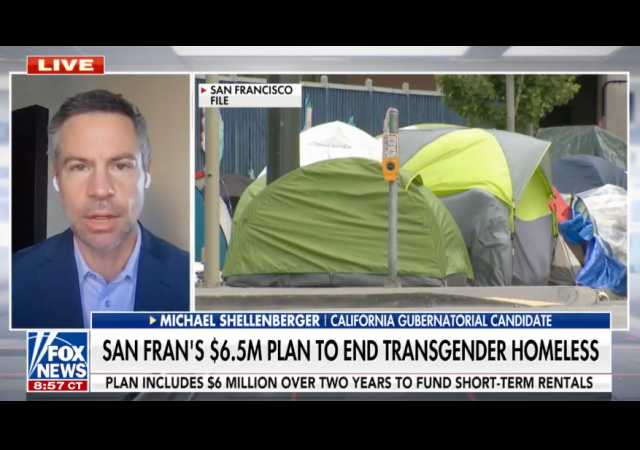 Breed has added a plan to her two-year budget proposal to end homelessness that would include transgender and gender nonconforming (TGNC) San Franciscans, a spokesperson for her office said. The mayor claims any such action would make SF the first city in the United States to commit to ending homelessness for TGNC people.

The mayor’s plan would create at least 150 long-term housing subsidies through the Flexible Housing Subsidy Pool (FHSP) program. A new permanent supportive housing site would also be acquired for trans youth with a focus on those at transition age. Breed would also earmark $6 million over two years for short-term rent subsidies, flexible financial assistance and support to build capacity among nonprofit providers. $500,000 would go to behavioral health services.

“Transgender, nonbinary and gender nonconforming people San Franciscans are 18 times more likely to experience homelessness compared to the general population,” said Breed. “And we know that the rates are even higher for our minority trans communities.”

The city estimates that there are roughly 400 TGNC residents experiencing homelessness at any given time in San Francisco.

“It’s not only totally unethical to discriminate against who gets shelter or medical treatment since the vast majority of homeless people on the streets are either addicted to hard drugs or suffering mental illness, it may be illegal,” Shellenberger told “America’s Newsroom.”

The rising homeless population proposes numerous problems for public health and safety both for individuals on the streets and residents of San Francisco. There has been little unanimity on how to address the worsening conditions for those on the streets.

“The underlying problem is that California is completely without leadership at every level of government,” Shellenberger claimed. “Gov. Gavin Newsom refuses to shut down the homeless encampments, which are open drug scenes.”

San Francisco has only spent $150 million of the $500 million from Prop C, which voters approved in 2018 to help the homeless.

Prop C is a “business tax that voters approved to make massive investments in homeless services.”

So Breed said transgender people are 18 times more likely to be homeless.

So that means if San Francisco helps out the transgender homeless, the city will still have 7,354 homeless people.

What an absurd woke, pandering fail.

Gee, I wonder what will happen to the number of “trans” hobos when they start handing out free shit to trans hobos?

One of the big problems with the “homeless problem” is that a very large percentage of them don’t WANT help. If you’ve only got enough money to help some of them, why not focus on the ones who actually want help, instead of just the ones who are so drug addled you can convince them they want to cut their genitals off?

Start with the crazy, a good idea. That’s 40% of the homeless.

That’s similar to politicians—except the number is around 80%

Crazy is the very foundation of the left

If you don’t, your fate is yours

Enough let’s take back the Country

Mr. Shellenberger is not on my side of the aisle by any means but he speaks reason as I heard him on Joe Rogan. I sent him $10 because he has actual plans to attack the problems.

A plan to attack the problem? Simple: stop funding this crap.

You get more of what you pay for. So stop. You’ll get less. A lot less.

Charity that works is invariably built around the idea of exchange, not around handouts: we give you something but expect something from you, too.

Whenever a charity finds its working harder to rehab someone than that person is working to rehab themselves it’s time to step back and asses whether your work is just creating dependency and thus actually working against the best interests of the recipient.

Government programs should not discriminate

Those of us who live in Calif (we comprise at least 10% of the entire US population) must vote for Shellenberger in the upcoming primary election so that he can oppose the incumbent in November. I don’t care what side of the aisle he’s on, but we need to break the SF mafia’s lock on this entire state. The current governor is the nephew of Nancy Pelosi, and the entire state leadership comes from the SF Democrat cabal. Vote your ballot and send in if you haven’t already done so !

Only 400 SF homeless NOW fall under the transgender category. Once they start giving them houses there will be more “transgenders” than gays in SF.

In particular, the gays will become “transgenders,” along with the straight male rapists, the drug addicts…

The whole city will look like drag time story hour at the local elementary schools.