Branco Cartoon – A Jury Of His Peers

Branco Cartoon – A Jury Of His Peers 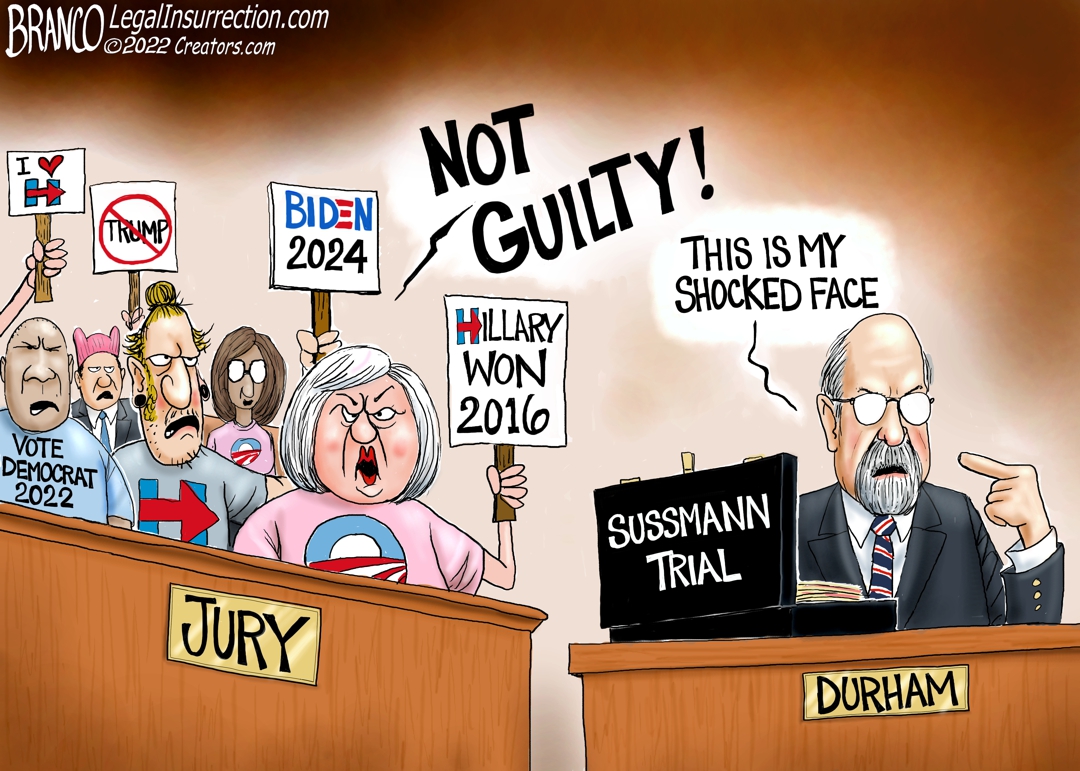 I am starting to almost respect Durham. (almost)

That said, he had to know he was playing against both a stacked deck and a S&W.

I hope he had an alternate plan.

Respect? Respect?!?? How in the heck can you respect a man who took three years in a so-called “investigation” where in the end he only has managed to indict a low-level, Clinton campaign legal advisor for lying to the FBI (seems to be a theme these days) and then totally screws the pooch at trial and doesn’t even get a conviction. You can’t respect such a person. Nor will I.

When Durham finally manages to indict Hillary Clinton (not likely but it could happen) and drags her sorry ass into court and forces her to testify under oath and penalty of perjury to her illegal acts and actions and gets a conviction then, and only then, will I consider “respecting” Durham. But until then I don’t want to hear about it. Not at all.

I see you missed the “ALMOST” part.

I’ll explain why I am “on the fence” to a degree.

In the beginning, I felt Durham was a DS operator along the order of Barr and this would never even see the light of day and initially just wrote it off- just the fact it went this far caused me to re-look with a more critical eye.

The fact something actually happened can be legit just as it can be a false flag for photo op purposes too- I’m looking at it from both views. (I’m about 51-49 in favor of legitimacy but that’s not a margin wide enough for me to defend or try to sell at the moment)

On some key points, let me elaborate;

Taking 3 years- we don’t know how many roadblocks, delaying actions and other investigative research he had thrown in front of him. I can speak from experience that “time” isn’t the factor people think it is- its the amount of obfuscation/hiding/stalling the adverse side does that rules the timeline.

Indicting low levels- it is a common practice to build a case like stairs because often you need smaller victories ( and their gained information) to win larger ones . (not unlike island hopping in WWII)

Screwing the pooch- That’s undoubtedly correct in outcome but incorrect in phrasing the question. It would be better asked: “Did Durham set out to win and the Judge screwed him or was he practicing political kabuki for the benefit of the audience to say “he tried”. I’m 51-49 in favor of him trying but not enough to defend that position with the available information.

Respecting Durham- I certainly understand your position (I hold it myself) but I guess I look at it differently based on experience. There are a lot of people I want to see “just a swinging” from the end of a rope but that level of legitimate justice takes a lot of time and these people will not go quietly and have MASSIVE resources to launch both active and passive defenses.

Durham and Barr should both be hanging from a lamp post on Pennsylvania Ave. His job, and his only job, was to insulate The Swamp. He did it masterfully.

He took forever to “show” what everybody knew three years ago.
He brought an indictment against a minor player with a specious charge.
He didn’t even investigate, let alone charge anybody from the FBI or the DNC.

The FBI was in on this from day one, hell, they have an office at his law firm. Had he been convicted he’d be repaid handsomely for being a team player, he wouldn’t have even lost his law license. We have precedent for that. He was not convicted, shocker, and now all major players can point and say, “Nothing to see here.”

I wouldn’t piss on Durham if he was on fire and I’d be happy to set the worthless, treasonous bastard on fire.

I don’t disagree on Barr at all but lets not throw them all in the same bucket.

I take it you have never actually investigated a crime in order to bring charges that will actually win in court?

>>>He took forever to “show” what everybody knew three years ago.

That’s easy to say from the couch. I don’t know who “everybody” is or what they allegedly “know” but I do know what it takes to get and vet evidence that will stand both rules of evidence but vigorous cross examination and 3 years in a case as charged as this is hardly “forever”.

>>>He brought an indictment against a minor player with a specious charge.

He had the proof so don’t see how specious applies. He made a charge based on the evidence he had in his hand. Would you rather he make stuff up like the J6? How do you know the indictments are finished?

>>>He didn’t even investigate, let alone charge anybody from the FBI or the DNC.

I’m curious, you know this how exactly?

>>>The FBI was in on this from day one, hell, they have an office at his law firm.

Exactly what “this” were they in on? ( need a specific charge in the code and evidence to support it before charges go forth) Since I agree the FBI is “complicit”- just imaging how much obfuscation and obstruction they did to keep Durham from finding and vetting evidence.

If you had ever actually investigated something, you would see the immediate difficulty. This doesn’t go like it does on TV.

>>>Had he been convicted he’d be repaid handsomely for being a team player, he wouldn’t have even lost his law license. We have precedent for that. He was not convicted, shocker, and now all major players can point and say, “Nothing to see here.”

Speculation calling for a conclusion. (I personally agree with your assessment but its still speculation even though we both came to the same hypothetical conclusion)

>>>I wouldn’t piss on Durham if he was on fire and I’d be happy to set the worthless, treasonous bastard on fire.

I don’t disagree nor agree. I’ll wait to see how this goes before I pass judgment. I may spring for the gas

Yep, he didn’t want to ‘commit suicide’ w/two bullet holes to the back of the head.

You’d have to be suicidal to vote to convict anyone even remotely connected to the Clintons.

Durham had to know this verdict was the likely outcome. Either he’s a fool or going forward with the trial it was a chess move on his part. Hopefully he’s thinking many moves ahead.

I’m curious. Although the trial ended in acquittal, a great deal of incriminating information about people other than Sussman is now in the public record as a result.

Seems to me that can now be used to pursue those other people, and get convictions or, if not, get still more incriminating revelations on the record to use in still more indictments and trials.

If Hillary Clinton went to prison, who would complain about Sussman going free?

I “hope” Durham used this case as the proverbial “canary” to see exactly what he is up against and ferret them out for more higher priority people.

He did succeed in putting a lot of stuff out there so now we will probably see if he is really serious or was just dancing Kabuki.

Very scary stuff. Our government is a Mafia, and we ain’t in it.

i WOULD VOTE FOR “CANKLES clinton” TO HANG…NOW