Invoking the Defense Production Act is an abuse of power. 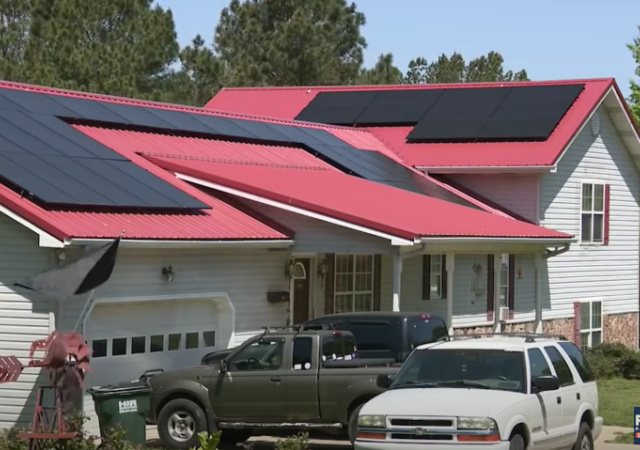 President Joe Biden invoked the Defense Production Act to boost the production of solar panels in America because out of everything citizens need that is obviously the most in-demand.

Oh, how I love it when the government picks winners and losers. It always turns out so well, especially solar panels!

Yes, Biden does something similar to Obama…again.

Biden also has no justification to invoke the Defense Production Act: “The Defense Production Act is the primary source of presidential authorities to expedite and expand the supply of materials and services from the U.S. industrial base needed to promote the national defense. DPA authorities are available to support: emergency preparedness activities conducted pursuant to title VI of the Stafford Act; protection or restoration of critical infrastructure; and efforts to prevent, reduce vulnerability to, minimize damage from, and recover from acts of terrorism within the United States.”

Biden’s explanation for using the DPA does not match the criteria:

Specifically, the President is authorizing the Department of Energy to use the DPA to rapidly expand American manufacturing of five critical clean energy technologies:

In deploying the DPA, the Biden-Harris Administration will strongly encourage the use of strong labor standards, including project labor agreements and community benefits agreements that offer wages at or above the prevailing rate and include local hire provisions. The Administration also will strongly encourage projects with environmental justice outcomes that empower the clean energy transition in low-income communities historically overburdened by legacy pollution.

Following this announcement, the White House and the Department of Energy will convene relevant industry, labor, environmental justice, and other key stakeholders as we maximize the impact of the DPA tools made available by President Biden’s actions and strengthen domestic clean energy manufacturing.

Even Press Secretary Karine Jean-Pierre could not explain why Biden invoked the DPA. Could it be because there is no valid reason to invoke it for this matter?

"What's the real emergency in the solar industry?" pic.twitter.com/RmZeUpshvh

North Korea’s leader is Rocket Man. Ours is Solar Man

In fact, Biden loves solar so much he transitioned to a solar powered brain but, due to the fact that he hasn’t been out in the sunshine for more than 5 minutes over the past two years, it is non-functioning.

Non-funtioning—-which is where our nation will be if we continue in the direction Biden is taking us.

The “illusion” of doing something while raiding more money to friends who bribe them.

Feverishly working out a plan to scam me some of that money.
Because actually creating actual solar panels will not at all be a prerequisite, and you know it.
I mean, how many times can you watch the same movie and be surprised by the ending?

The microwave space drive favored by Instapundit is the way to go. If it works, then you can build a perpetual motion machine with it.

“If it works, then you can build a perpetual motion machine with it.”

“perpetual motion machine” Then it will not work.

All the way to the bank.

In business, we couldn’t change anything without convening a process/quality improvement team the goal of which was a comprehensive cost/benefit analysis with consensus and buy-in from all who were affected.

I’m sure America will be as cooperative and grateful of Biden’s forced changes as my former co-workers were with management edicts.

LG just shut down a solar panel facility in Huntsville due to lack of ability to source the required materials at a reasonable price point. They had a trained workforce and and a running plant. The required inputs were too costly for them to be able to pass along the costs of production and make a profit. The market wouldn’t bear the price largely because they couldn’t set a price due to insane increases in their costs and inability to secure this inputs.

The silver lining is there is still plenty of coal left in the earth and enough oil to last for the next 10,000 years.

Last year was a boom year for coal production in Wyoming despite the wind and solar lobby, along with their Democrat shills, saying coal is being depleted and on the downturn. Dems in Colorado are shuttering reliable, clean coal-fired power generation plants and replacing said energy production with fully unreliable wind and solar idiocy.

This is forced without merit…typical of the moronic left.

That and maybe the prices will drop and we can afford an off grid alternative which given the state of things isn’t a bad idea.

If the prices drop my goose will lay a golden fleece.

Solar panel costs per watt and power density have been steadily improving, the same is true for LiFePo4 batteries. Solar power and storage is economical now. Also keep in mind that batteries are not the only storage options, for air conditioning, freezing water for chilled water is viable and currently widely used by industry. There are also several newer battery chemistries coming, and those will improve economics even more.

I am a big believer in being self sufficient, getting rid of power bills appeals to me.

In the words of Captain America……..I got that reference!

Those horrible ghastly contraptions on people’s roofs do nothing for “the planet”. They insult the eye, don’t work at night or on cloudy days, and those unfortunate enough to have fallen for the “free electricity” scam soon find out it wasn’t as advertised.
Nuclear power has served our military for decades (submarines and surface sips) and if states would only get up to date and acknowledge that the U.S. nuclear industry is not the Soviet Union’s Chernobyl, we could have unlimited energy production for centuries to come.
Open the waste-deposit site in Yucca Mountain Nevada.
Europe, who leftists seem to revere, have no problem with reprocessing nuclear waste for energy.

Europe is shutting down its reactors too in service of green insanity.

what is even more insane is Britain, Germany, and Australia are cutting down pristine forest to install wind mills to general electricity

There are still quite a few trees in the Black Forest of Germany while Belleau Wood has less and the Argonne is gone.

Yes we really do need as a society to get over some of our hang ups over nuclear and reembrace it as the best means of powering our nation long into the future.

I agree, nuclear energy is the only viable means of supporting heavy industry. We have suitcase nukes for two legged varmints, I would .love to see a power plant suitable for personal use.

IMO the press secretary can’t explain anything and seems barely a step faster than Biden. Therefore, I would not draw any conclusions on her lack of solar power info.

They are considering asking if Biden could come out and explain what the hell she just said.

This is the bitter pill of Affirmative BS.

Americans: Those gas prices are killing us! Can you do something to lower those prices, Brandon, I mean President Biden?

Brandon: Sure! We are going to increase solar panel production and ilremove tariffs on countries who hate America as much as I do to get working Americans back to work.

Americans: Uh, how is that going to lower gas prices?

If as president you were trying to destroy the USA what would you do differently?

Point your shotgun at them, and say, “this is not an assault.”

There are a lot of frauds using solar as cover to fleece people, they would do so with or without solar.

“Even Press Secretary Karine Jean-Pierre could not explain why Biden invoked the DPA.”
I can.
It’s the Executive Branch’s analog to the Commerce Clause.
Invoke it, and it’s a backdoor hack to everything else in the Constitution.
So can I be Brandon’s press secretary now?
I’ll even become a lesbian if I must.

So, where is the Republican party to call Biden out on this abuse of power? Nowhere to be found as usual. The Reps are such a waste of time, money and resources.

No way these 4 Asian neighbors of China won’t be used to scam export Chinese solar junk free of tariffs…nope, not a chance at all.

You have to be an idiot to fall for this crap, and a decent Congress would draft articles of impeachment on this crooked deal.

So which Chinese Communist Party owned company will be dumping “solar panels” on the US as a result of this?

Work, play, sleep. Sleep! Lithium batteries and others are environmental hazards throughout their lifetime from resource recovery to processing to reclamation. Go Green with lowered expectations, environmental blight, and renewable profits.

Biden’s explanation for using the DPA does not match the criteria:

The only criteria the left have is the federal government taking over all means of production.