As with all failure-ridden Biden-era-proposals, this one is loaded with unintended consequences 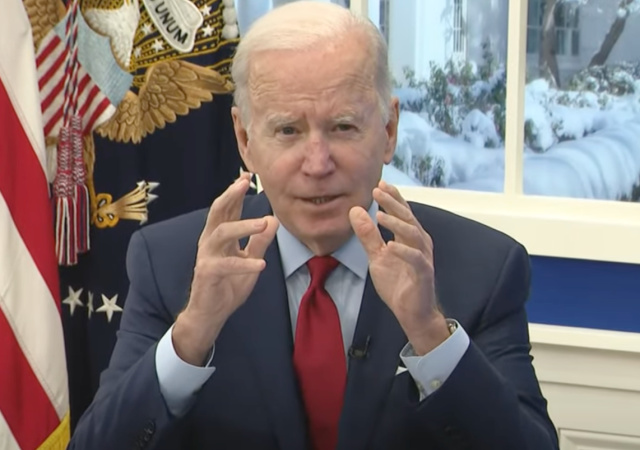 Proving that there is no aspect of life that the bungling bureaucrats in the Biden administration can’t over-regulate, there are now plans to force cigarette companies to reduce the level of nicotine in their products.

The Biden administration is moving forward on a plan to mandate the elimination of nearly all nicotine in cigarettes, a policy that would upend the $95 billion U.S. cigarette industry and, health officials say, prompt millions of people to quit smoking.

The plan, unveiled Tuesday as part of the administration’s agenda of regulatory actions, likely wouldn’t take effect for several years. The Food and Drug Administration plans to publish a proposed rule in May 2023. Then it would invite public comments before publishing a final rule. Tobacco companies could then sue, which could further delay the policy’s implementation.

…The policy would apply to all cigarettes sold in the U.S. Imports of traditional cigarettes would be barred but multinational tobacco companies could continue to sell full-nicotine cigarettes in other countries. New Zealand’s Ministry of Health also has proposed a reduction of nicotine in cigarettes to very low levels as part of a broader plan to curb smoking.

However, there is a long way to go before this inane proposal becomes a final rule.

The decision to pursue a policy to lower nicotine levels marks the first step in a lengthy process, and success is not assured. It could take at least a year for the Food and Drug Administration, which regulates cigarettes, to issue a proposed rule, experts say. After that, the FDA would have to sift through comments from the public before issuing a final rule.

Opposition could delay or derail the effort — especially if the regulation was not completed before Biden left office. A president elected in 2024 could tell the FDA to stop work on an unfinished rule. The tobacco industry, which is sure to be fiercely opposed to such a drastic change in its products, could challenge a final regulation in court.

The proposed rule is set to be published in May 2023. In fact, when one actually reads the intended rules, it appears that most cigarettes would be banned in the United States.

One critic compared the idea to alcohol prohibition, especially when combined with the FDA seeking a ban on menthol-flavored cigarettes.

“In practical terms, the proposal would ban most cigarettes currently sold in America,” Guy Bentley, director of consumer freedom at the libertarian Reason Foundation, told the newspaper.

And as with all failure-ridden Biden-era-proposals, this one is loaded with unintended consequences.

Richard Marianos, a 27-year veteran of the Bureau of Alcohol, Tobacco, Firearms, and Explosives, said these regulations will shift the demand for cigarettes toward unregulated tobacco grown internationally, which is then purchased and sold by drug dealers.

“The problem again with this administration is they do not take into consideration a totality of subject matter experts,” Marianos told the Washington Free Beacon. “I’ve never seen this much foolishness in my life.”

Marianos, who worked on gang violence at the ATF, said the black market for cigarettes is dominated by street gangs and would grow at least a hundredfold after the FDA implements its nicotine decision. He claims one of his former informants discovered some dealers make $5,000 selling cigarettes in a single afternoon. The FDA’s “uneducated and silly” cigarette plan, he said, would require law enforcement to focus on tobacco sales rather than drugs and violent crime.

Nobody doubts the serious health effects associated with smoking. However, consumers who use this product are fully warned of its dangers…starting at a very early age. There is a reason those who smoke do so, despite the warning ans the myriad of rules where they may do so.

Perhaps Biden’s next move will the reduce the level of caffeine in coffee, alcohol in beer, and joy in life?

From the same Admin that sent out crack pipes….

It isn’t about harm reduction or health it’s about control of peoples lives. Consider the water flow restrictive on showers and size of toilet tanks or the simple lightbulb. You don’t get to make your own decisions, the bureaucracy will do the thinking for you.

President. Burden, one hairy-limbed dog and one small pony.

Dang, somebody put some Worcester on that for me. I’m too busy writing an elegant piece reviewing Baude’s podcast where Professor Bridges, the star, claims CRT can support CLT only if people of interest hold law degrees.

They view us as stupid and incapable of making correct decisions.

I disagree. I believe they know the opposite to be true and that annoys and frightens them so they find ever expansive ways to insert govt bureaucrats into the minutia of daily life.

They can’t help themselves. The country is burning but the agenda calls for playing the fiddle, therefore they must play the fiddle. Nothing else matters.

Is nicotine artificially added to cigarettes?

Yes. And the manufacturers don’t want you to know that.

To top it off, there is a push to make nicotine vaping fluid illegal, because of course it is not a revenue item for the Feds so wiping out the vape market will drive more smokers to the taxed cigs market. The black market vaping fluid market is going to go wild, and the cartels will be able to make big bucks.

More cigs to get the fix…. yep.. for cost …more tax revenue.

Precisely! If our overlords were truly concerned about nicotine levels they would outlaw tobacco products; but that would eliminate an ass-load of tax revenue.

An odd choice of places to keep the revenue. I use a wallet or a small cashbox.

Enclose a nicotine patch with every cigarette.

As an ex-smoker I can say with authority that the only way those things ever helped is if you rolled them up and smoked them.

There’s indication that nicotine may be protective against covid – so it’s little wonder the Biden regime is keen to reduce it in cigs.

I was surprised to learn that these companies don’t just dry and chop up tobacco and roll it into cigarettes. They add chemicals, including a lot of nicotine. So you get more of a buzz or lift from a commercial cigarette than a cigar or pipe, or from roll-your-own cigarettes.

Yeah that’s addictive. And the cigarette companies don’t mention it, ever!

I’d maybe support letting them continue it, as long as there’s something like “nicotine added” prominently on the label. But back 40 or 50 years ago when I learned this, I remember thinking those tobacco companies are cheating.

I can’t speak to previous generations but for Gen X we knew the dangers re addiction. Adults get to make their own choices. Children don’t. The govt needs to back off and let people decide for themselves re cigarettes and a great many other things.

I am proudly pre-boomer. War (WWII) baby. We smoked, and were fully aware of the problems. They were called, among rednecks, cancer sticks, coffin nails.
The idea that the surgeon general revealed anything in 1965 is pure bunk. The dangers have been known since the beginning, almost.

After that, the FDA would have to sift through comments from the public before issuing a final rule.

Public comment periods don’t seem to matter much to Biden’s agencies, there are a number of pending lawsuits on the matter.

Right- they had no problem bypassing that rule for the so-called “vaccines”. They do as their told by their paymasters.

I am very confused as to why the government wants to regulate speed boats by removing nictone from them. Is nicotine a component of fiberglass? But then why speed boats and not all the other pleasure craft?

It went over your head. As did it mine on first reading.

It was indeed silly but I decided it was actually a valid response given how silly it is every time the government tries this sort of intervention. But I also love Cigarette Racing so I saw an opening there!

I thought it was a good play on words. One of the many maladies going around these days is a lack of humor.
Thanks for the chuckle.

If the Biden admin wants a winning regulatory action, they should restore toilet paper to 4-1/2″ wide.

But crack piles are distributed tax-free by our Imperial Federal Government.