One economist’s assessment of the American baby formula supply:”‘I haven’t seen an industry this fragile.” 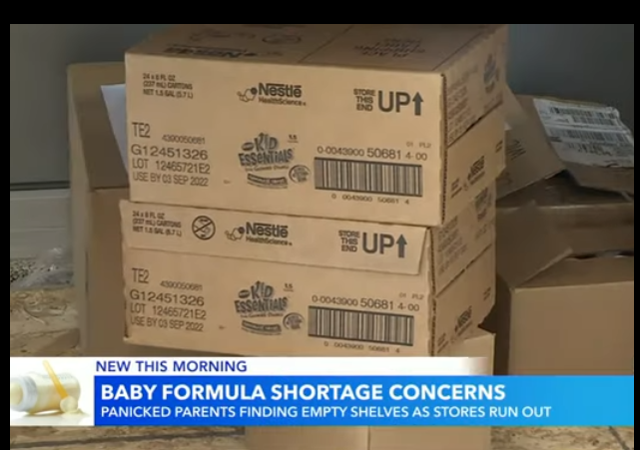 Baby formula production in the country took another hit this week. A powerful storm slammed Michigan and other states earlier this week and flooded an essential baby formula manufacturing plant in Michigan.

The announcement from Abbott Laboratories came after the monthslong closure of the same plant in Sturgis prompted a severe shortage in formula products across the United States. Production of EleCare and other specialty and metabolic formulas had restarted at the Sturgis plant on June 4.

In a statement Wednesday, the company said it stopped production of EleCare after a torrential storms overwhelmed the city’s stormwater system and flooded parts of the plant.

In a statement Wednesday, the company said it stopped production of EleCare after a torrential storms overwhelmed the city’s stormwater system and flooded parts of the plant.

The plant’s production will be impacted for weeks due to the flood, as indicated by the official Abbott statement. The reason: The facility needs to be cleaned, sanitized, and get a thumbs-up from the Food and Drug Administration (FDA).

“As a result, Abbott has stopped production of its EleCare specialty formula that was underway to assess damage caused by the storm and clean and re-sanitize the plant. We have informed FDA and will conduct comprehensive testing in conjunction with the independent third party to ensure the plant is safe to resume production. This will likely delay production and distribution of new product for a few weeks.”

In tweets Wednesday night, US Food and Drug Administration Commissioner Dr. Robert Califf said, “We know Abbott is working quickly to assess the damage and will be reporting its progress to us in the days ahead. Once the company establishes a plan, FDA will be back in the facility working to ensure that they can restart producing safe and quality formula products quickly.”

During a US Senate hearing, a Cato Institute economist had the following assessment: I haven’t seen an industry this fragile.

“I’ve been looking at supply chains for the last two plus years…and I haven’t seen an industry this fragile,” Lincicome said. “It is about a textbook case of what happens when you put walls around the country and block all the imports, and then have a government contractor as a monopsonist in the market… it’s a perfect storm for problems.”

President Biden’s photo ops and airlifts are “a band-aid on a flesh wound.” – Scott Lincicome

The baby formula shortage could have been prevented. pic.twitter.com/4rS6PXdMgF

Stay tuned. There are likely to be more competitors for the title of “most fragile industry” during Biden’s administration.

Many plants stall when unusual floods hit and due to HACCP concerns, any food and drug facility has an enormous decontamination and start-up protocol in this type of situation.

Granted, the situation and timing makes it worse but as a single issue, this is routine as far as the incident goes.

This article identifies ( in a very soft way) the real true issue. As an Expat, I have seen this myself and screamed it from the highest points.

Let me tell the board the truth.

The “big lie” is that there is “cheap labor” overseas and that’s the cause of all our ills- that’s bogus but its a politically created smokescreen used by BOTH SIDES to conceal the truth.

It is the truth labor is cheaper in almost every other country but in the entire ledger, labor is but a fraction of COGS and “overhead” going not only into the product ( production) but also the costs of maintaining a business. (compliance to OSHA, EPA, Insurance, Unions and the list goes on).

The reason we are facing shortages (and why businesses sell out across the pond) is they we have “legislated” one of the overall most business UNFRIENDLY environments there is.

I hear this from every client and have been in the position to compare CONUS and OCONUS data and its clear and evident.

Its more “profitable” over there because they don’t have to comply with all the “political” permits, impact studies, EPA, OSHA, Health Insurance, and everything else we do. ( remember all that COVID testing had to be purchased/ thermometers, additional people and so forth)

That’s not to say regulations are evil or bad ( many are necessary) but the overwhelming majority are political and go into pockets or appease special interests rather than do what the intent was.

And honestly, this is more a globalist/RINO issue in terms of fault and responsibility than the left overall but the left is a close second.

Remember, a business WILL pass this all to the end user and they WILL move where the cost is lower. Blaming salaries is a red herring to cover up the truth.

Now you know how all the politicians on a USG salary became millionaires.

And we are going to pay dearly for it.

Regulation nation. It’s also like all the infrastructure spending, they can approve money for every project known to man but in many cases it can take over a decade to get a project underway let alone completed due to all the red tape involved,

I doubt the Empire State Building or (my favorite) the Chrysler Building could even be built today, even if the blueprints and designs were brought to 21st century codes.

Had it not been for the Brandon pedophile administration FDA’s previous incompetence, this would be a minor blip on the market. However, because the pedophile-in-chief and retards at his FDA ARE completely incompetent and already caused a huge shortage that has barely started being recovered from, this is another major problem. Now stop trying to apologize for the retarded pedophile in the white house, there’s no excuse for such incompetence and stupidity.

Right. For an industry which is “so incredibly fragile,” it seemed to be operating perfectly hitch-free for the 75 years Before Brandon.

First, I don’t know how you could possibly get the idea I’m apologizing for Brandon- I am not and never have.

Second, there is nothing stupid or incompetent about this. Dont buy the lie. This is a well planned, controlled, precision executed and managed destruction of the US economy then society with the end goal to subjugate us to the left’s version of socialism.

Most if not all of these regulations are unnecessary. Ordinary product liability law should be sufficient to give consumers as much safety as they prefer. And it would let them decide the trade-offs to make between safety and other values.

I’m talking about OSHA and all the “safe work practices” and EPA (controlled disposal) and a long list of them. None which directly touch the product.

A rather large percentage of the population is too dumb to make good decisions., that is why we have the current situation. They are Hillary’s flock of deplorables.

On a follow-up note, if you ever want to know why the RINO establishment was dead set on sabotaging Trump and making MAGA go away ( with their faux conservatism line)

That cut into the Turtle’s, Rove’s, Romney’s and all the other sellouts numbers and the Chinese told them to get rid of Trump any way possible.

The second “big lie” is corporate taxes. ( and the lie about not paying any)

That’s beyond the scope of a single post ( ask a CPA and get a class in how this works) but:

“Taxes” are paid on PROFIT ( what’s left) which is what’s left after all things are paid. ( and that final profit can be manipulated and is every day)

The regulations ( and their costs to the business) are paid first and in the P&L and balance sheet and charts of accounts so they are “invisible” without a breakdown. Some of the costs are intangible such as “effort hours” to comply with new processes, training and what not.

None of this is “free” and the cost is posted somewhere in the accounts and charged accordingly.

What’s left after all of that is what they pay taxes on.

So, the Musk’s and all of them “may” pay little to no taxes on their business ( depending on the profit they show) but you can BET they paid all the fees associated with getting there. They had to otherwise they couldnt operate.

Another point, all taxes are passed on to consumers. This is why I advocate self-sufficiency, because a huge amount of the cost of goods is compounded taxes.

This is not a problem at the border for newly arrived immigrant mothers as they have a 10 year supply on hand.

This only affects legal citizens.

This reliance upon a single source provider for WIC is penny wise and pound foolish. Sure in normal times the govt saves time by dealing with a single plant. Less need for more inspection personnel to travel around to multiple plants. Easier to place orders from a single source.

That, of course, ignores any potential inefficiency due to monopoly behavior and influence peddling to gain and maintain the contract. Bureaucrats are generally speaking motivated to do the least work and make minimal effort. These single source arrangements suit them. Obviously when an unexpected event shuts down the single source producer there are catastrophic consequences. Bureaucrats don’t care about that because they won’t be held accountable for their decisions.

Nor will Congress in the aggregate face consequences for foolishly delegating their authority to a less than motivated bureaucracy. They prefer it this way because they can now attempt shift any blame to some GS 11 within the federal leviathan.

Like the mysterious releases from the US strategic oil reserve that nobody seems to question, I’m a little confused on exactly where this baby formula expensively airlifted in by USAF assets is being distributed and to whom. What are they being charged for it? Enough to pay the freight so to speak?

Yet another production facility that contributes to America’s food chain supply has had an “accident.” At what point is there a pattern?

A mysterious and bizarre wooden shoe found at each site…

How do you start a flood?

In the end a profitable accident?

Aside from everything else, I’m pretty sure this process wouldn’t take a “few weeks” if the FDA inspectors weren’t gumming up the works. Same goes for the plant shutdown that started all this, there was no reason to hold up that plant reopening for 4 months. If I didn’t know better I’d think they’d been ordered to slow-walk the reopening so as to create the shortages we’re seeing.