As US Navy Targets Pronouns, China Launches its Most Advanced Carrier

As US Navy Targets Pronouns, China Launches its Most Advanced Carrier 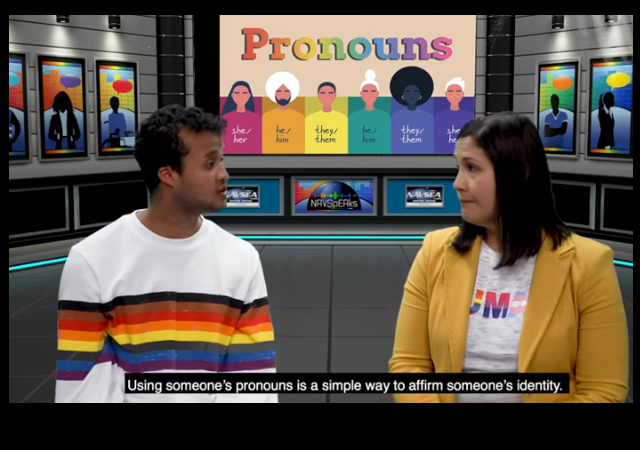 The US Navy continues to implement the Biden administration’s most critical priorities.

Footage from a Navy instructional video on how to use the “right” pronouns went viral Monday.

“Using the right pronouns is a simple way to affirm someone’s identity,” Jony Rozon, an engineer with the Naval Undersea Warfare Center, says in footage of the video posted online.

“It is a signal of acceptance and respect,” he continues.

It is critical to use acceptance and respect to forge a safe space for everybody, according to the training video.

Inclusive language is crucial for doing just that, the video explains.

That video should do a lot to…squash the number of potential naval recruits seeking to join in the wake of Top Gun: Maverick. Could you envision Maverick asking Iceman what pronoun to use?

As if the video isn’t disturbing enough, there are reports that the US Navy has dismissed five commanding officers in less than one week.

Cmdr. Peter Lesaca, commanding officer of USS Preble guided-missile destroyer, was relieved from his duties ‘due to loss of confidence in his ability to command,’ according to a Navy statement released on Tuesday.

‘Navy commanding officers are held to high standards of personal and professional conduct,’ the Navy said. ‘They are expected to uphold the highest standards of responsibility, reliability and leadership, and the Navy holds them accountable when they fall short of these standards.’

Lesaca is the the latest dismissal within span of just six days and the Navy has not provided additional details as to why he or the other officers were fired.

One of the commanding officers, who was fired on June 8, was reportedly relieved due to inappropriate behavior.

The ship, named Fujian after the Chinese province that sits across from Taiwan, is the navy’s most modern and resembles the latest American carrier, the Gerald R. Ford. Though the launch was widely expected, it comes amid heightened tensions in the South China Sea and days after China’s defense minister, Gen. Wei Fenghe, warned it would not back down from war with Taiwan if Taiwan took steps toward independence.

“The launch is a major milestone for the People’s Liberation Army,” said Drew Thompson, a former Pentagon official responsible for China, adding that it reflected “China’s long-term ambitions to project power militarily and compete directly against the United States.”

Chinese state media on Friday showed naval officers watching as fireworks were set off and confetti was released alongside the carrier in the Jiangnan Shipyard near Shanghai. Red banners carrying slogans about fulfilling the party’s goal of building a modern navy and a strong army were draped across the carrier’s deck.

I hope that the US Navy can be salvaged when the Biden administration comes to an end.

Obama – had a lot to do with the advancement of wokeness in the military -the was a major purge of good military personnel with replacement of woke policy generals.

Yes he did and I retired under his first run.

I started under the end of the Carter years when we were devastated and went through the Exodus of 0-3’s/E-7’s under Slick Willy.

I went in at the start of the Carter years. It was already drowning in all this racial preference and sexual harrassment crap.

Ummm, well isn’t that special…
They are being trained to defeat their enemies, while we train to recognize the multifaceted use of pronouns.. 🙄

0 laid the foundation for much of the destruction we are witnessing in so many levels.
Re pronouns, what a crock.
However if one must, there really is a simple solution that’s been around for a long time-
“Y’all”.
All inclusive.

What was wrong with “maggot?” Maggot is genderless and inclusive, signals acceptance and respect, and promotes group cohesiveness while affirming individual identity.

Maybe if they change the pronunciation to “Mah-GOH”, like it’s French. More exotic, you know!

How about larvae? The Germans are preparing an end run around the Mah GOH Line.

If you need a “safe space” when someone accidentally calls you by the wrong pronoun, how the freak are you going to respond when the enemy is actually trying to exterminate you?!!! No thank. If you’re offended by wrong pronouns, I don’t want you in the military because you’ll be the first to collapse in a pile of jello, ineffective and useless as a warrior.

How about teaching them how to fight fires in port? When your ship is ablaze, no one gives a shit about pronouns.

The people responsible for this BS know how dangerous this is. They cannot not know this. They aren’t that stupid. But they must believe they will be insulated from the damage. I think that’s where the stupidity comes into play. A military that let’s military things slide – oops was that a cruise missile that just went by?

Leftists are awful thinkers. Great at emoting. Awful at thinking.

“It’s coming over the horizon now, and it’s our job to sink it.”
“Sir? Shouldn’t we first determine if it prefers to be called something other than ‘it?'”

Had I an edit button, I’d change the above to “her.”
And now I wonder if that little piece of nautical tradition is on the point of being scuttled, too.

Hang the pronouns on the bulkhead and hit the deck you landlubber.

I wonder how they will handle…

(one word, one breath, one syllable)

Stories like this one make me glad I am retired. “Accept a correction” and “ultimately about respect” to which I respond: “Whiskey-Tango-Foxtrot?”

Here is this for a correction: “use the rules of standard English.” In this instance, “a pronoun is a word which can function by itself as a noun phrase that refers to either participants in the discourse or to someone or something in the discourse.” Single pronouns refer to a person; a plural pronoun refers to more than one person. A male of the species in the singular is: he/him; a female is: she/her. Pronouns do not serve a therapeutic function to affirm the speaker’s subjective identification. Insisting that another person use pronouns at odds with reality is oppressive.

It was all downhill after 1850 when Congress outlawed naval flogging. Those in need of a good flogging today must go to the Castro district of San Francisco.

Nonsense. There’s a perfectly good fun-dungeon in the Senate sub-basement.

But many members have been eschewing it because the John Roberts blackmail photos were taken there.

Livestock in the senate? Eww!

While we have many problems in our Navy, don’t be misled into thinking the chinese are anywhere near our blue water level.

The china carrier is just floating, several more years before it is complete…

Oh, yea. What’s a carrier for? That’s right, aircraft. How many capable carrier based aircraft do the chinese have?
And how many naval aviators do they have? Do they have the means to train the naval aviator?

They have 1.6 billion people. They are technologically advanced.

They’re going to own us.

I notice you didn’t answer the question.
They had a billion in 1980, so what?

“They are technologically advanced.”

IF we keep letting them rob us for another 25 years perhaps they will begin to catch up.

What is the per capita GDP of the Chinese? It’s approximately 1/6 of ours. 1/6.
Sorry, but your buying into the hype and not looking at the reality.

make that west of the pacific coast 🙂

Dunno. They’ve come a very long way in the past 25 years. Their buildings are new and well-engineered. High end American universities have enormous Asian populations. Asian students were rare at MIT in the 60s. Today they constitute a sizable group, if not a majority. China (among others) have been mining our talent for a long time.

I think it would be a grave error to underestimate them. They may have 1/6 our GDP, but you can bet they aren’t pissing it away on the bs we are. If they take most of their GDP and aim it at military development, they’ll be well ahed of us. Maybe they already are.

And their government doesn’t answer to the population: it’s somewhere between a dictatorship and an oligarchy. If a few million people die to service the military’s needs, I doubt they’d care.

And then, there’s always good ol’ Wuhan, and its predictable effect on the rest of the world.

I will agree that their ability to project power is inferior and will be for some time yet. But if they move on Taiwan and we decide to contest it we will be fighting on their turf.

Taiwan gets a say in this. WW1 and WW2 were fought on “their” turf. That is considered a feature.

Today’s Navy is building ships that are pulled from service after a few years and have made a habit out of crashing ships. Maybe they shouykld learn to be a powerful military force first.

But what do you expect when milly is worried about nail polish colors.

Yeah, in my day a CO who made it a habit to crash into other ships, piers, etc. was mocked as “Captain Crunch”. That would be a “microaggression” nowadays I suppose.

What ships are being pulled from service after “a few years”, other than the Freedom class littoral combat ships which require refitting of their propulsion systems?

Do you know what the history is of new ship issues in our Navy and in the other Navy’s around the world?

Do you have any idea how far ahead of everyone else the US Navy is?

We are being ruled by biological adults possessing the emotional maturity and intellectual seriousness of toddlers. The Dumb-o-crats cannot be taken seriously, on any issue under the Sun. Everything that these idiots engage in, every policy idea that the proffer is intrinsically corrosive, stupid and farcical.

The next “Top Gun” movie can be titled “Top Gun: Full Throttle Trannies.”

Continuing with a mechanical reference, how about “Trannies In Overdrive”?
.

I’m another old vet who is glad I’m well out of it.

Now, on board ship things were often less formal but in that case last names were used most often, or a nickname if you had one.

I can only imagine the COs I served under reacting to me saying “how is xir this morning, skipper?”

No comprende.
And for good reason.
btw, those two obviously insecure ‘spokespeople’ (can I use that term?) shouldn’t be lecturing people who have been hired to break things and kill people.

I weep for what my Navy has become