It appears air travel Armageddon is here to stay…likely until sometime after 2024. 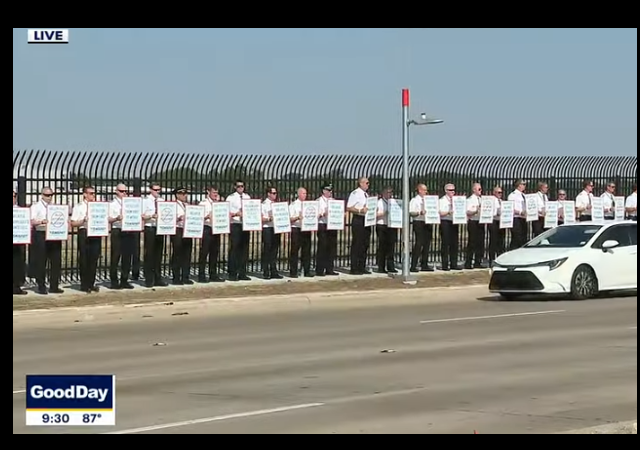 I recently noted that Secretary of Transportation Pete Buttigieg proposed forcing airlines to hire more staff in the wake of complete chaos that has been described as air travel Armageddon.

There were enough Southwest pilots to make a line of sign-holders in front of the entire terminal, with another group inside near ticketing, one on the road leading into the airport and another along Mockingbird Lane outside the airport.

“Our point is that you have enough pilots today to operate the airline,” said Southwest Airlines Pilots Association president Casey Murray. “The problem is you’re misusing them.”

Murray said the company’s pilot scheduling practices puts the carrier at risk for more cancellations and delays during peak summer travel months and busy weekends such as the upcoming Independence Day holiday.

Many pilots are canceling their shifts due to fatigue, and blaming it on erratic schedules from delays and cancellations.

At the protest on Tuesday, Murray said he wants passengers to know that the pilots stand with them during this travel frenzy following the COVID pandemic.

‘We’re tired of saying “I’m sorry” at every flight,’ he said at the demonstration, according to KDFW.

But, he said, pilots are feeling overworked to meet the never-ending travel demand amid the staff shortages.

‘So it adds up and the more flying that there is that has to be covered.’

Southwest isn’t the only airline with staffing issues. American Airlines is canceling routes in the wake of its staffing shortage…including the important city of Ithaca, NY.

American Airlines will eliminate service for three cities following the Labor Day holiday weekend as a result of staffing shortages, marking the latest hiccup for the airline industry amid thousands of cancellations and cuts in recent months.

An airline spokesperson said the company will drop service to Toledo, Ohio; Ithaca, N.Y.; and Islip, N.Y., on Sept. 7 in response to a “regional pilot shortage.”

“We’re extremely grateful for the care and service our team members provided to our customers in Islip, Ithaca and Toledo, and are working closely with them during this time,” the spokesperson said in an email to The Hill. “We’ll proactively reach out to customers scheduled to travel after this date to offer alternate arrangements.”

It appears air travel Armageddon is here to stay…likely until sometime after 2024.

I just completed a river cruise in Europe. Almost everyone on board had flight delays, cancellations or changes. 20% had luggage problems including 4 people that never got their luggage until the end of the trip. So make sure you have all your medications and a couple of changes of clothes in your carryon.

Brandon and DemoncRats must be loving this. Fewer flights mean less fossil fuel usage, and ultimately gets us closer to the preindustrial age they crave so much for.

It also means more fuel for the private jets that ferry the elite to Davos and international climate change conferences.

Unions operate for the benefit of unions.

I have been a passenger on Southwest twice. Crappy service with employees who did not want to be working. They are at the top of the list of airlines I will not fly on.

My music teacher’s son is a cellist. He is in California for some sort of a big festival. His flight was canceled or delayed four times. Finally, Delta offered to get him on some convoluted route from Atlanta to L.A, via two other stops.

First, the kid is 15 and has never traveled alone. Sure, many kids do, far younger. But, they are not transporting a cello.

They finally got the entire thing untangled, but it took calling someone with some “pull”.

Wow a pilot shortage? Who could have predicted that PO a workforce with critical skills via a Vax mandate that caused at some to retire or simply quit would have this sort of impact? /S

So some (? many) pilots are not working today because they refused to take the COVID vaccine. Some (? many) retired.

Sounds like there are more pilots out of the system today then just that. Where did the rest of the pilots go?

Instead of whinging, or planning to train new pilots who will be ready to fly a 737 in about 2028 or so, perhaps the airlines could entice the eligible, non-working pilots back?

perhaps the airlines could entice the eligible, non-working pilots back?

What percentage are eligible? None of the unjabbed are so long as Biden’s vax mandate is in force.

there IS asimple solution to that “dilemma” what will work until the midterm elections:

agree to rehire non-complying pilots with the “understanding” they will roll up their sleeves “sometime”. Then oush back the “not so dead” line every six months or so.
Biden’s madate is illegal and unenforceable, it will jjst take some shutzah on the part of management to ignore it all. Worst case, gummit can bring court action… which the airlines will win, particulary if it takes two to five years to get a judgement.
Another even easier and safer approach would be to promise to “reevaluate” all applications for moral. religiou,s health “exemptions” for the injectioin mandates. Have them fill out simple pwperwork which “human resources” will then “examine” for the next three years or so, with “terminatin” pending an unfavourable “decision” on the exemption application. Which appliction never really gets examined for the simple reason there are no examiners availble to examine them.

IF the airlines really wanted to address the issue,s they WOULD. ALL such regulations have holes in them,most of them holes so big an unskilled pilot could drive a 787 through them with their eyes closed.

Where did the rest of the pilots go?

They never existed. And up until the pandemic the airline industry and union was able to deal with it with little problem. But while minimum staffing/scheduling worked fine pre-pandemic it was totally disrupted during the pandemic when they fired all those that refused covid vaccination. And now post-pandemic they are on the wrong side of the line staffing wise and chaos has ensued in the airline industry.

I used to work there and this is nothing new. Whenever it was time for contract negotiations, there was always something that they complained about. Pilots are mostly a bunch of prima donnas.