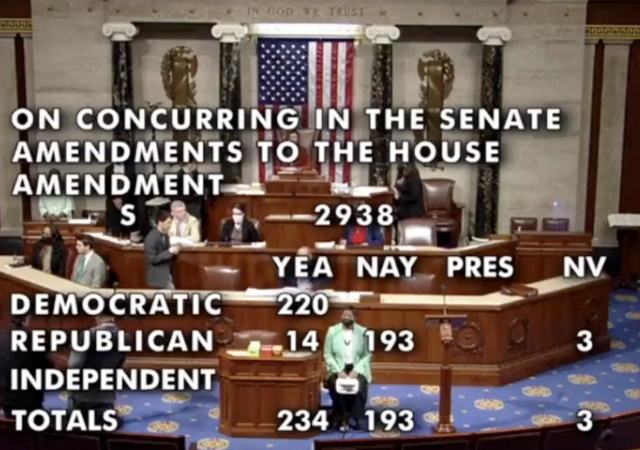 What is wrong with these people? Rhetorical question.

The 234-193 vote, with 14 Republicans joining all Democrats present in favor, put into law a requirement that background checks cover the juvenile and mental-health records of gun purchasers under 21 years of age. The bill would also encourage states to enact extreme risk protection orders, also known as red-flag laws, to allow courts to order guns to be temporarily removed from people deemed dangerous. It would impose new criminal penalties on straw purchases, or buying a gun for someone not permitted to, and gun trafficking.

More than half of the $15 billion allocated over 10 years would go for mental-health services, including allowing more states to test community-based behavioral health centers with round-the-clock emergency psychiatric services. It provides grants for school security and violence-prevention programs. It also closes the so-called boyfriend loophole, banning dating partners or recent dating partners convicted of domestic violence from purchasing a firearm.

Sooner or later, all swamp alligators need to show their nostrils.

A brief glance at the members shows they all seem to be retiring or in purple States or CD except Gonzalez. Uvalde is in Rep Gonzalez TX congressional district for what that’s worth.

Actually, there are far more than that. Whatever number is needed to snatch defeat from the jaws of victory, you can bet they will materialize. Had McConnell needed 50 Republican votes for this, he probably would have got them.

As I like to say, even if there were 100 Republicans in the Senate, they would still lose to the Democrats by one vote.

OK, face it, we lost this round. Now its time to fight it at the state level.

No way to spin it.

We also need to put the RINO GOPe on notice and run them out of politics.

There is no mistaking this bill. It is not ‘stupid” and there is no intent whatsoever to “curb gun violence” and its not ‘for the children”.

This is a deliberate infrastructure level bill with the sole intent to disarm the US citizenry.

Do not view IT or any who SUPPORT IT as anything less.

Stop lying to yourself and pretending otherwise.

THEY mean business and are quite clear in their intentions- we best get in the game.

I agree. The problem is many of these reps are retiring and the rest seem to be in rino purple districts. We must get active in recruiting quality primary opponents wherever we live to get the most populist right, tea party, MAGA candidate elected.

Makes me wonder now how many of these “purple’ districts are purple BECAUSE of a RINO.

I’m going to put the cussing on one of them personally next time I see him. That sorry pr!k probably did this out of spite after he got “dethroned”.

That goes for legislation as well as the politicians who voted for it.

The next two national elections are absolutely critical.

They’re scared to death of being in the majority again, aren’t they?

no, too few doing this and its always the same group.

This is an internal power play and showing who is “the boss’. This group isn’t interested whether they are in charge or not- they get paid the same. ( possibly more as the underdog)

Actually, I rather believe this in a way, but it is not “Republican” fear of being in a majority. After all, they never do anything when they are in the majority. Things are so bad that despite voter fraud the voters may defeat the Democrats outside of the margin of fraud if we have elections in November. So the Democrats may have ordered their Republican subordinates in the UniParty to do things that will micturate in the Wheaties of their voter base so that they do not vote at all. Thus allowing the Democrats to get back within the margin of fraud.

Makes as much sense as anything else that has happened for the last few years.

I’m a past member of NRA. I still support them, but let’s face the harsh reality that we have large classes of violent and immature people that will shoot you in the head, over a cell phone or a few dollars in your wallet. I know, because I walked into a bank robbery and store robbery. We also large numbers that are seriously mentally ill, yet wandering the streets with guns. Both groups should be considered minors in the law. Truly, allowing them to possess guns is like arming a 7-year old with a gun. To me, this is not a conservative vs. leftwing view. It just doesn’t make sense treating low-iq adults and the mentally ill as adults able to use guns in a mature way.

Spare us and don’t troll.

First, evil people, are not somehow excused by or even clinically “mentally ill”. That’s a liberal excuse to further an agenda.

The law already defines what a minor and a criminal is and the law already has vehicles and tests to determine legitimate mental illness.

None of them are a part of or apply to this Trojan horse confiscation bill being paraded around by leftist and their RINO accomplices as “gun safety”.

Take your liberal trolling crap and leave now before your feelings really get hurt.

How insulting! Try using rational thoughts, instead of emotions, You’re not a child.

Mass killings grab the headlines, but only 0.2% of homicides are due to them and only 1% of homicide victims die in mass killings. The left-wing media exaggerates the extent of mass killings for political purposes. Look at the major causes of gun violence: 54% of all deaths by guns are suicides. Many of those are due to depression, psychosis and substance abuse. It’s the 3rd leading cause of death in young people age 15-24. It’s devastating to families when their children die. It’s worth restricting access to guns and drugs for people who are suicidal.

63% of all suicides were in single-parent families. The biggest factor in gun violence appears to be the lack of an involved father. That’s the singles biggest step to stop gun violence.

According to FBI statistics, Blacks commit 51% of all murders, but they make up only 13.4% of the population. The mean IQ of blacks is 85. This is the range of mental subnormality. They are not capable of handling guns, rationally.

Gun violence is due mostly to suicides and by people with low IQs. The way to solve it, is to deal with these issues that I mentioned.

Your listing of stats makes for obvious talking points…maybe too obvious?

Obvious? I use statistics, not as a talking points, but to quantify the cause of homicides, to properly define the problem. If you listen to the media, you’ll get the impression that gun violence is due to mass murderers — they down play the other causes, for political purposes and because the real causes are not sensational. But, you can show through statistics, that most gun violence is due to suicides of young people which severely afflicts families. This indicates the proper solution is to deal more effectively with the cause of suicides, which is mostly a lack of involved father. Another cause is giving low-iq blacks access to guns. I don’t mean to be offensive to those who emotionally believe we are all equal, but the science indicates most blacks are borderline mentally retarded. They should not have access to guns. Take guns away from them and homicides will drop by more than 1/2. Our murder rate is magnitudes higher than it should be for a 1st world nation, mostly due to black homicides.

I had no intent of throwing out talking points. Instead, I try to use statistics to indicate the real problems and their solutions.

Your selection and use of ‘statistics” is non sequitur and misapplied.

Your focus on blacks sounds a bit racist too.

A troll trying to slide in another point to build a false case it seems.

First, stop whining troll and if you felt “insulted’ before- get ready for round 2.

Second, I use statistics probably more than you do and can easily deconstruct them and identify the falsities as i am going to do now.

The statistics proper have questionable source data and vetting but thats another subject- we will discuss applying them to the agenda at hand which is where the principle falsity lies in relation to the subject.

“Suicide” is a decision made from a clear mind ( like it or not)- at best “conditions” can INFLUENCE the decision but not “make it”.

The problem is that despite the whinnings of the profession- there is no way to accurately predict who will do what. In many cases ( depression et al) the root cause is the inability to effectively deal with reality as a direct result of moral decay and educational decline so its an external factor to any mental condition

Regardless of that, “restricting” access to nothing more than a TOOL to execute an ACT resulting from this alleged condition does nothing because if the INTENT is there- another “tool” ( or vehicle) will be chosen.

That’s where the leftist lies fall apart. The “gun” is NOT a “causal factor” in the DECISION to commit suicide.

Basically its infringing on my RIGHT for a non linear manufactured item which has no say in its use.

By the same token, “gun violence” is a made up media leftist marketing term and rallying cry designed to trigger an emotional response. Nothing more.

There is HUMAN violence ( again, another conscious decision to violate law- not an accident) which use a variety of “tools’ to amplify that violence. ( the tool has no say)

So, to disarm the potential victim under the guise of somehow “affecting” the instigator is a fool’s argument on its face.

It sounds like you live in an undesirable area.

Change your name to ruralliberalguy

Can just anyone call in a Red Flag?
I saw a video of a drug addict with a firearm and a prostitute. (Hunter)
I saw several members Congress espousing violence. Should firearms be removed from their live in security? They may have access.

We could (should?) Do this all week.

It is tempting, isn’t it, to identify progressives who own guns and then red-flag them. Anonymously, of course, as the governor of Pennsylvania taught us to do.

And, I might add, to track these red flags on progressive gun owners — if the courts don’t follow through (because privilege), then publicize it.

I’m waiting for the first challenge of a teens sealed juvenile records search case to come to the court from under this new law.

Gun laws are not ment for the Marxist protected class,
These DAs in big cities let gun violations off at a drop of a hat, Hunter with provable firearm violations will never see a charge against him. Red Flag laws will not be used on gang bangers and mostly for political opponents of the Left.

Biden signed the bill this morning.

I am still waiting to hear from any governors and AGs in the red states objecting to this bill. Too early for them to comment? Or reading the bill to build their arguments or what? Or do they want this bill passed?

AND how will this stop the violence in several blue cities and states?