The judge has scheduled a hearing on remedies for June 21, 2022. If the firing was the fruit of a poisonous tree — the imposition of a vaccine mandate in violation of the Open Meetings Act — the firing should be reversed as it was based on an unlawful mandate. 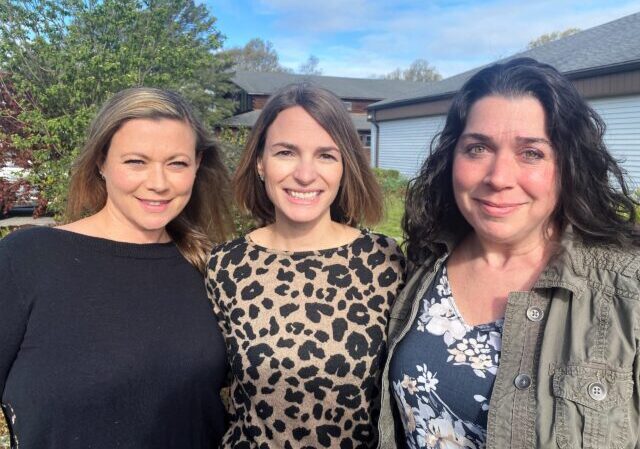 The three Barrington, Rhode Island, teachers who were fired for refusing the Covid vaccine on religious grounds scored an important early win in court yesterday when Associate Justice Jeffrey A. Lanphear of the Rhode Island Superior Court ruled that the Barrington School Committee failed to give the teachers—and the public—sufficient notice before enacting its Covid vaccine mandate. 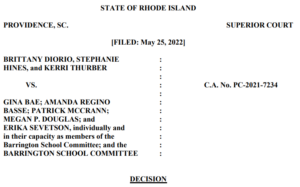 As reported here last week, each of the three teachers—Brittany DiOrio, Stephanie Hines, and Kerri Thurber—had requested a religious exemption from taking the Barrington school district’s mandatory Covid vaccine. The district denied their requests, suspended them without pay, and ultimately fired them effective January 1st of this year. The school committee upheld that decision at a post-deprivation hearing held at the end of March, and the teachers plan an appeal. 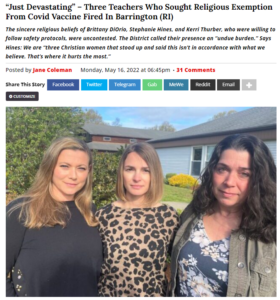 But while the administrative appeals process seems likely to drag on for months, it is only one piece of the teachers’ legal battle. They have also asked the Rhode Island Superior Court to block the mandate, arguing that the school district violated Rhode Island’s Open Meetings Act, which requires notice of the school district’s public meetings, including “the nature of the business to be discussed.”

The school’s mandate took the teachers by surprise. They were due back in school by late August 2021, but it was not until September 21st that a letter came from Superintendent Michael Messore notifying them that they would have to vaccinate by November 1st or face termination. With the school year already underway, the teachers had no time to seek other options.

In fact, unbeknownst to the teachers, and well before September 21st, the district’s plans to implement a vaccine policy were already in progress. The school committee considered and approved the policy at meetings that took place during August and September last year, the court found.

But nowhere was any notice about the vaccine mandates to be found, either in the minutes or the agenda posted for any of the meetings. What’s more, the court said, “although there were numerous separate postings on the Secretary of State’s website, one for each of the Barrington School Committee meetings, the postings never mentioned mandatory vaccinations.” [emphasis added] Remarkably, “the detailed seven-page policy itself, was never posted.” “With minimal and vague notice,” the court stated, “it is reasonable to conclude that few knew of the actions being taken.”

A new protocol setting policy during a pandemic is not only important to the teacher-plaintiffs, but it is reasonable to conclude that it would be important to the district’s 3366 students, their parents, administrators, other teachers, visitors to the schools and to the public at large.

The court’s ruling also reaches beyond the three teachers. Proper notice of public meetings (with limited exceptions),  the court pointed out, as stated in the Open Meetings Act, is “essential to the maintenance of a democratic society.” And as the teachers’ lawyer, Greg Piccirilli said yesterday, Judge Lanphear’s decision “upholding the right of the public to open government” is not just a victory for his clients.  “It is for all Barrington residents.” 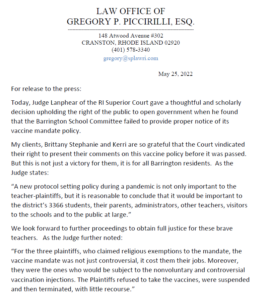 The judge has scheduled a hearing on remedies for June 21, 2022.

The teachers’ attorney will ask that the firings be voided, as reported in The Barrington Times:

Piccirilli said it is possible that the judge could rule the vaccine mandate policy void and the teachers’ terminations void as well.

“It’s possible, we’re certainly arguing for that,” he said. “One thing flows from another.”

Piccirilli said there are previous cases where the courts have done just that, and ordered fired employees to be given their jobs back.

Congrats to the teachers.

Interesting article in the Epoch Times “US Schools Facing Mass Exodus of Teachers Who Won’t Return This Fall” – see https://www.theepochtimes.com/us-schools-facing-mass-exodus-of-teachers-who-wont-return-this-fall_4492739.html

How stupid is it for a district to fire people who want to teach, over taking a vaccine that by now we know does not work – which means there is only a downside for them – potential side effects in the near and long term.

Educrats making ideological decisions that do not reflect reality and result in real harm is par for the course.

I hope they get their jobs back, but I suspect the administrators will make their lives a living hell in revenge for their being uppity and not doing what they’re told.

Which is why the teachers should seek maximum damages. It is important that all involved administrators lose their jobs.

What a surprise, the little Hitlers running the government didn’t even follow their own rules…

Dibs on the one on the left.

Shallow comment but I can’t help but wonder if your 3 downvotes are from the 3 in the picture.

The comment was a complement to the one, I doubt she would downvote it. I is inherent that physical appearance is judged first, and that when direct contact is possible other traits are judged, this is true for men and women alike. Quite often, more attractive people are shallower than others, it usually takes them longer to build character

I bet she denies your appeal.

They’re NOT ruling that the mandate is unconstitutional, just that they didn’t give ‘proper notice’ before doing it.

Exactly, which means they only have to publish it now and fire them later. Hardly the victory their lawyer congratulates himself for.

No, they have to put it through an open meeting. And the Barrington school parents are now on high alert to shove it back down their socialist throats.

The main point here is that the Barrington School Committee tried to sneak in a policy under the wire, and that they refused to take responsibility for their arrogant action. As a result, three brave and eminently qualified teachers were terminated.

It’s worth noting that the Chair of the Barrington School Committee will NOT run for reelection.

Good for the teachers that the court has ruled in their favor, so far.
The whole idea is unconstitutional and shouldn’t rely upon a religious exemption.

Again we see berserk government agencies at every level trampling over the Constitution. Who gave these agencies the right in the first place to dictate medical treatment on individuals? I suspect there is no such law.

See what happens when you try going shit on the sly!

Now they must be made to pay!

They dom’t believe what they say and their statements do not extend from any principles other than the acquisition of power.

No. “Fruit of the poisonous tree” is a general rule most often cited in 4th amendment cases, but it is not particular to the 4th amendment.

The current per capita (per 100k) infection rate, hospitalization rate, and death rate of the vax and unvaxed is near equal with little or no difference in rates.

the effectiveness of the boosters, (2nd & 3rd boosters) are barely lasting one to two months.

there are some emerging studies which indicate that the vaccine is actually inhibiting the development of immunity.