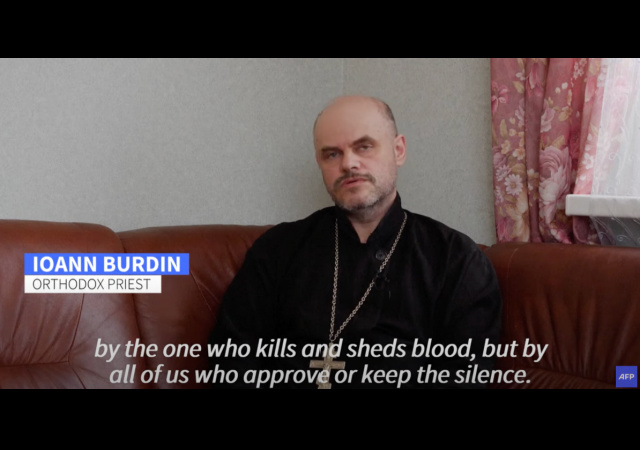 Russian priests have spoken out against the war despite threats of prison and fines.

The ban means some of the top-rated male and female players cannot play in the most famous tennis tournament:

“I think it’s very unfair of (on) my Russian tennis mates, my colleagues … it’s not their fault what’s happening in this moment with the war,” Nadal, a 21-time Grand Slam winner, said in Spain where both he and Djokovic are preparing to play in the Madrid Open.

“I’m sorry for them,” Nadal said. “Wimbledon just took their decision … the government didn’t force them to do it.”

Nadal added: “Let’s see what happens in the next weeks, if the players will take some kind of decision in that regard.”

Djokovic compared the situation of the excluded players to what he went through in January when he was unable to play the Australian Open. He was deported from Australia for not being vaccinated against COVID-19.

“It’s not the same thing, but going through something similar earlier this year for myself, it’s frustrating knowing that you’re not able to play,” Djokovic said. “I still stand by my position that I don’t support the (Wimbledon) decision. I think it’s just not fair, it’s not right, but it is what it is.”

Schumer said they will target the oligarchs:

“Ukraine needs all the help it can get and, at the same time, we need all the assets we can put together to give Ukraine the aid it needs,” Schumer said at a media briefing in New York City.

President Joe Biden asked Congress to approve $33 billion in assistance for Kyiv on Thursday in what would mark a dramatic escalation of U.S. funding for Ukraine more than two months after it was invaded by Russia. read more

His administration also asked lawmakers to include provisions to help it seize more assets, liquidate them and send Ukraine the money.

Schumer said the provisions being added would streamline the forfeiture process for oligarch-owned properties in the United States, while allowing for expedited reviews in federal court, as requested by the White House.

They would also make it a criminal offense to knowingly possess proceeds obtained from “corrupt dealings” with the Russian government, he said.

“It’s time for sanctioned Russian oligarchs to be held accountable for the ill-gotten wealth that they have received,” Schumer said.

The Russian Orthodox Church remains behind Putin’s war in Ukraine. Leader Patrick Kirill boasted that God is on Putin’s side.

However, priests within the church spokes out against the war. They face punishment and sanctions while doing so.

“I’d like to see one or two of my opponents sitting right here,” the 89-year-old says, pointing to an empty armchair in his living room full of gilded icons.

The white-bearded priest in a black cassock is one of the few Russian Orthodox priests to have spoken out against Moscow’s military operation in Ukraine.

In a quavering voice, but without hesitation, he explains: “I’m afraid I am a bad priest. I’ve never been against all wars but I’ve always been against any land-grabbing, aggressive war.”

Ukraine “is an independent state and let them build their state as they see necessary,” he tells AFP in his house in the hamlet of Novo-Bely Kamen on the banks of the River Volga in the Kostroma region, a six-hour drive from Moscow.

Edelshtein signed a letter by a fellow priest, Father Ioann Burdin, which condemned the war: “The blood of Ukrainian residents will remain on the hands not only of the rulers of Russia and soldiers carrying out this order. Their blood is on the hands of each of us who approve this war or simply remain silent.”

Investigators brought in Burdin after he “preached about the human cost of the ongoing fighting.”

They ordered Burdin to pay a 35,000 rubles ($489) fine “for ‘discrediting’ the armed forces.” If Burdin repeats these “offenses” he can face up to three years in prison.

A woman told the court: “During the sermon, Father Burdin… told us that he was going to pray for Ukraine.”

Burdin has not stopped speaking out against the war” “For me, the commandment ‘Thou shalt not kill’ is unconditional.”

Burdin hinted others might feel the same way he does but the threat against them is too great to say anything:

He says few priests oppose the conflict because many are susceptible to “propaganda”, combined with the fear of sanctions and prosecution.

Burdin, who teams his black cassock with a baseball cap and has a Telegram channel, says police have photographed his house and car.

It is not “Patrick Kirill”, it is *Patriarch* Kirill. Patriarch is a title for the head of a national and/or ancient church in Orthodoxy.

How about we even up the authorization to $50 billion with $33 billion to Ukraine and $17 billion to fund completion of the border wall, increased interior enforcement and removal for illegal aliens.

Similarly how about imposing similar penalties for institutions who employ illegal immigrants, provide financial services to them or the cartels and of course the family members of all those.

I hear you and all but we know that’s NGTH because of who is in power.

Right now, I’m just thankful (not to them of course) that it doesn’t seem like this admin wants to play political gamesmanship with the Ukraine funding by tying it into a bill for their pet causes. They have, of course, done this quite often in the past.

You are almost certainly correct. Though a public push along these lines would begin to move the discussion in the right direction. Sanctions, US located asset seizures and worldwide financial asset seizures for those supporting human trafficking applied to; Individuals and entities (public or private) who aid, assist or benefit from the flow of illegal immigrants. Yes that would mean churches and nonprofits, their donors as well as employers who hire illegal immigrants and contribute to mass migration.

Only one exception would exist; a US Citizen could agree to sponsor an immigrant and their nuclear family. That sponsor would house, cloth feed them. Pay for their medical care and education. Every penny needed to support these immigrants would come from the sponsor. Non payment results in the immediate and permanent deportation of all the immigrants being sponsored by that individual with the permanent loss of ability for future sponsorship.

Much is made by advocates of invoking biblical concepts in support of taking care of strangers. Let these advocates commit to spend their personal resources to provide that care as opposed to shifting the burden to taxpayers and I feel confident that their appetite for illegal immigration will decrease very dramatically.

Like, I’m something of an anti-Putin hardliner who actually does support Ukrainian border sovereignty, but that should never come before American sovereignty.

Yes make it a felony for any business owner or CEO to hire an illegal immigrant and mandate E verify.

Make it unlawful to provide government assistance to unlawful aliens and their families. Provide free transportation and a stipend for them to return to their home countries or nation’s seeking my migrants.

Complete the border wall and deny entry without legal authorization.

Make NGO’s importing illegals financially liable for any they import both the organisation and individuals.

Since I’m still of the school that this entire was is “Military Kabuki” and I don’t believe anything the Ukrainians, Russians or Western Press says…

I want to know what Putin is really doing ( up to) and what is the Left’s vested interest in it?

Its clearly not taking over the Ukraine ( that may be a parallel deliverable but is not and never was the primary), if that was the mission deliverable, this would have been long over with a “shock and awe” Blitz.

I notice that story about the marine didn’t take off and drum up the support so its been dropped now.

Agreed I just look at the maps and ignore the articles. I trust Russian and Western corporate media to be as object as the NY Times (Walter Duranty) and Pravda were in the 1930’’s. Propaganda is so prevalent because it is so effective.