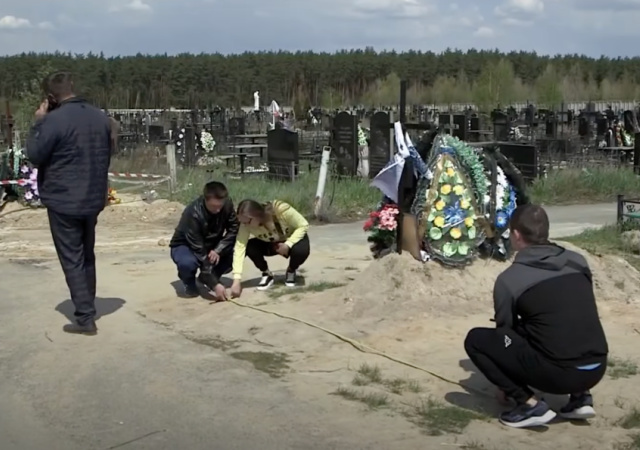 The tensions remain high between Germany and Ukraine as the opposition leader went to Kyiv. He met with President Volodymyr Zelenskyy and other officials.

Chancellor Olaf Scholz said he would not visit and is upset because Ukrainian officials won’t invite President Frank-Walter Steinmeier to Kyiv. Ukraine accused the president of being cozy with Russian President Vladimir Putin when he served as foreign minister.

Investigators also found more evidence of war crimes in Irpin, which is a suburb of Kyiv.

Evacuees Not From Mariupol

The evacuees are not from Mariupol:

The civilians who arrived in Zaporizhzhia Tuesday were not the ones who were evacuated from the Azovstal steel plant in Mariupol days earlier, according to its mayor.

The buses allegedly carrying Ukrainian civilians from the Azovstal steel plant were not actually from Mariupol but from “other cities,” Mayor Vadym Boichenko said during a briefing at Media Center Ukraine.

Nato vehicles with weapons and ammunition for Ukrainian troops that arrived in Ukraine will be destroyed, Russian Defense Minister Sergei Shoigu said.

“The United States and its Nato allies continue to pump weapons to Ukraine. I note that any transport of the North Atlantic Alliance that arrived on the territory of the country with weapons or materiel for the needs of the Ukrainian armed forces is considered by us as a legitimate target for destruction,” Mr Shoigu said at a conference call, according to reports in the Russian media outlet RIA.

Scholz has dragged his feet when it comes to helping Ukraine mainly because Germany relies so much on Russia for its energy sources.

The opposition leader stepped up:

German opposition leader Friedrich Merz, who heads former Chancellor Angela Merkel’s center-right Union bloc, visited the town of Irpin, on the outskirts of Kyiv, to see the destruction caused by the Russian army.

Speaking to reporters against a backdrop of shelled buildings, Merz expressed his “full admiration” to the Ukrainian military for having halted the Russian advance at Irpin, and pledged to help the town rebuild.

German daily Bild reported that Merz later met for an hour with Zelenskyy at his presidential office. Merz’ visit to Kyiv comes days before two German state elections in which his Christian Democratic Union is hoping to retain power.

Speaking during a televised news conference in Irpin, which was one of the most fiercely contested battlefields in the early phase the war, the prosecutor general, Iryna Venediktova, said 290 bodies had been recovered for forensic examination in the city.

She said her team had identified one Russian soldier who she said was responsible for torturing at least 10 people. The victims “had their phones confiscated,” and then they were “beaten on the ribs and legs, threatened with death, and denied food and water,” she said. She said the soldier had been helped by others who had not yet been identified.

Investigators have confirmed that Russia’s 64th Separate Motor Rifle Brigade had been in Irpin. That is the same unit whose members have been accused of kidnapping and torturing unarmed civilians in the nearby town of Bucha.

Prosecutors had also documented summary shootings and mass burials in seven locations, Ms. Venediktova said, as well as the use of numerous weapons banned under the Geneva Conventions, including antipersonnel mines and shells with arrow-shaped shrapnel.

When asked about mounting reports of Russian soldiers raping Ukrainians, Ms. Venediktova said she anticipated a “huge number” of cases would emerge but she did not disclose how many were being investigated. In the first two weeks of April, about 400 cases of sexual violence by Russian soldiers were reported to Ukraine’s ombudswoman for human rights.

“Victims are not ready to speak,” Ms. Venediktova said, adding that many survivors of the assaults remain in Russian-held territories and fear reprisals.

Ukrainian officials always have lots of accusations, but never one shred of evidence. Not even a signed witness statement with any actionable details to file a complaint with some useless, toothless international court. Indeed, Ukraine conveniently claims that the evidence can’t be obtained because the Russians have it all. Indeed, to date every accusation that has been vetted has turned out to be false, without basis to suspect, or more likely perpetrated by Ukrainian militias. Hate Russia all you want for being the aggressor of record–against a despotic oligarchy propped up by Creepy Joe and the CIA–but it’s strange to me that a website for legal scholars would peddle this chronic hearsay as viable, worthwhile content to its readers.

“Ukrainian officials always have lots of accusations, but never one shred of evidence. Not even a signed witness statement with any actionable details to file a complaint with some useless, toothless international court.”

I’m not sure where the hell you’re getting your information but this is simply not true.

The issue is, if you’re just looking at the MSM/major Legacy Media outlets, you’re not going to see most of it precisely because the MSM is dishonest, lazy, and stupid and isn’t well equipped to look for the truth even when it flatters their biases. And the 24/7 News Cycle (more on that later) means that the nitty gritty of battlefield forensics in a foreign country is something they rarely see the reason to do.

The reason you’re seeing so relatively few cases is a combination of that, as well as the fact that it’s about a month and a half in. That’s less time than it took for the international-but-Nazi-sponsored Katyn Commission to do its job on the Katyn Massacre, and that had the benefit of being in a rear area without much combat going on.

I think a lot of people forget this when looking at a military campaign in real time broadcast on umpteen sources. There’s only so much you can do to speed up some processes. I think it’s similar to the people who assume that because Russia hasn’t one YET at day 70 or so, they have already lost, when by the grand scale of things this is not much.

“Indeed, Ukraine conveniently claims that the evidence can’t be obtained because the Russians have it all.”

” Indeed, to date every accusation that has been vetted has turned out to be false, without basis to suspect, or more likely perpetrated by Ukrainian militias.”

Again, I’m not sure where the hell you’re getting this idea but it’s simply not true. Not only have the investigations in Bucha been ongoing but are far enough to discount the idea that it was “false”, but a lot of lesser instances have already been accounted and had the perps arrested by either the Ukrainians or the Russians.

The issue is that Bychkov seems to have “disappeared” into the system of “the Organs” rather than being turned over or tried for war crimes. And I can imagine why. Literal molesting of a child was the kind of thing Putin did not want to be publicized, either by some idiot filming himself, or in a formal trial.

” Hate Russia all you want for being the aggressor of record–”

It’s not merely the aggressor of record, it is the aggresor.

“against a despotic oligarchy”

Oligarchy? Sure. Despotic? Not really. Ukraine’s certainly more democratic and republican than Russia and has more open debate and arguments than much of the supposedly “Free World.”

” propped up by Creepy Joe and the CIA–”

Fair, but also a consensus of its parties.

“but it’s strange to me that a website for legal scholars would peddle this chronic hearsay as viable, worthwhile content to its readers.”

And it’s strange to me that you are peddling provably false claims that literally no Russian atrocity that’s been scrutinized has been found true. I’m pretty disadvantaged as just being a Monolingual English Speaking Scrub who can’t trust either the MSM or Russian propaganda and largely has to look through OSINT, but I’ve been able to dig up some examples.

And again, these are still early days. We should expect it to take longer than this war has taken so far to get a comprehensive report on-say- the Bucha Massacre based on prior war crimes forensics.

And again, Bucha-like Katyn- is “lucky” because it’s relatively far from the active fighting.

Sorry, so we’re to disregard those images of civilians w/gsw to back of the head and hands in some cases still tied together behind their backs? This right after the occupation forces (russian) had departed locations. And not to mention those UN inspections that have documented/ validated these accusations; yep, nothing to see here, right? I would advise that your sources of information need to be reviewed for content as well as accuracy. Btw, that does NOT MSN or abc/cbs/nbc…. Starting to see a pattern?

It looks like we are in the stalemate section of the war. It doesn’t look like much is going on. I guess the Russians are waiting for the Summer.

The Democrats have changed from sending arms to sending money.

When did the U.S. Congress declare war on the Russian Federation? I think I missed it.

They haven’t, but the US and UK did sign treaties ensuring Ukraine’s territorial integrity (along with Russia) back in 1993 in exchange for Ukraine surrendering the nuclear weapons on its base to Russia. That turned out to be a poor choice.

But this is probably bluster, but bluster the Russians are likely not going to be challenged on due to NATO stopping at the border and offloading the resources.

The treaties ensured support for Ukraine having territorial integrity, rather than a guarantee of that.

In hindsight Ukraine will feel it should’ve remained a nuclear power but the US/UK have met their treaty obligations.

(I don’t think you were claiming otherwise, just providing clarification as others have misinterpreted the treaty)

A lot of these comments sound like appeasements’, is it a good idea, does anyone think that Putin will stop with just the Ukraine?

I don’t claim to be an expert on the subject, but it seems to me that war fighting materiel would be a legitimate target, no matter what the source.

Exactly so. Like, I’m extremely caustic about Putin and other atrocities the Russians have committed, but targeting war material is pretty normal.