Russia is so close to gaining Luhansk and Donetsk. 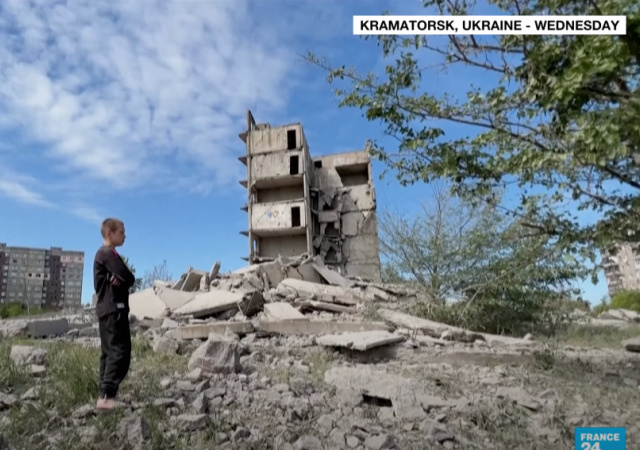 Day 93 in Russia’s full-scale invasion of Ukraine. Sorry about that. It’s hard to keep count. The days are blending together, which is never a good sign.

Russia is not going to stop until it gets the entire Donbas region. Does the West think Russia will stop then? 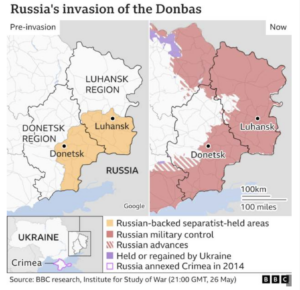 Russian shelling killed at least seven civilians and wounded 17 in the city of Kharkiv in northeastern Ukraine, authorities said.

Meanwhile, as the United States and its allies provide Ukraine with increasingly sophisticated arms, Washington has held discussions with Kyiv about the danger of escalation if it strikes deep inside Russia, US and diplomatic officials told Reuters.

Volodymyr Zelensky, the Ukrainian President, has said Russian bombardments could leave the entire region of Donbas “uninhabited”, accusing the Russians of wanting to reduce its cities to ashes.

“All this, including the deportation of our people and the mass killings of civilians, is an obvious policy of genocide pursued by Russia,” he said in his nightly televised address.

Moscow-backed separatist forces in Ukraine said Friday they had captured Lyman, a strategic town that sits on a road leading to key eastern cities still under Kyiv’s control.

Together with Russian troops, separatist forces have “liberated and taken full control of 220 settlements, including Krasny Liman,” the breakaway region of Donetsk said on its Telegram channel, using an old name for the town.

There was no immediate confirmation from Russia or Ukraine.

Located in the north of the eastern Donetsk region, Lyman lies on the road to Sloviansk and Kramatorsk, the capital of the Ukrainian-controlled part of Donetsk.

Moscow is focused in Ukraine on securing and expanding its gains in the Donbas region, near the border with Russia and home to pro-Kremlin separatists, as well as the southern coast.

Severodonetsk (also spelled Sievierodonetsk) is the last Ukrainian stronghold in Luhansk. However, Russia is trying to gain control of it:

The Ukrainian city of Sievierodonetsk is the centre of fierce fighting in the east of the country. Mayor Oleksandr Stryuk says the city is holding out even though a Russian reconnaissance and sabotage group went into a city hotel.

Mr Stryuk said at least 1,500 people have been killed in Sievierodonetsk and about 12,000 to 13,000 remain in the city, where he said 60 per cent of residential buildings have been destroyed.

Sievierodonetsk is the only part of the Luhansk region in the Donbas under Ukrainian government control, and Russian forces have been trying to cut it off from the rest of Ukrainian-controlled territory.

Mr Stryuk said the main road between the neighboring town of Lysychansk and Bakhmut to the southwest remains open, but travel is dangerous.

He said only 12 people were able to be evacuated on Thursday.

Russia is using all its force in Donbas. I mentioned on Wednesday that Russia outnumbers Ukraine (soldiers, artillery, resources, etc) in Donbas.

Ukraine admitted on Thursday that it has lost ground in Luhansk, one of the regions occupied by pro-Russian separatists since 2014:

A senior Ukrainian military official conceded at a briefing on Thursday that Russia had the upper hand in fighting in Ukraine’s eastern Luhansk region at present.

“Russia has the advantage, but we are doing everything we can,” General Oleksiy Gromov said.

It’s no better in Donetsk:

In an operational update Thursday, the armed forces’ general staff said that while several Russian efforts to advance had been thwarted, “in the directions of Pokrovsky and Klynove, the enemy has partial success, capturing the village of Midna Ruda.”

Midna Ruda is some 10 miles (about 16 kilometers) southeast of Bakhmut, which has come under heavier artillery fire in the last week. Bakhmut is on a key resupply route for Ukrainian units on the frontlines, which would potentially be cut off by further Russian advances.

“In the Donetsk direction, the enemy is shelling our troops, launching missile strikes, conducting surveillance, and increasing air support,” the general staff said.

The general staff also said that other Russian efforts to push west towards the Donetsk region border had been repulsed. It said the Russians continued to bombard Ukrainian troops south of the town of Lyman, much of which fell into Russian hands Tuesday. Video Wednesday showed the Russian flag flying above the town’s municipal offices.

According to the Ukrainians, Russian efforts to advance into Donetsk from the north continue to be frustrated. The front lines in the area have changed little in recent weeks. The general staff said that “with the support of artillery, the enemy carried out an offensive in the direction of the village of Bohorodychne, had no success, and retreated to previous positions.”

Ukraine has control of Kharkiv, which is Ukraine’s second-largest city, but Russia is still aiming for it. The shelling killed nine people:

Nine people, including a five-month-old baby, were killed in Kharkiv on Thursday amid “dense shelling” on residential areas near the city center, according to Oleh Synyehubov, head of the Kharkiv region military administration.

Among those killed was “a family who was simply walking down the street — a man was holding his five-month-old baby in his hands, whom he died holding. (The) mother of this baby is severely wounded and is now in the hospital,” Synyehubov said.

He also described the artillery used, and said the targeting of residential areas in Ukraine’s second-largest city could only be for the purpose of “terrorizing” local residents.

“The enemy shelled with MLRS SMERCH and URAGAN and with artillery, modification of which is being established now by our military experts. According to the available data. the shelling was conducted from the North of the oblast, where our troops are holding their positions and slowly pushing the enemy away to the borders. This was a solely residential area, so the aim of this shelling could only be terrorizing the local residents,” he said.

The official added that it was the Shevchenkivskyi and Kyivskyi districts of Kharkiv that were “densely shelled.” He said in addition to those killed, 19 were injured, among them a nine-year-old child.

“As of now our armed forces holding their positions firmly and there is no question about possible seizure of Kharkiv city,” he said.

“Russia is not going to stop until it gets the entire Donbas region.”

Also: The pro-Russian Donbas region is not going to stop facilitating Russia until Russia gets the entire Donbas region.

Yes, Ukrainians are winning in Donbas. Kiev and patron Biden et al are not.

The swamp wants it’s money laundering operating continuing. If hundreds of thousands have to die or be maimed, so what?

Include McConnell in that swamp crowd.

It’s “their” business, not ours. We’re just customers.

The big question is well the US State Dept. allow Ukraine to negotiate a peace or will they threaten to cut off funds or even replace Zelensky? They are about as trustworthy as the Soprano gang.

Ukraine needs to be conducting strikes deep in to Russia. Let them know no where is safe as long as Russian forces are in the Ukraine.

That might galvanize support in Russia. Plus the Ukrainian lack the ability to do so other than by infiltration. Then there is the possibility that Russia ups the ante outside the Donbas and the coastal areas with kinetic strikes of their own in the western areas…..

Probably not a great idea. It does not appear that then Russian people consider this war a great threat. However, if Ukraine/the west hits targets in Russia then that could likely change. History has shown how the Russian people rise up against a true military threat to their homeland. Napoleon lost almost his entire Grand Army which had defeated virtually every military power in Europe and even occupied Moscow.. Germany was pounded to rubble and millions killed, raped and sent to the gulag after Hitler had driven deep into Russia killing and capturing millions of Russian soldiers. I would not under estimate the Russian will to fight if they really feel threatened.

I don’t think expanding this war from a battle over the Donbas and coastal areas to an all out war in Eastern Europe would be in anyone’s best interest.