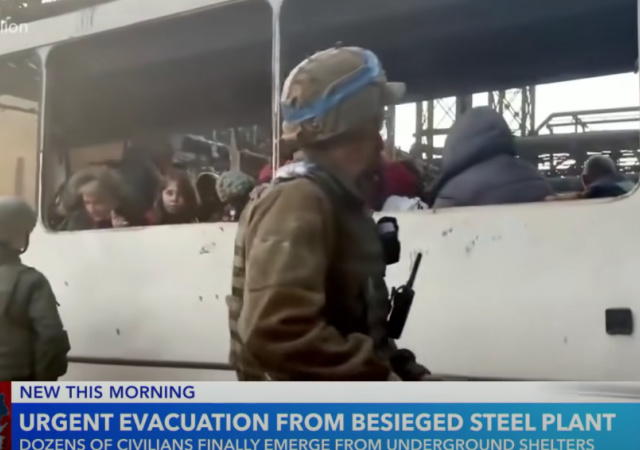 Day 69 of Russia’s full-scale invasion of Ukraine. The evacuation of the steelworks plant in Mariupol started yesterday but hundreds or thousands remain trapped in the devastated city.

Also, does Russian President Vladimir Putin have cancer? Reports say he will have cancer surgery soon. I said on the day he started this invasion he either lost his mind, has cancer, or dying.

A little more now from the mayor of Lviv, Andriy Sadovyi, who is giving an update after missile strikes landed on the western city a few hours ago.

He says the impact of the strikes is still being determined, but three electrical substations were hit causing power outages, and two people are being given medical treatment after being injured.

Power outages are also affecting some medical facilities, he says in an update on Telegram, and the strikes have done “serious damage” to communal infrastructure, with many broken windows and interruptions in the water

With civilians leaving the plant the Russians are now trying to take it over:

We’ve been reporting that Russia has resumed its attack on the Azovstal industrial complex following a ceasefire which allowed hundreds of civilians to be removed.

According to the RIA news agency, the Russian Defence Ministry said on Tuesday that Russian troops started shelling the steel plant in Mariupol after Ukrainian soldiers moved into firing positions.

As the ceasefire was declared, “Azov and Ukrainian servicemen, who are stationed on the plant, took advantage of it. They came out of the basement, they took up firing positions on the territory and in the factory buildings”.

“Now units of the Russian army and the Donetsk People’s Republic, using artillery and aviation, are beginning to destroy these firing positions,” the ministry told the RIA news agency.

Pope Francis Wants to Meet With Putin, Not Hopeful for Peace

What a shock. Putin has not answered the pope’s request:

Pope Francis says he has requested a meeting in Moscow with Russian President Vladimir Putin over the Ukraine war but has heard nothing back.

The 85-year-old told Italy’s Corriere Della Sera newspaper that he had sent a message to Mr Putin around 20 days into the conflict saying “that I was willing to go to Moscow”.

“We have not yet received a response and we are still insisting, though I fear that Putin cannot, and does not, want to have this meeting at this time,” he said.

The pope has repeatedly called for peace in Ukraine and denounced a “cruel and senseless war” but without ever mentioning Mr Putin or Moscow by name.

The head of the Roman Catholic Church also said he would not be travelling to Ukraine anytime soon.

“I’m not going to Kyiv for now. I feel I shouldn’t go. I have to go to Moscow first, I have to meet Putin first,” he said.

Pope Francis also said he is “pessimistic” because “there is not enough will for peace.”

Hungarian Prime Minister Viktor Orban told the pope that Russia has “a plan” to end this war on May 9, which is Victory Day in Russia.

British PM Johnson Admits They Should Have Helped in 2014

What have I said over and over? Russia invaded Ukraine in 2014. This war has been going on for eight years:

He said the West made a mistake in not helping Ukraine in 2014, when Russia annexed the country’s Crimean peninsula.

“We, who are your friends, must be humble about what happened in 2014, because Ukraine was invaded before for the first time, when Crimea was taken from Ukraine and the war in the Donbas began.

“The truth is that we were too slow to grasp what was really happening and we collectively failed to impose the sanctions then that we should have put on Vladimir Putin,” he said.

Boris Johnson addressing Ukrainian parliament today. I have never seen this many standing ovations for a single speech. #Ukraine is certainly lucky to have a friend like the #UK pic.twitter.com/xZWlCvNDgB

Remember reports from February of “The Ghost of Kyiv” which supposedly took out a lot of Russians?

“Ghost of Kiev is a superhero-legend whose character was created by Ukrainians!” the Ukrainian Air Force said in a Facebook post Saturday.

The admission comes after it was reported Friday that 29-year-old Major Stepan Tarabalka, who some had credited with being the Ghost of Kyiv, was shot down and killed in battle last month.

Stories of the legendary pilot grew in the early days of Russia’s invasion of Ukraine, with some crediting the mythical pilot with shooting down at least 40 Russian fighter jets as Ukrainian forces defended the capital city of Kyiv.

Russia said it wants to liberate Ukraine from its neo-Nazi regime even though President Volodymyr Zelensky is Jewish. He lost family members in the Holocaust.

Lavrov shoved his foot deeper into his mouth:

Lavrov sparked a firestorm of criticism in Israel after he said Hitler “had Jewish blood” and that “the most ardent anti-Semites are usually Jews”.

Israel’s foreign minister Yair Lapid demand an apology, saying Lavrov had made “both an unforgivable and outrageous statement as well as a terrible historical error. Jews did not murder themselves in the Holocaust.”

But on Tuesday, Russia’s foreign ministry doubled down on Lavrov’s comments, tweeting that Lapid had made “anti-historical statements… which largely explain why the current Israeli government supports the neo-Nazi regime in Kyiv”.

Russia has repeatedly made baseless claims that the Ukrainian government is run by neo-Nazis as a justification for its invasion.

The war of words between Israel and Russia risks becoming the most serious diplomatic crisis between the two countries in recent times.

Israel has friendly relations with both Ukraine and Russia and has led international mediation efforts to try to stop the war in Ukraine.

Russia is close to overtaking this important port city:

More than 200 civilians were still believed to be holed-up inside a decimated steelworks in the southern Ukrainian city of Mariupol on Tuesday, along with a couple thousand Ukrainian defense forces, with Russia reportedly blocking further evacuations. As CBS News correspondent Chris Livesay reports, a ceasefire finally enabled the evacuation of about 100 civilians from tunnels under the Azovstal steel plant over the weekend.

That first group — rescued after two months of relentless Russian shelling of the city and the plant — were still headed for safety in Ukrainian-held territory on Tuesday.

It’s estimated that about 100,000 people are still sheltering in basements and other hiding places around Mariupol. The strategic port city has been pummelled by Russian rockets and artillery since Vladimir Putin ordered the invasion of Ukraine on February 24. It is now controlled by the invading forces, with only a couple thousand members of the Ukrainian National Guard’s Azov Regiment still holding out under the steel plant.

At least nine civilians have been killed in Russian shelling in the Donetsk region of eastern Ukraine this morning, according to regional governor Pavlo Kyrylenko.

At least three civilians had been killed during an aerial bombardment of the town of Avdiivka, Kyrylenko wrote on the Telegram messaging app.

Three more were killed while drinking water in the city of Vuhledar and three were killed in shelling of the town of Lyman, he added.

Other areas of Donetsk were under constant fire and regional authorities were trying to evacuate civilians from frontline areas, the Ukrainian president’s office said earlier.

The BBC has not been able to independently verify these claims.

HistoryLegends is a great source for a non-propagandistic following of this conflict, and he is great at restraining his biases.

I’m genuinely confused. Why all these sudden media reports that the Ghost of Kiev didn’t actually exist?

That was clear, obvious and demonstrated online back in February. What’s causing media outlets to feel the need to talk about it at all now? Well, other than one of them (The Times in the UK) actually citing the death of the mythological figure, but even there the story should be “Why are The Times journalists credulous fools?”

A: Because the MSM is usually months behind the curve of actually competent people, with the Ghost of Kyiv story being confirmed false sometime in early March.

B: Because the entire “source” for the story was some randos on Youtube attributing this one dead Ukrainian Air Force Pilot as the Ghost of Kyiv, which much of the MSM adopted, only to be expressly called out by the Ukrainian Government. Meaning they have to hurriedly “update” the story or be exposed as fools. Well, more than they already were.