A Russian soldier pleaded guilty to killing a civilian. 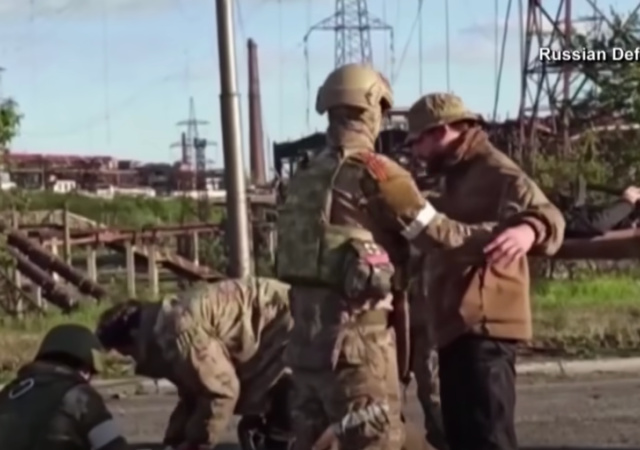 Ukraine is still holding onto the Azovstal steelworks plant in Mariupol. Russia said hundreds of people surrendered except for the top commanders.

The Russian Foreign Ministry blasted Ukrainian President Volodymyr Zelenskyy for saying it was a rescue mission:

Foreign ministry spokeswoman Maria Zakharova tells Sputnik Radio, a Russian state-operated station, that Zelensky’s statement is “a masterpiece that has come from the pen of those who create in the Kvartal 95 Studio” – a reference to a TV production company created by Zelensky before he become head of state.

“I’m left with the impression that they are writing a new series or a text for their next corporate event,” she adds, claiming Russia is behind the plan to evacuate the Ukrainian fighters from the steelworks.

Zakharova says for the Ukrainian authorities to claim it’s been a humanitarian operation organised by Kyiv “demonstrates their lies and propaganda based on the lies that they have been using all this time”. She also claims Ukraine has “learned to lie” from “American and Nato specialists”.

The pro-Russian separatists said they will send the Ukrainian fighters to court:

According to Russian news agency Tass, Donetsk separatist leader Denis Pushilin says “if the opponent has laid down his arms, the court decides the future fate”.

He says any Ukrainians who are found to be “neo-Nazi war criminals” should face an international tribunal.

Pushilin says the top commanders at the steelworks are still inside the plant and have yet to surrender, Reuters reports, citing local media.

Finland and Sweden handed in their NATO applications today:

The alliance’s secretary general Jens Stoltenberg says it is “a historic moment, which we must seize”, adding that the Nordic countries’ membership would increase shared security.

The two nations’ leaders announced their intention to apply for membership of the defence alliance on Sunday, in the wake of Russia’s invasion of Ukraine. The Swedish parliament voted in favour on Monday, with Finland’s doing the same yesterday.

Finland shares a lengthy land and sea border with Russia. Both it and neighbouring Sweden remained neutral throughout the Cold War so their applications to join Nato mark a significant change in stance.

The process could be fast-tracked to only take a few weeks but would require the support of all 30 members, ratification of which could take up to a year. The Turkish government has voiced opposition.

Finnish President Sauli Niinisto and Sweden’s Prime Minister Magdalena Andersson are due to meet US President Joe Biden at the White House tomorrow to discuss topics including the Nato applications, European security and support for Ukraine.

A Russian soldier pleaded guilty to killing a civilian:

The soldier, Sgt. Vadim Shyshimarin, pleaded guilty to shooting a 62-year-old man on a bicycle in the village of Chupakhivka in the Sumy region, about 200 miles east of Kyiv, four days after Russia’s full-scale invasion began on Feb. 24.

Asked by the presiding judge whether he accepted his guilt, Sergeant Shyshimarin said: “Yes. Fully yes.”

The trial has drawn widespread media and public interest. On Wednesday, the courtroom and an overflow room were crowded with members of the local and international news media, and the trial is being broadcast on YouTube.

The prosecutor, Andriy Sinyuk, described the hearing as an “unprecedented procedure” in which “a serviceman of a different country is accused of murdering a civilian of Ukraine.”

The precedent being set by Ukraine trying a Service Member of a co-belligerent by a civilian CT is going to have far reaching implications if allowed to stand. By all means investigate, gather evidence and try him and if convicted sentence him but not in a normal civilian CT. The US needs to push back immediately lest other Nations attempt to rely on this episode as precedent and try our Service Members for actions taken in time of ‘war’.

This is one of the many reasons I believe this is a “PR” war for other purposes ( by the Ukraine).

This “court action” actually could START a war.

A military action (regardless of what it is) is not tried in a civilian court under civilian law.

Taurus is a better judge of what is going on than the mainstream media.

Someone breaking the law is tried in court. What’s precedent setting about that?

He broke civilian law. Which court do you want him tried in, a Russian one?

You have absolutely no clue whatsoever as to what you are talking about or how this actually works.

Even by treaty ( without going into which one specifically and who may have signed it), civilian courts ( justice in any form) has no legal authority over alleged war crimes ( this includes non combat crimes such as rape even) unless there is a rare SOFA in place.

Civilian laws ( even at the philosophical level) are inapplicable to military tactical decisions.

Many “legitimate” military acts would fall under every criminal code.

Actions by military personnel of belligerent Nations in a war are not covered by civilian jurisdiction. Deviations from the applicable laws of conduct in warfare are the province of military law. Period, full stop.

A Nation seeking to undermine that or standing silent while another does so regarding the the actions in Ukraine is foolishly short sighted. They are exposing their own Military Members to the same at some future point.

Any number of wholly lawful actions during a war are absolutely prohibited by civilian law. The distinction between killing a lawful combatant during a war and murdering someone in a time of peace using the same method and in similar circumstances is not that difficult a concept to understand.

I suppose it would depend on what treaties Ukraine is party to etc.? You also have the fact that Russia has not declared war on Ukraine. Ukraine could treat it the same as if a bunch of Russians who happened to be soldiers crossed into Ukraine and went on a crime spree – which is pretty much what this war is. And why would “our servicemembers” face any more danger from a civilian court than a military court “for actions taken in time of war”?

What is Turkey’s problem, trying to put the kibosh on the Swedish and Finnish ascension to NATO???

Blackmail on their Kurdish issue. Also, Erdogan is otherwise a Russian tool, a d that should lead to Turkey’s being expelled or suspended from NATO.

I trust an explanation for Turkish support for Ukraine including closing the Sea of Marmara to the Russian Military (meaning they can’t reinforce their navy), why Turkey which is absolutely not a nation with the wealth of France the UK or Germany is shipping billions to Ukraine…..I trust a good explanation for why Putin wants that is forthcoming shortly?

Turkey doesn’t want to expand NATO because that isn’t in the interest of anybody. What does the United States or Turkey get out of it?

You are entitled to your politics and not to like Turkey you aren’t entitled to live in an alternate reality.

The commanders haven’t surrendered because they still have way more than adequate stocks of paintball ammo.

I’ll bet they changed their uniforms and surrendered as enlisted men.

“a historic moment, which we must seize”
Oh noes! They must be right-wing Republicans! Always pouncing and siezing!

Top commanders didn’t surrender so they would have families to go back home to.