American lawmakers have repeatedly warned that the U.S. risks being left behind by itChina and Russia. 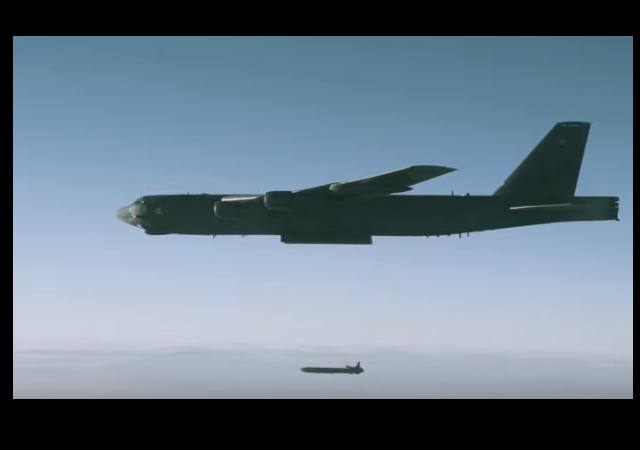 More good news from the US military!

While the US Navy recently reworked its reading list to remove woke books and include those on battle tactics and strategy, the Air Force reported a successful hypersonic weapon test.

The U.S. Air Force said on Monday it had conducted a successful test of a hypersonic weapon, which flew at five times the speed of sound.

The test was conducted on Saturday off the coast of Southern California when a B-52 bomber released an Air-launched Rapid Response Weapon (ARRW), the Air Force said in a statement.

“Following separation from the aircraft, the ARRW’s booster ignited and burned for expected duration, achieving hypersonic speeds five times greater than the speed of sound,” it said.

The system is the first successful test of an air-launched missile system.

“Our highly-skilled team made history on this first air-launched hypersonic weapon,” said Lt. Col. Michael Jungquist, the director of the 419th Flight Test Squadron and the Global Power Bomber Combined Test Force, who executed the test.

“We’re doing everything we can to get this game-changing weapon to the warfighter as soon as possible,” Jungquist added.

American lawmakers have repeatedly warned that the US risks being left behind by China and Russia. Failed tests did not help the US military’s progress, and perhaps the successful launch will lead to more success in other hypersonic projects in the pipeline.

The US military has a number of hypersonic weapons programs across the Navy, Army and Air Force but most are still in development phase and highly top secret.

However the known programs are all more conventional hypersonic weapons that strike from high altitude, rather than orbital bombardment systems that strike from space which the Chinese were revealed to have developed this week.

The only US hypersonic weapon know to have been successfully tested is the Air Force’s GM-183 ARRW which is designed to be launched from a large bomber aircraft.

It then accelerates to hypersonic speeds using of up to 15,345mph using a supersonic combustion ramjet to strike targets within 1,000 miles. Donald Trump referred to a ‘super duper missile’ while in office and this is believed to be the AGM-183 ARRW.

The Navy’s submarine launched Long Range Hypersonic Weapon is expected to be operational by 2023 and will have a range of 1,725 miles.

Even though the Russians have claimed to use hypersonic missiles in Ukraine, they do not appear to have resulted in a battlefield advantage.

China and Russia have developed hypersonic weapons, and U.S. defense officials have said that Russia has used hypersonics weapons an estimated 10 to 12 times in its invasion of Ukraine.

But Chairman of the Joint Chiefs of Staff General Mark Milley told Congress last week that the way the Russians are using hypersonics hasn’t given them much of a battlefield advantage so far.

“Other than the speed of the weapon in terms of its effect on a given target, we are not seeing really significant or game-changing effects to date with the delivery of the small number of hypersonics that the Russians have used,” Milley said.

Yeah! If it’s hypersonic, how did they take a picture of it?

You dummy, you just disconnect the microphone cable!

Yay. Now, let’s get the refineries running again, and re-start the leases on gas and oil fields.

Not now. I just spent 250k on an electric car. I want free electricity to be available wherever I go.

I remember in the same week that China supposedly launched their ‘hypersonic weapon’ last year, not to be out done, our Navy unleashed its first ‘trans sexual’ admiral. No doubt they had a ‘step back moment’.

“No doubt they had a ‘step back moment’.”

I believe we all did…

You could call it that. Take a deep breath and pinch yourself to see if you’re asleep.

You sure about that?

If you are referring to Admiral Levine then yes. Levine is a member of the ‘Uniformed’ Commissioned Corps of the US Public Health Service.

It’s a misnomer. The Public Health Service doesn’t care about the public’s health.

In fact, I had my first genuinely good nights sleep last night. No melatonin, no Tylenol p.m. The fever belts are just about gone. I even got a couple of minor tasks done yesterday that I have been putting off. All in all, I think I will be back on the road by next week. By that I mean driving to the supermarket and the doctor myself, rather than depending upon rides.

That is good. That is Very Good!

I believe that I will. Today I’m doing some Harvey things. One of those things is upgrading the hard disk drive system in a mackintosh mini.

I stand corrected on that. That ‘Rachael Levine’ creature is the head of it.

Rachael Levine is not real—she’s just a fantasy in some old guy’s mind.

The old guy is Norman Bates and Rachael is his alter ego.

“…hypersonic weapon, which flew at five times the speed of sound.”

Damn! That thing flies almost as fast as the lying words out of White House Press Secretary Karine Jean-Pierre’s mouth.

That woman will prove to be a complete train wreck. I think even the left wing press, which is a large portion of it obviously, will end up rolling their eyes and shrugging.

That’s the sort of workforce you get when your ranked hiring criteria is:
1. Marxist
2. Black
3. Gay
4. Competent

Twitter even makes 2 and 3 optional, and they’re still a dumpster fire.

Our U.S. population are been replaced by foreigners, tens of millions of them streaming over the border and through our airports, mostly from failed nations throughout the world (only 20% of California children are now white, with the rest of the states fast approaching them), but the U.S. Defense Department is fully prepared for any invasions of Russian, Chinese, Japanese and German soldiers, relentlessly pacing back and forth, between their posts, avoiding any contact with the 160 million immigrants (including their U.S. children) streaming by them.

Maybe if white couples would start reproducing again we were the least slow down the eventual takeover. I’m not saying that they should all be the Duggar family, but how about having some kids, people?

You can’t keep up with the Joneses if they live in a 3.5 million 5 bedroom house but can’t afford kids.

Roughly 45% of marriages in end in divorce and women file 80% of those. The overwhelming majority of those are not filed on traditional grounds; adultery, abuse but for ‘irreconcilable differences’.

There is a growing issue in that many, not all, women seem to have an expectation of a highly idealized version of how they select partners. The common refrain is that for a man to be highly desirable he must be 6 ft, have six pack abs and make six figures. Coupled with many women’s attitude towards men in general by the more extreme versions of feminism and being eliminated from competition for a mate by the 3×6 above many men are dropping out.

The bottom line is marriage has become dangerous for men; aggregate rates of divorce and the lopsided brand of justice in our family CT system which treat men in general and Fathers in particular very unjustly. See Johnny Depp.

Dang Chief, you must be slipping. It’s been a long time since you’ve pointed out the silver lining.

The dual silver linings are:
1. Ability to learn from the poor outcomes, bad experiences of others rather than in person
2. If personally experienced then ‘once bitten is twice shy’

Friday special on silver linings; 2 for 1

Is that the same as buy one, get one free?

BOGO requires a coupon. In store only, limit one per customer. Quantities limited. Only at participating locations.

Are they made in China?

All are sustainably sourced.

Sounds like weasel words. Does that mean they’re made out of recycled material?

Unless it’s the sort of invasion where war is declared or someone changes the law the U.S. Defense Department can’t do anything about it.

A day late and a dollar short. Maybe the Air Force and the US military should stop focusing on wokeness and kicking people out who don’t want to take an experimental vaccine.

“A day late and a dollar short.”

A brand new weapon launched from a 70-year-old airframe.

The AGM-183A shown in most of the photos doesn’t seem to have an intake for a scramjet engine like what the audio describes and other hypersonic prototypes have had. It looks like a simple rocket. Am I missing something?

Taking all the context in context — mainly, the political pressure to announce that we, too, hold a crucial card that all the other players have already lain down — one expects it to be absolutely mandatory for an announcement like this to come out as soon as possible. Which, in the world of military procurement, always means “way before it’s actually viable,” and so usually you will find that some portion of the announcement video has been deliberately, um… “fortified.”

If you want to see that sort of program in action, just look back to the introduction of the M16 early in the Vietnam era. It was “ready” and handed out to the troops nearly a decade before it was really “READY” for mil-spec activity. And even then they only had managed to correct the massive design failures, not the dozens of little annoyances that could still kill the man behind it rather than in front of it.

The protocol is so endemic that if it isn’t present in this program, I will be stupefied.

One suspects that the photo used here is a stock one. It’s doubtful that even this administration is stupid enough to show the real thing (assuming there is one).

If the weapon is actually a player and not a political ploy why announce it? Is that going to dissuade the bad guys from using theirs? Now if it was a counter to the bad guy weapons then perhaps yes. Otherwise it’s dick waving.

Our system can actually keep military things secret when it wants to. The F-117 for instance managed to stay secret for 5 years.

LOL, do you really think china and the russians have working hypersonic weapons ready to deploy, and enough of them to matter?

With anything coming from our government, suspicion is warranted. It would be legitimate if you were actually as suspicious of the commies claims….