The man at the center of it was convicted of election fraud in Virginia involving…fraudulent signatures. 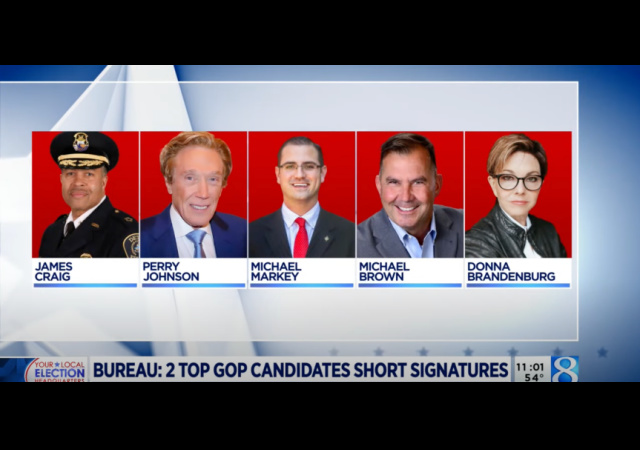 The top two Republican candidates for Michigan governor and three other candidates might not make the ballot due to invalid signatures.

Former Detroit police Chief James Craig and businessman Perry Johnson, two of the top candidates for the Republican nomination for governor, didn’t submit enough valid petition signatures to make the ballot, according to findings from the Michigan Bureau of Elections.

The bureau’s revelations Monday evening shook up the 2022 race to be Michigan’s governor, potentially leaving Republicans without their most well-known candidate, Craig, and without their wealthiest hopeful, Johnson.

If the bureau’s reviews hold, five of the 10 candidates who submitted signatures to run for governor wouldn’t make the ballot. Three other GOP candidates for governor were also found to have insufficient signatures: financial adviser Michael Markey of Grand Haven, Michigan State Police Capt. Michael Brown of Stevensville and entrepreneur Donna Brandenburg of Byron Center.

The Bureau of Elections tied the fraudulent signatures to 36 circulators and one company. The bureau does not think the candidates had any idea what happened or had involvement in the scheme.

The report only mentioned the “head of the firm” as the person responsible. It linked to articles about Michigan man Shawn Wilmoth and his company First Choice Contracting LLC. Wilmoth had some legal troubles in Florida and Virginia concerning fraudulent signatures:

The Free Press reported in 2017 that Wilmoth was a one-time officer of Signature Masters — a company hired to collect signatures for the problem-plagued Clean Michigan petition drive to create a part-time Legislature — and was convicted of election fraud in Virginia in 2011.

Wilmoth pleaded guilty in September 2011 to two felony counts of election fraud and was sentenced to two concurrent five-year sentences, with four years and eight months of the sentence suspended on the condition of good behavior and repayment of court and extradition costs, according to a 2011 report in the online publication Arlington Now. Wilmoth also was placed on probation for three years.

According to Arlington Now, Wilmoth admitted to hiring two people with criminal records who were ineligible to collect petition signatures under Virginia law and asking them to both collect signatures and sign as witnesses on dozens of petition sheets filled with signatures they did not collect.

Brown admitted he hired First Choice and had conversations with Wilmoth:

But Brown said he completed his signatures early and believes those he received from circulators associated with First Choice were legitimate. Those circulators — and all their signatures — were disqualified for work they later did for candidates scrambling to meet the filing deadline, Brown said he believes.

Brown could not reach Wilmoth on Monday night, determining the man is “in the wind.”

Craig claimed he did not hire Wilmoth or First Choice “to his knowledge.” He said he will investigate if “Wilmoth might have been involved as a subcontractor.”

Whitmer/Michigan of planned parent/hood, accompanied by an FBI directed abduction scheme/cover-up, and now this. Just a coincidence.

Gosh, why does this only happen to Republicans?
What…could…cause…this?

I know how to fix it! Just vote harder!

This also happens to liberals. It’s a campaign I.Q. test. You either do some checking internally to keep your signature gatherers honest, or you gather so many signatures above the minimum that the forgeries won’t matter. The Michigan wingers didn’t do either of those, and they got caught. Boo hoo.

Sounds like a planted poison pill to me. I mean this is the Whitmer state we are talking about. Faking conspiracies is her M.O.

So, the signatures are NOT invalid.
They found a way to pretend they are.

In the aftermath of Obamagate spy crimes, and dementia Joe child molester’s stolen 2020 election, why would ‘fraudulent signatures’ be of any concern? If Stacy Abrams is governor of Georgia, Richard Levin a ‘woman’, then these men can self-identify as legit candidates. Isn’t that how we play this political game now?

Moreover, just like self-appointed social media fact checkers, what metric did Michigan Bureau of Elections use to determine fraudulent signatures, and why should MBE be believed? What 3rd party ‘signature’ watch dog oversight was employed to keep MBE honest?

Oh my my. What a wicked web we do weave, when first we practice to deceive – spying, stealing, gas lighting, science denying…

There are not enough signatures because the Republicans are split 5 ways from Sunday.

And did anyone have responsibility to check the signatures against the voter rolls? Did that person do a background check of Shawn Wilmoth and his LLC? If they got scammed it’s almost certainly their own fault. Is this their first election?

This is so easy.

There you have it. Just think of all the problems I could solve.

I’m not sure what problem you’re solving. The system had no problem determining that phony signatures were phony. And that’s the only problem that your two points would address.

The campaigns should do it themselves. Appoint one volunteer who does nothing but verify. That way, the campaign can react. They can direct resources to where the need them, and they can at least withhold money from the paid signature outfit.

How convenient, but really if the campaigns can’t be bothered to get the small things done ……

Here’s an update on Bill Deblasio’s run for the new NY 10. Grizzly asked how he might do in his home neighborhood. FYI the Park Slope Food Co-op is a bastion of socialism in Brooklyn; the heartland of the left. I know many members who complain about the political atmosphere but keep their memberships because of the cheap groceries. But you have to work; spouses can do each other’s shifts, but other than that you can’t pay money instead of working. And everything is put up for a vote, at interminable meetings that parents with children just can’t make time to attend.

If I lived there, I’d try to find out who gets exempted from working. I’m gay with multiple sclerosis, with doesn’t prevent me from working for a few hours, but I’d play it to the hilt. Maybe I could get them to sing folk songs, at least until they saw the guns. LOL

This absolutely reeks of set-up, and stupidity.

As elections lose legitimacy, get used to things like this.

But when it’s voting time signature matching will happen,
Right?

Soooo … it’s the Republican candidates who have invalid signatures … sure! And of couse it’s legal to retroactivly declare signatures invalid for something that happened afterwards … sure! Cheat much, Michigan?

A long, LONG time ago — 44 years ago, to be exact — I gathered signatures for the Libertarian candidate for California governor. I did this in San Francisco for 25 cents ($1.10 in today’s money) a signature until I came to my senses and returned to college.

I might have been the only honest signature gatherer. Really, it never even occurred to me that I could simply forge the names and addresses, given that we were paid at the end of each day, with no double checking.

Got a good feel for the streets of S.F. circa 1978, and the best marks for signatures. I divided the city into five main groups: businessmen in suits, secretaries on lunch break, Chinese pedestrians, derelicts, and gay men. The businessmen always wanted more information, which quickly led me to avoid them.

The Chinese didn’t speak English, so I avoided them too. The derelicts babbled and drooled. Nixed them. The secretaries took pity on me and signed. Plenty of quarters. The the Castro was like a quarter-slot jackpot. I looked like a younger, scrawnier version of Joe Buck in “Midnight Cowboy.” Quarters like crazy, and phone numbers.

Anyway, if a candidate relies on paid signature gatherers, they’d better get two or three times the minimum and/or do the spot checking that they didn’t do in S.F. in 1978. I laugh at any complaints.

Every major Republican just happens to use the same vote gathering firm, and it just happens to gather supposedly invalid signatures for all of them? This stinks of enemy action.

Does this firm only work for Republicans? How about auditing the signatures of every candidate it did work for?

I don’t know how signatures are verified, but they should be.

They were, and they were found bad. This part of the process isn’t what needs fixing.

Can’t even ensure that signatures are collected property even if their political life depends on it? Kinda makes you wonder how many certified dinks there are in the Republican party. You can almost hear the chorus of sustained laughter from the Left. I think it’s a good one myself.

The same thing happens to liberals. Nominating petitions and initiative petitions fail for lack of verified signatures all the time. The zealots and/or paid gathering outfits don’t do a good job (and sometimes not any job) of random sample verification, and fairly often get disqualified.

However, Tudor Dixon is a solid candidate. I interviewed her on my radio show. You can listen to it at the link below at the 1:42:00 mark.

Why “obviously shady?” The campaign itself should have done random spot checks before turning in those petitions. Radio nutcase, the same thing happens to liberal candidates and voter initiatives all the time. Please stop chewing them mushrooms and accept the fact that your fave (who I might like, for all I know) didn’t get enough signatures. I hope she didn’t pay the shysters who forged all those signatures.

Okay, if the signatures are invalid, nothing says the voters of Michigan can’t do a write in ballot.

Please tell us the last state governor elected by write-ins. Thanks!

The Arlington petition drive in 2o1o that resulted in Wilmoth’s conviction was very dirty. The heads of the police and fire unions were angry with the Arlington County Board for protecting the taxpayers and not giving into their demands. So, they started collecting petitions to change Arlington’s form of government from a county manager structure to a different structure that would have board members run from districts rather than at large. The collection activity was fraudulent in many ways, and Wilmoth was quickly convicted. It is ironic that critics attack Democrats for encouraging election fraud and being very pro-union. Yet, here the Democratic town fathers pressed to have a prosecution of the signature collectors hired by the unions.