As our article in White Rose Magazine details, in the nearly 21 years since the Durban Conference, American Jewry’s alphabet soup of organizations has yet to counter campus anti-Semitism and anti-Zionism effectively. 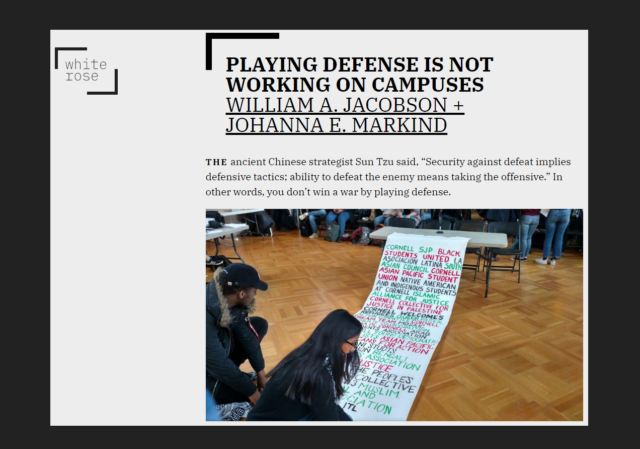 That’s the theme of an article William A. Jacobson and I wrote for White Rose Magazine. The article, Playing Defense Is Not Working On Campuses, begins this way:

The ancient Chinese strategist Sun Tzu said, “Security against defeat implies defensive tactics; ability to defeat the enemy means taking the offensive.” In other words, you don’t win a war by playing defense.

Major Jewish and pro-Israel organizations have reacted to specific campus incidents of anti-Semitism (usually masquerading as anti-Israelism), such as student government boycott resolutions, but have consistently failed to counter the growing narrative that Israel and Jews are racist colonialists. That false narrative has now been joined by a related one, that Israel and Jews are white, anti-people-of-color oppressors, a narrative often promulgated by anti-Israel activists deeply embedded within “social justice” and Black Lives Matters movements.

Both narratives have become primary weapons against Israel. Rather than disarming the narratives, establishment groups too often simply deny the former and pledge support for the latter “anti-racism” movement out of a sense of progressive solidarity—solidarity that is not reciprocated. Below we explore the trajectory of these narratives, and how groups like the ADL, which promotes progressive solidarity, have made the problem worse instead of better. 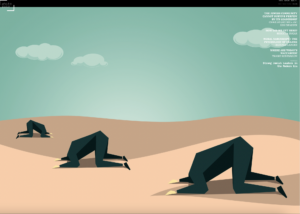 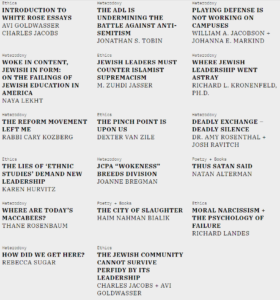 The article details the rise of BDS anti-Semitism during and after the racist 2001 Durban “anti-racism” conference, which peddled unhinged, slanderous attacks against Israel. We illustrate the spread of anti-Semitism (usually disguised as anti-Israelism) to colleges and universities across the US. The article explores anti-Israel and anti-Semitic tactics employed by BDS advocates. Rather than simply advocating for Palestinians, BDS supporters often actively suppress pro-Israel speech and harass Jews.

Most importantly, we discuss how the Jewish community has responded to these incessant, increasing attacks. “Responded” is the operative word. Established Jewish organizations have generally failed to take the offensive. We particularly draw attention to the Anti-Defamation League’s absence from the field since current CEO Jonathan Greenblatt took the helm in July 2015 – although this may now be changing, given some recent statements by Greenblatt.

That’s the nutshell version. We encourage readers to read the entire piece, as well as the other fine articles in the magazine’s current issue. The overall theme of the issue is Jewish leadership’s failure to address the problem of campus anti-Semitism.

Bringing Palestine apartheid week to campus, exposing the shameless bigotry against Jews in areas controlled by the Palestinian Authority and Hamas

The good news is that, at long last, a Jewish group has emerged that is beginning to think out of the box and go on the attack. Back in 2016, the grassroots Students Supporting Israel set up a large inflatable Pinocchio doll at Columbia University during “Israel Apartheid Week” to call attention to the dishonesty inherent in the Israel-bashing exercise. It was later ordered taken down.

This year on several campuses across the US, SSI launched a counter-program called Palestinian Apartheid Week.

For the first time ever on campuses, our movement will be highlighting the apartheid policies of the Palestinian government, including the systemic ethnic discrimination against Jews in Palestinian-controlled territories, in a campaign that begins today…

This is our time to take control of the conversation and control the narrative on campus. It is time for us to start talking about real Apartheid, not in Israel, but the Apartheid that is practiced by the Palestinians against the Jews…

Why are we hosting these events? Those who care about protecting human rights should be shocked by the abuses taking place within the Palestinian-controlled territories…

For starters, the significant sign of an apartheid society is the physical separation of groups. Unlike in Israel, there is no mixing of Arabs and Jews in Palestinian-controlled territories. Palestinian officials have instituted policies to ensure that Jews do not live beside Arabs in any of their territories, and if Jews do, they will be chased out.

Jews cannot own land in Palestinian-controlled territories. Under Palestinian law, selling land to a Jew is considered treason and is a punishable act…

“We want to move from defense to offense,” explained SSI’s president and founder Ilan Sinelnikov. “We want to be the organization that controls the narrative and controls the conversation.”

Bravo. We wish SSI much success, and hope many other Jewish organizations and community members will join their project.

In other words, don’t be the Republican Party on ANYTHING.

The rinos are the real enemy, not the left.

No, it’s the left. The real problem are the people calling anyone who disagrees with them, or with Donald Trump, a RINO. They weaken, not strengthen, the party. They reduce the chances of winning. They seek an all-or-nothing victory, in which case they will get nothing. Or at least stop until your brand of Republican has 60 seats in the Senate, 51% of the House, and holds the presidency. Until then, just shut up. Compromise on some things is necessary, even if it’s disappointing. The world is not a Legal Insurrection chat room.

There is little point to “winning” if the party of elephants accepts and accedes to everything the left desires, as it has done most recently in sending untold billions to the Ukraine money laundering operation.

The two parties exist to make you think you have a choice in governance, but their endgame is the same.

My problem with Palestinian Apartheid Week is it still cedes the term Palestinian to the Left. Historically the term Palestine and Palestinian referred to Israel and the Jews, and was variously a Greek play on words – wrestler (Palé) versus the land of Palaistinê, or an attempt by the Romans to eliminate everything Jewish from the region – Syria Palaestina rather than Israel or Judea.

Referring to the descendants of the Muslim Arab invaders who seized the territory about 640 AD as Palestinians conflates them with the original Jewish inhabitants of the land – or supports a Jew free narrative. Yes the land mostly remained under the control of various Islamic empires until it regained independence in 1948 – and then only after fighting Arab forces who sought to destroy the nascent state, but how is one to reconcile the Arabs claiming the land as their’s with the Jews whose land it is?

I think holding land since 640AD gives people some level of title. Entire continents have shifted in ownership since then, and almost nobody is claiming that (e.g.) America and Canada should evict all the European and African immigrants for the past few centuries.

Israel’s nation state law is a bad thing. The Palestinian rules that discriminate against Jewish people are bad things. It’d be lovely if people could stop bleating on about things that happened before Islam was even a thing and start talking sensibly about actual possible options to resolve their differences.

People on all sides.

This has been done many times by Israel and has *always* been rejected by the Palestinians. The UN tried to establish a Palestinian state alongside Israel in 1948. Arabs rejected this vowing to “drive the Jews into the sea” only three years after the Holocaust. At the end of Israel’s war for independence in 1949 the West Bank and Gaza were in Arab hands but they did not lift a finger to establish the proposed Palestinian state. So the fault for there not being such a state is 100% Arabs’, 0% Israel’s. Jordan’s King Abdullah (great-grandfather of the current King Abdullah) wanted to settle the matter then and recognize Israel but was assassinated for it.

Then in 1967 Arabs publicly vowed to “finish what Hitler started”. But they didn’t. Israel did not advance on the West Bank until it was attacked by Jordan because King Hussein did not want to end up like his grandfather. After the war the expectation was that Arabs would finally try to negotiate with Israel to get the land back. Instead their united front was the three nos – no peace, no recoginition, no negotiation.

After Sadat replaced the Soviet puppet Nasser who had instigated the 1967 war he reached out sincerely to Israel in peace, the first Arab leader to do so and by far still the most significant. He went to Israel to address the Knesset and the result was the Camp David accords making peace between Israel and Egypt. But he ended up like King Abdullah, getting a bullet through his head for his trouble.

In 2000 the Palestinians were offered nearly everything they had been asking for including SHARED CONTROL OF JERUSALEM. Instead they decided they would rather blow up Jews going out for pizza. Now the most prominent political force among the Palestinians is Hamas, an explicitly antisemitic organization whose charter calls for the murder of *Jews*. Not Israelis, Zionists, or “settlers”. Jews. Allegedly they scrubbed this passage 4 or 5 years ago but it was clearly done under duress and the sincerity is questionable to say the least.

OVERWHELMINGLY the fault for the perpetuation of this conflict lies with Israel’s enemies. It sucks for Israel to be a garrison state and nearly all Israelis would love to settle it. But their hearts have been hardened by nearly a century of fanatic Jew-hatred on the other side.

There was never an independent Muslim country called Palestine, ever

Say it again and keep saying it, brother. Now that is going on offense.

You really are a unique archaeologist I had no idea there was a nation called Palestine in 640 a.d. I also had no idea that the land wasn’t part of a wide variety of empires, I thought before Israel there was the Ottoman Empire, and I thought before that the Egyptians ruled it, and I thought there was a period of the Crusader States, and that prior to that another Arab Empire, and prior to that I was under the impression it belonged to the Byzantine Empire.

You exterminated all of your credibility with that statement about ownership since 640.

Are the organizations that are supposed to be advocating for Jewish people actually doing so? Or, have they been infiltrated by people who have bent their organization toward opposing those that oppose communists?

Every leftwing organization that proclaims some purpose is actually just a front for the far left and will violate their stated principles to support the leftwing narrative. In California it was Asian-American advocacy groups that supported a constitutional amendment to limit Asian enrollment in college that made this clear as a bell. Since then it has become clear as a bell that no matter the cause, the real purpose is propaganda.

Best way to fight this is via state legislatures using their power to influence the institutions against intersectionality.

Join the JPFO. The Palestinian cause is so trendy and lame. The “activists” in Western countries who glom onto it for radical chic cred are so damn annoying.

Progressive as in ideological or monotonic?

This is excellent. Going on offense is exactly what is missing. “Palestine” itself is a lie and needs to be exposed.