“We have to take very seriously the threat which an illegitimate, far-right Supreme Court poses to gun safety in our country” 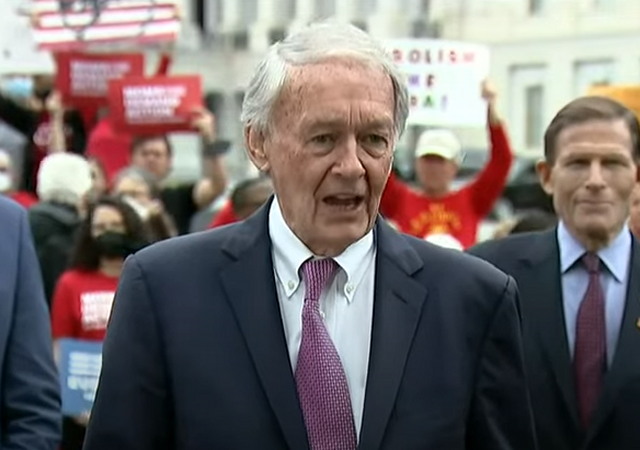 U.S. Senator Ed Markey (D-MA) and several other Democrats spoke on Thursday morning about the recent shooting in Texas, and Markey made some shocking comments about the U.S. Supreme Court.

Zachary Leeman of Mediaite has details:

Sen. Ed Markey (D-MA) suggested expanding the Supreme Court in a Thursday speech, claiming the court is currently “illegitimate” and “far-right” and could pose a threat to any potential gun control legislation passed by Congress.

At a press conference where he and other Democrats called for action on gun control in the wake of the Uvalde, Texas elementary school shooting, Markey targeted the Supreme Court on top of Republicans, the NRA, and former President Donald Trump. Trump appointed Supreme Court Justices Neil Gorsuch, Amy Coney Barrett, and Brett Kavanaugh.

“We have to take very seriously the threat which an illegitimate, far-right Supreme Court poses to gun safety in our country,” the senator said. “We have to expand the Supreme Court to get back the two stolen seats that the Republicans and Donald Trump took from the American people.”

Congress has a moral responsibility to address gun violence, but Republicans refuse to act. I am standing with activists and advocates from @Everytown to demand that we abolish the filibuster and pass comprehensive gun safety legislation now. https://t.co/nbgsLWTcIp

Ed Markey uses the Texas shooting to.. attack the Supreme Court and push for court packing.

If you're one of the people who wants Washington to "do something," on gun violence look at people like Ed Markey who want to shift the debate to every other political goal they have. pic.twitter.com/GumsYlR02y

Illegitimate? Stolen? Isn’t that conspiracy theory talk, according to Democrats and the media?

Remember a few weeks ago when Chuck Schumer held a pointless vote on abortion to force everyone to show which side they were on?

See if you can spot the operative phrase in this report from FOX News:

In remarks to supporters from Moms Demand Action and Everytown during the rally outside the Senate, Murphy also emphasized that Democrats will make Republicans take difficult votes if they don’t play ball on gun reform.

“We are going to force people to tell America which side they are on,” Murphy said.

A rowdy crowd a few hundred feet from the senators chanted “now” and “action,” demading that the Senate – and Republicans in particular – pass some form of gun legislation.

The Democrats will dial anything up to 11 if they think it will help them in November.

Looks like the left really does want a civil war.

I am becoming convinced of that daily.

They believe they have enough power within the government to absolutely impose their will on the rest of us. Covid proved they do.

A civil war to them isn’t a shooting war in trenches: it’s simple martial law. Their puppet Biden is just the puppet to impose it.

geroni you said what I was going to after reading this

Well, yes. There is one illigitmate justice. Her name is Ketanji Brown Jackson.

Is she a woman? She doesn’t know, because she’s not a biologist.

She’s not a f–king Justice, either. What a catastrophe.

The only illegitimate person I see in office right now is the pedophile-in-chief.

Just to be honest, the question of the legitimacy of our government has been coming up for some time. When the Left and their Institutional Republican allies ignore the Constitution at will, when numerous court decisions say that the Federal government is not obligated to tell citizens the truth, ever, or administrative law functionally over-rides statute law or the Constitution, the Social and Political Contracts are shaky as all get out. While the Left has always functionally refused to be limited by the Constitution, for them to openly declare government illegitimacy is another non-retractable step. Especially since a politically significant portion of the population believes that the 2020 general election was stolen by fraud by the the Left . . . and things do not look much better for the 2022 election in 6 months [the weaknesses in the system have not been fixed and the Institutional Republicans deny they exist], we are getting closer and closer to Thomas Hobbes’ State of Nature.

Illegitimate? If views the composition of the CT as being illegitimate wouldn’t they be equally illegitimate on every decision and not simply 2nd amendment? If so shouldn’t he begin working with HoR to create articles of impeachment, work for passage then transmit to Senate for trial?

He could simply draft and submit legislation to expand the CT to his preferred number. He seems very impassioned based on his language but his actions don’t match his rhetoric. So as, usual, a d/prog is talking about a narrative to generate fundraising and gin up their base.

Will he be submitting a constitutional amendment to change the provisions of the 2d amendment as it now stands? Probably not,; he knows that will not be embraced by the population. These guys cannot even pass meaningful legislation when their party holds both Congress and Presidency. They have to file frivolous lawsuits and wait for a compliant judiciary to change the existing laws,with the aid of DOJ taking a dive…

Where’s the Disinformation Governance Board when you need it?

Of course, though, he’ll demand that we respect every SCOTUS rulong once he’s adjusted the Court to his liking.

Sen. Ed Markey was stolen and must be replaced by a legitimate senator.

As always, Gun Control, has never been about guns. It’s all about control, everything, all the time. The Leftists know how to live your life better than you.

I recently finished reading a book about the history of Ukraine, and am now about 1/2 of the way through a 1,500 page account of the Russian Revolution. Let me tell you, brothern and sistern, when one part of the governing body is proclaiming and attacking other parts of the governing body as illegitimate, bogus as such claims may be in actuality, they erode the loyalty of the public at large to the existing order. Taken to the extreme, this leads to the overthrow, which no one sees coming, of the entire apparatus.
The result is a power vacuum from within which only the group that is the most ruthless and disciplined, and determined to seize power, can overcome the majority and impose its will. See Bolsheviks after the February revolution, which had been about installing a representative government to replace the autocracy (Tsars) that had ruled for several centuries, and forced the Tsar’s abdication. See Lenin who, supported by only a tiny number of acolytes, in 8 short months, installed a Communist dictatorship, immediately banning all other parties and political gatherings, seizeing control of the press, and suppressing all other means of public discourse.
Markey needs to STFU about things that are above his mental capacity to grasp, sort of like a large firework that can easily blow up in one’s fingers.

Somehow America needs a national divorce. Our sides are beyond reconciliation.

Senator Markey is an example of why some, but not all, Massachusetts residents are properly called “Massholes”.

Why can’t Congress Critters stay perched on their own branch? Separate but equal is out the door.

All hands on deck!!!! This is no time to be dickering over his not being perfect. He is the only one drawing major fire from the Uniparty estabishment. Take him down and DeSantis will be next. He is NOT ready to win without Trump and Trump will need him at his back. WE need them both right now!

We’ve never had two superstars on our side. Let’s not blow it. It’s almost certainly our last chance.

Some Senators have a background as captains of industry or Ivy-educated top attorneys. What did Markey do before first running for office? He drove an ice cream truck in Lexington Massachusetts and was known as Eddie the Ice Cream Man. A true soulmate to Joe who loves ice cream and children. It is said that Markey had an ice cream bell installed in his limo and rings it when visiting constituents back home.

He should’ve locked up in the DC gulag for good reasons.

Per the sick party: It’s illegal to question elections.

Has anyone checked the the basement of the congress for PODS?

It’s rhetoric like this that is truly dangerous. When you call the other side illegitimate you are saying they are not worth talking to, reasoning with, or worth working together with to come up with a solution. It also kinda passively oks bad behavior towards those who you malign, potentially increasing violence rather than reducing it.

Markey is a genuine dim bulb, who has NEVER had a real job. His only positive is his record of complete ineffectiveness, he’s a buffoon.

By that thinking, every SCOTUS nomination is “stolen” because one side in an election has to lose. Ergo, he’s a constitutionally illiterate moron who shouldn’t even exist across the street from an elected office.

translation: we have to pack the supreme court to neuter it for when we remove the second amendment in order to disarm as much of the population as we can. this will be necessary for the revolutionary policies we put into place, that the American population will be prostrate when we enforce the new agenda.

Good luck Markey (dumbass, Mass). You’ll need it if you think Americans are going to line up and hand over weapons.