How much do you want to bet that they’d be all over it if someone wanted to “protest” outside of the homes of the leftist justices? 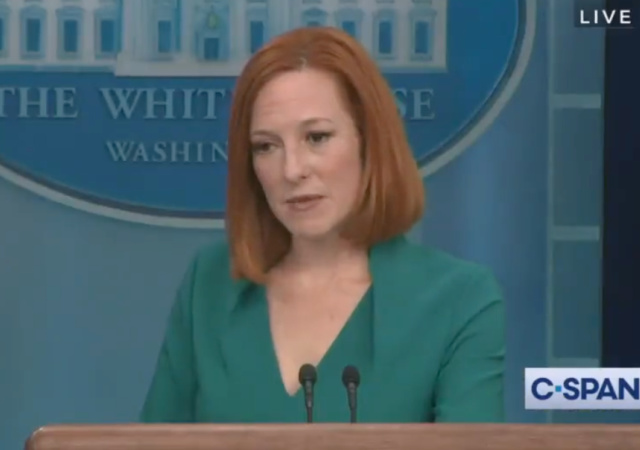 The left-wing group Ruth Sent Us posted the addresses of the six conservative justices. They want people to “protest” outside of their houses.

You would think the government would say something, right? The group

Doocy: "Some of these justices have young kids. Their neighbors are not all public figures, so would [Biden] think about waving activists that want to go into…neighborhoods in VA and MD?"

Doocy: "Is [protesting outside the homes of justices] the kind of thing [Biden] wants to help your side make their point?"

Psaki: "Look, [his] view is that there's a lot of passion, a lot of fear, a lot of sadness…We want people's privacy to be respected." pic.twitter.com/rSQoY4gMSP

Doocy: “He doesn’t care if [abortion activists are] protesting outside the Supreme Court or.. someone’s private residence?”

Psaki: “I don’t have an official…position on where people protest…We want it…to be peaceful….[They’re] protesting is b/c women…are worried[.]” pic.twitter.com/2K5hC5Il9u

Speaking of abortion…has our devout Catholic president changed at all when it comes to limits on abortion?

Doocy: "So, does the President support abortion up to the min — the moment of birth?"

Psaki: "[He] has spoken about this many times, Peter, & I would refer you to his own comments about abortion & a woman's right to choose, & make decisions about her body w/her doctor" (9/9) pic.twitter.com/IlD3L0ilmS

Psaki uses her press conferences to engage in a kind of lying that Joy Behar pioneered. It’s called “red hairing”. I’m sure everyone has heard of it. Throwing “red hairings” to mislead when answering questions. It is used as a verb and a noun.

When the shoe’s on the other foot, point your finger and say, “Hey, what’s that over there?”

“Real Bitch” Psakki is leaving very soon. Like Obama, Bill Clinton, Pelosi, Schiff: she disgraced her office to the point it will never recover.

I think Psaki is here downvoting everything you post.

It serves the court right for legislating back in the day. It now lives with that tradition.

Can you imagine people wearing MAGA hats peacefully being outside anyone’s home-let alone a Supreme Court justice? Mass arrests, family assets frozen, employers harassed to fire them, teacher’s unions harming the children. Just scratching the surface of what would happen.

When do we hit bottom?

We have, you haven’t been paying attention

I don’t even think we’re close.

The ABA is an evil organization that fully supports the baby killing party!

She’s a monster and someday…

I can already see the MSNBC story: The reporter will be standing in front of Justice Alito’s burning house, and he will say:
“A mostly peaceful protest took place here today.”

The progressive left’s reaction to the SCOTUS leak and their unbridled love for abortion makes me believe they are on a highway to hell; while we try hard everyday to lead our lives on a staircase to Heaven.

Nice, the Biden admin is in favor of escalating tensions. They don’t have the humility to realize that the worm always turns. No crying when it does.

If you think OBAMA’S press secretary and pathological liar like “Real Bitch” Psaki is bad, here’s the CNN shill who’s coming to replace her:

1. Jean-Pierre worked for radical organization MoveOn.org. MoveOn.org, launched in the late 1990s to oppose the impeachment of President Bill Clinton, pushed, ironically, for the impeachment of President Donald Trump, abandoning its former principles. The group also infamously accused General David Petraeus, then commanding U.S. forces during the Iraq War, of betraying the country. Jean-Pierre worked for MoveOn.org from 2016 until the 2020 presidential campaign.

2. Jean–Pierre has a history of anti-Israel radicalism. In 2019, Jean-Pierre applauded Democratic presidential candidates for boycotting the annual American Israel Public Affairs Committee policy conference in Washington, DC, a prominent pro-Israel gathering. “You cannot call yourself a progressive while continuing to associate yourself with an organization like AIPAC that has often been the antithesis of what it means to be progressive,” Jean-Pierre wrote.

3. Jean-Pierre once said that no one who has been merely accused of sexual misconduct should seek public office. Jean-Pierre told Jake Tapper on CNN’s State of the Union in 2017 that even if there was no corroborating evidence, and nothing had been proven against the accused, the mere existence of the accusation should be disqualifying. Ironically, she went on to work for Biden, even after he had been credibly accused of sexual misconduct by former aide Tara Reade.

4. Jean-Pierre is married to CNN anchor and correspondent Suzanne Malveaux. Jean-Pierre is only the latest example in a pattern of high-level personal ties and romantic links between Democrats and the media, as documented by Breitbart News editor-in-chief Alex Marlow in his 2021 blockbuster Breaking the News: Exposing the Establishment Media’s Hidden Deals and Secret Corruption. CNN will continue to be, in effect, the Biden administration’s communications shop.

5. Jean-Pierre stoked racial divisions and fears when Donald Trump took office. She told Bill Maher on HBO’s Real Time, “I think the thing to understand is that, if you are not white, male, straight, you are — you fear a — Donald Trump’s presidency because there is no place for you in a Donald Trump’s presidency.” She later claimed that Trump wanted to put a “whites only” sign on the Statue of Liberty, and claimed Trump had been a lifelong racist, despite evidence to the contrary.

So just another RACIST. Great. These are the people dividing this country, and it all started under the Great Divider…..Obama. He is giddy with his plan falling into place.

One thing holds true on a house built from cards….sooner or later it will be destroyed by the hands that built it.
That is when civil war breaks out.

So insurrection is fine if it is something the Left approves.