Pro-Abortion Activist: Mothers Should be Able to Abort Children After Birth

Pro-Abortion Activist: Mothers Should be Able to Abort Children After Birth

“I believe in whatever the woman wants to choose to do. That’s her choice.” 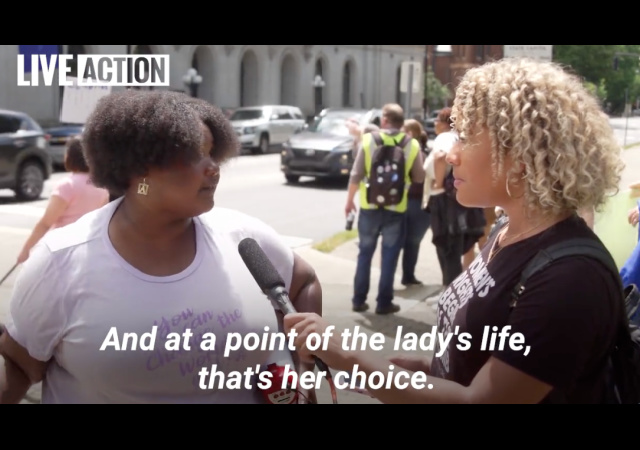 Reporter: Do you believe in abortion after birth? Would you support that?

Pro-Abortion activist: I believe in whatever the woman wants to choose to do. That’s her choice.

Reporter: At any point of the child’s life.

Pro-abortion activist: And at a point of the lady’s life, that’s her choice.

Reporter: To kill another person’s body is.

Pro-abortion activist: It’s going to always be her choice.

Reporter: Even after the baby’s born.

Pro-abortion activist: Is always her choice.

Reporter: I can kill my two year old.

Reporter: To kill their child at any point.

Do you support abortion after birth?

"It's always a woman's right to choose"

At any point in the child's life?

"It's a woman's right to choose"

If a preborn child can be killed, we are all at risk

Kill them at 2 years old? Her choice?

When God is removed from one’s political life, something must take its place. Man is elevated to the job.

What is the next step sacrificing infants in the fire to honor their woke religion?

When only groups not individuals have RIGHTS then a human life means nothing if so determined by the mob.

There are diverse precedents for reproductive… sacrificial rites held for social, redistributive, clinical, and fair weather causes. The Pro-Choice “ethical” religion denies women and men’s dignity and agency, and reduce human life to a negotiable commodity. The Twilight Amendment (emanations from penumbras) has been the source of liberal excess and treachery.

It’s a misnomer. You don’t go there if you plan to be a parent. They only cater to peple who do not want to be parents and their plan is always the same: kill your baby.

Man is never elevated when God is removed, Satan is.

Quite right. Man only believes he is and acts accordingly.

Brains dulled by alcohol or drugs and 12 years in government schools, plus a steady diet of reality TV. Forget critical thinking; they’ve lost the ability to think on the most basic level.

Mini blame the schools for that. Where are the parents?

If the last 2 decades are any clue, advancing their careers, building bigger houses and more expensive cars and remortgaging their homes to use ‘equity’ to pay for it all while the kids are in school and soccer practice etc.

I think the next frontier in abortion politics will come after Roe is gone – sole leftist states will make some abortions mandatory. If there is no right to an abortion, there is also no right to not have an abortion. If a State makes pregnancy dependent on getting a state license, and someone has an unlicensed pregnancy, then the State has a right to terminate the baby.

The problem with this slippery slope argument is that in any scenario where it comes true, the existence or nonexistence of Roe is immaterial. For example, the Second Amendment shows zero signs of being repealed, and yet a fair number of states already practice analogous outrages upon guns and gun owners, and have for quite a long time.

No, it doesn’t work like that. There are limits even to the states’ general police power. States can’t just do whatever they like.

Kill them at 2 years old? Her choice?

No more so than it is before birth. So at least she’s consistent.

You have to admit that that kind of consistency does have it’s charm. For instance, Momma finds out her 15-year-old is a drug dealing gang-banger. One behind the ear, problem solved.

No one cares I understand be that stupid.

This woman is either incredibly stupid, or she is completely out of her mind !
What she is agreeing to is MURDER, any way that you look at it. She is not an “activist”
she is an INSANE activist.

Sickened by this? Most definitely. Surprised? Not in the least.

Once it’s acceptable to kill the unborn, termination of toddlers is a next step. There are people who would allow old folks to die, soon the ages and criteria for will expand. Low regard for human life causes many problems, some that may not be foreseen.

Not just unborn, not just babies or toddlers, not just the elderly – look for the elimination of all kinds of “undesirables,” such as Down’s syndrome kids, “religious nuts,” people who question “the system,” political opposition, MAGA deplorables, etc, etc. The list is endless.

Which is what makes the Second Amendment so important. It’s much harder to load people into boxcars while they are shooting you in the face.

That is exactly how Hitler felt ! He wanted to get rid of every person that he thought was “Undesirable”, and of course that included the Jewish people among many others.

How. pray tell, is the Democratic Party significantly different from a group we would unhesitatingly call a wackjob cult?

Well first of all they are not ‘democratic’.

It’s bigger. Much bigger. That’s the basic difference. Once a cult grows beyond a certain size you can no longer dismiss it as a mere cult, and have to deal with it seriously.

These people are sick! The latest sonogram technology provides parents with 3-D pictures of their growing fetus. By 12 weeks, the fetus is fully formed. How ghoulish these pro-abortioners are. They are murdering their babies!!

“Mothers should be able to abort children after birth.”

No need to stop there. Abort people in foster care, nursing homes and homeless shelters.

But whatever you do—-do not stop the flood of illegals crossing the border. Abort your children and we will be able to send more baby formula to the border.

No. DIdn’t you hear her? It’s the mother’s choice, not anyone else’s. So once the mother is dead there’s nobody who can choose to abort the child.

I identify as their mother.
There, fixed the problem.

So grandma can take out the mother and raise the grandchild. Mom says she’s OK with it.

Couple in SC starved their baby girl. Was born healthy at 6.5 lbs two years later she passed away and weighed 11 lbs. Skin and bones said the EMT’s is this oka with cretins like this?

They should have asked whether dad could do the same, since “my body” is no longer applicable.

Note that in some countries infanticide is a separate crime from murder, applicable only to women, with diminished penalties. How’s that male privilege going for you, guys?

I wonder if she would be in favor of altering the equation just slightly regarding choice post birth, since at that point there is a separate person not specifically reliant upon the mother? Shouldn’t her position be altered to reflect that fact by changing the terms? Substitute ‘mother/woman’ for Parents/guardian and ‘child’ for dependent/ward.

Under this change any person that was dependent upon another would be subject to termination at another’s whim. For instance those who accept govt assistance; aka welfare, school lunch subsidies, Sec 8 housing, home heating assistance……anyone who is a ‘burden’ to others in the sole opinion of those others.

I’m pretty sure she hasn’t fully thought through the logical conclusion of her arguments.

She would respond to those questions with the same robotic, scripted words.

Not only that, but she doesn’t believe in either logic or conclusions.

She didn’t arrive at her position through reason and therefore cannot be reasoned out of it. She is the definition of unreasonable.

Another way to describe people who reject reasoning, observable facts and logic in favor of their preferred fantasy is insane.

A kid is not an Amazon delivery. If they really believe this detritus they are one generation late.

Perhaps someone either female or identifying as a birthing person could adopt Brandon, Horizontal Harris and Pelosi then…. 🙂

How ignorant and blind are they, that they think “aborting” a child after birth is anything but murder.

It started as hyperbole, then they started to believe it?

In the old days mothers would put defective or unwanted infants in the forest for the animals to eat. Same as it always was.

So black lives DON’T matter after all?

To this piece of garbage human NO lives matter !

These are the logical consequences of their arguments. The left is a malignant, anti-life curse on our society.

This is what fanaticism looks like, and hers is a religious fanaticism (just not one for any good religion).

I guess that’s one way not to quibble over the line of life vs non-life. Let’s just obliterate the need for the distinction by sanctioning infanticide as a “woman’s choice”

Rebellious teenager? No problem! Just abort and you do you!

Could we find her mother and arrange it?

This is what happens when you have no moral foundations in your life.

When a woman elects to have unprotective sex and as a result gets pregnant, they become responsible for that baby’s life! They have no right to murder that child without being arrested for that murder. Some feel there should be exceptions due to rape and a mother’s/baby’s health/medical issues. That warrants a different discussion.

What is this “responsible” thing of which you speak? No one of the Left can be held “responsible” for anything they do. It says so in the Leftist playbook.

There’s nothing new about this. This was the law in Rome, except that it wasn’t the mother’s right, it was the father’s. It was perfectly legal for a man to kill his own children, no matter how old they were. As Bill Cosby used to say, “I brought you into this world, and I can take you out”. So this woman wants to go back to that, except with the mother in charge. As she says, “at any point in the lady’s life”, not, as the reporter asked, at any point in the child’s life. Because hopefully the child will outlive the mother, and once she’s dead the child will finally be free.

This is essentially a matriarchal society with men as peripheral. So, one could see this as solely a “woman’s choice” although that choice goes back to insemination. Uncle Sam has become the non-judgmental family member footing the bills. So, letting the kids out to be feral is HER choice.

In a Barbie world, Ken is just another accessory.

Did you hear there’s a new Divorce Barbie?

It comes with all of Ken’s accessories.

I have a list.
Let’s start with Pelosi.
Better late than than never.

Here’s another acronym that applies to “people” like this:

Hanged By The Neck Until Dead

Can these pro-abortion activists be any more brainless or just flat-out stupid??? These people have only one mission, which is to cause dissension and division where ever they go. They sopot ignorance like this because they believe this tripe or they are saying this feces in order to get paid by Planned Parenthood.

I don’t like abortion, but I’m okay with a 15-week restriction. Not because I favor it, but because I tend to seek the middle ground even in difficult situations.

This? It’s sick, loathsome, disgusting, depraved, and on and on.

Someone needs to get that woman’s mother on the phone. She needs to kill her daughter. Now.