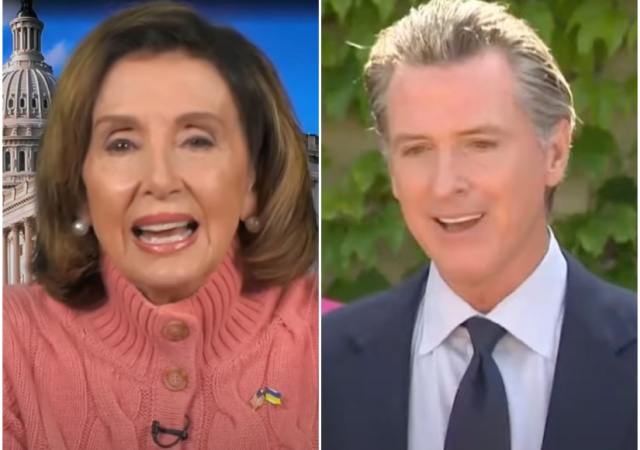 ‘Democrats have failed to target Republicans,’ Newsom said of his own party during public remarks on Wednesday.

‘Where is the Democratic Party – where’s the party?’ he pushed. ‘Why aren’t we calling this out? This is a concerted, coordinated effort and, yes, they’re winning. We need to stand up. Where is the counter offensive?’

Pelosi, who has represented the district encompassing San Francisco since 1987, pushed back on the California Democratic governor during an interview with CBS Face the Nation on Sunday.

‘I have no idea why anybody would make that statement unless they were unaware of the fight that has been going on,’ she said of Newsom.

Meanwhile, Newsom and the rest of the state’s leadership are going all in to make California a “Sanctuary State” for abortion.

“What keeps me up at night, really, is that folks aren’t going to be able to get here,” Lisa Matsubara, vice president of policy and general counsel at Planned Parenthood Affiliates of California, told Al Jazeera.

Planned Parenthood is one of more than 40 groups that recently joined forces to issue a report (PDF) outlining measures California must take to increase abortion access. The coalition, known as the California Future of Abortion Council, says without these changes, the system will likely be overwhelmed by those travelling from out of state.

“We really want to make sure that there’s equitable access to abortion care,” Matsubara said. “Abortion bans really disproportionately impact people who are already marginalised or have low income, or are from communities of colour.”

The report, which also serves as a blueprint for other states, has prompted 13 bills that are currently pending in the California state legislature.

If passed, they would fund abortions, travel and lodging for people who cannot afford the high costs; train and fund more healthcare workers to perform procedures, and add legal protections so that people are not held liable for their pregnancy outcomes.

Newsom and the state legislature are working quickly to get all the bills passed by August. The Golden State is certainly poised to become the Scarlet State in short order.

California could soon house nearly 30% of the country’s abortion clinics if the Supreme Court overturns Roe v. Wade, according to a new report.

If the 26 states that are set to pass near-total or total bans on abortions close all their abortion clinics, California would jump from having 21% of all clinics in the country to roughly 29%, despite being home to just 12% of the U.S. populaiton, according to the San Francisco Chronicle.

…California has sought to become a sanctuary for women seeking abortions ahead of the expected Supreme Court ruling, building new facilities closer to airports and high-trafficked transit areas.

The move certainly is on-brand for the California Democratic Party, which clearly embraces policies leading to death, crime, and despair.

Maybe there are a few Democrats that haven’t gone totally insane.

Newsom is the female version of Kamala Harris. Perhaps a tad brighter, he also has presidential aspirations.

Was that a Levineian Slip?

Two San Francisco Democrat (although they both prefer to live in Napa) scorpions in a bottle striking each other. Will the pretty boy or the old crone win?

Gavin Newsom is still trying to position himself the d/prog nominee in 2024. Young, telegenic Gov seizing the moment to push Pelosi and the old guard d/prog out of the spotlight. Lots of fissures in the d/prog party structure with more cracks appearing each week. Post midterm wipe out the d/prog will reorganize and realign their political posture.

Their problem is lack of bench depth nationally and that they let the very loud but smaller portion of their party’s extremists run wild in setting a policy agenda very far from the center. The AOC wing won’t go quietly so expect infighting and recriminations as they battle for internal control of the d/prog party.

The odd part of the story, there is a cottage tourist industry for people to fly into California and have their babies in the US so they claim US citizenship for the child.
In one respect they have no issue eliminating kids while at the same time encouraging the birth of others within the boundaries of the state.

I like the “Democratic” Party has gone missing’ part. Wish it was permanent.

The funniest part is they are related.

Newsome is an Aunt Nancy Man!

Pelosi is NOT related to Gavin Newsom in any way. Her brother-in-law (husband’s brother) was married to and divorced from (in 1977!) Newsom’s paternal aunt.

She’s his ex-uncle’s sister-in-law. Even if his aunt and her brother-in-law were still married that wouldn’t make her his aunt, except as a courtesy title. I call people in that relationship to me “uncle” and “auntie” because I don’t know what else to call them, but they’re not really relatives at all — they’re my relatives’ relatives.

CAGE MATCH! PUT HER IN THE CAMEL CLUTCH!

She is no match for
Kamel Toe Kamala

SB1142 will require my tax to pay to promote abortions, pay for food, gas, transportation, lost wages, and the abortion.

Then there’s AB2223 which allows a person to kill a baby after its born as long as its abortion related. Made me sick to my stomach reading the bill.

I’m in on the late-term abortion, if it allows us to also kill Pelosi.

It’s startling how all butch lesbians and very homely (self-inficted green-hair, tattooed types) women – who have as much use for an abortion as a man has for a tampon – are the loudest abortion proponents.

AB2223 which allows a person to kill a baby after its born as long as its abortion related. Made me sick to my stomach reading the bill.

Peition fo a rider in the bill to allow abortions of 82 year olds. Namely, Pelosi.

Are they calling it the “Gosnell Act”?

Immigratiion Reform: The Supreme Court could rule that we have a right to close the border gate once a week. Maybe we could put up a sign, “No Illegal border crossing today as we are closed on Sundays.”

No, the point is the demographic dynamic mitigates certain classes of progress. We observed the same inertia when it came to normalizing trans/homosexual couplet marriages. Illegal immigration is a separable issue from democratic support for the wicked solution (and political congruence).

Guess he’s been uninvited to The Nan’s next family ice cream social.

They haven’t been family of any kind since he was ten years old.

Since this ONLY remands it back to the states how has anyone gone missing?

Back when the Dems had solid control of both houses they could have legislated to ban states from banning abortion. Except they really couldn’t, because there were enough pro-life Democrats that they wouldn’t have had the numbers. Remember, one of the things that held up 0bamacare until the Dems lost their filibuster-proof senate majority was a revolt by pro-life Dems against the pro-abortion portions of the bill.

So Gruesome Hairgel has managed to displease his auntie because he said she wasn’t an evil enough killer.

‘Where is the Democratic Party – where’s the party?’ he pushed. ‘Why aren’t we calling this out? This is a concerted, coordinated effort and, yes, they’re winning. We need to stand up. Where is the counter offensive?’

This fool is aware what state he’s the governor of, isn’t he?
The state where Republicans couldn’t get a foothold on a public sidewalk?

So far, it seems that the most SCOTUS would do about abortion is to leave its regulation to the 50 states. Do states or “We the People” have unlimited authority over life and death? Do they get to overrule God and all religious strictures about abortion?

States certainly get to override God and all religious strictures, since neither the USA nor (according to pretty much everyone except Justice Thomas, who I think is correct) any state, is allowed to adopt a religion. As far as the state is concerned all religions must be exactly equal, and the law must not defer to any of them.

But no, states don’t have unlimited authority over life and death. They can’t deprive anyone of life, liberty, or property without due process of law. So they couldn’t mandate murdering anyone; but they are not required to ban murder. A state could make all murder lawful, and leave it up to potential victims to defend themselves. But it couldn’t ban self defense.