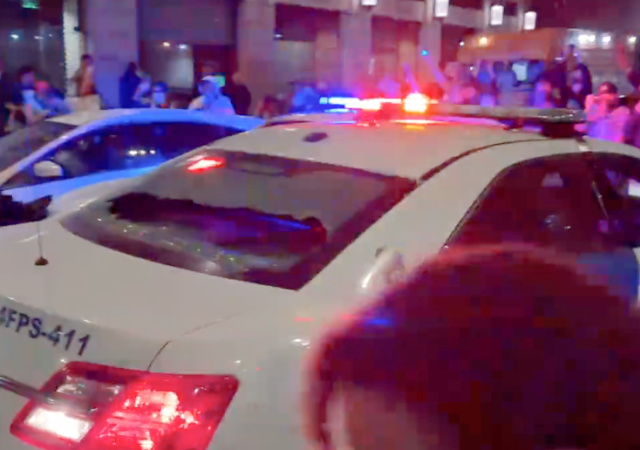 I don’t know people in California are so upset about Roe v. Wade possibly going away. Your government will allow you to have abortions probably up until birth. Who knows when they’ll stop?

Either way, the left is all about rage and anger so people took to the streets to protest the SCOTUS leak.

It turned violent with protesters attacking the cops, including a Federal Protective services car.

Receiving update on protest @ Pershing Square. A segment of the group began to take the intersection. We attempted to communicate, clear and provide dispersal order to the group. Crowd began to throw rocks and bottles at ofcrs . We have one ofcr injured( Unk extent). https://t.co/nYMbwTUsxj

A few protestors are tapping on the hoods of police cars as they attempt to clear the intersection. pic.twitter.com/40uCwwvgsD

Some of the protestors and police have clashed. pic.twitter.com/9YyyQvx6uU

At the far-left pro-abortion direct action in Los Angeles last night, protesters surrounded & threatened law enforcement trying to get them off the road. pic.twitter.com/pyRBzpygEZ

Los Angeles #Antifa smashing in the windows of a DHS car tonight at a pro-abortion riotpic.twitter.com/r49RyCUm3y

LAPD being chased out by mob. One yells "stop with the peace policing" at the person trying to hold back rioters pic.twitter.com/0F7gbfQBko

I don’t see a count of those arrested.

Mathematically, “counting numbers” begin at 1. So if there are zero, there is no count.

They gotta kill someone if they can’t kill their own babies.

There is zero chance of California restricting abortion

But there is a non-zero chance of Congress eventually banning abortion nationwide. It won’t happen soon, but there’s at least a chance that it may happen in as little as ten years, given a sufficiently Republican congress.

For two named parties to The Constitution: “the People”, and “our Posterity”, excluded, selectively, opportunistically, with liberal license and progressive forethought.

A wicked solution to a purportedly hard problem: social, redistributive, clinical, and fair weather causes. NOW, we know the origin of the witch myths where the hags aborted and cannibalized children, and their little dogs, too.

They pick interesting places to act like this, don’t they? California is one of those states that will legalize abortion up to 9 months after birth. So what do they gain by acting like this in LA?

If they try to do this kind of stuff in places run by decent people, they get arrested. So they stick to their shitholes.

LA shops got stuff as nice as anybody else’s, and that’s where they live.

This was a practice exercise used to make sure their phone tree was still current.

Liberal Playbook: When liberals lose in the arena of ideas they resort to polemic ad-hominem attack resulting in violence or the threat of

The left has been training for this for years. C.F. BLM protests and AntiFa thug tactics.

When (not if) people start fighting back, it’s going to get bloody.

It seems like a bunch of LARP (live action role play) to me. Why? The disparity of force and choice of venue. These jacklegs always seem to ensure they thoroughly outnumber any opposition and only seem to venture out in locations whose political masters are sympathetic and who’s LEO and judicial system are hamstring from vigorous enforcement, high bail and stiff sentences.

IOW they follow the path of least resistance. These loons are smart enough not to venture out into the hinterlands of middle America where the population, politicians, LEO and Judges haven’t been neutered and would be delighted to throw their ass in jail. These weirdos are smart enough to avoid that scenario which is why they stick to their own sandbox in Seattle, Portland, LA, SF, NYC and a few others.

The key word to all of that is “planned”

AF/BLM/anarchists/whatever have a strict set of rules they follow regardless of their supposed organization. There are leaders who stay back and are careful not to do anything that might get them arrested while they pass along instructions to the rest, finance to bail out anybody before they talk, media minders to block any possible hostile media and escort friendly ones, enforcers who can and will break bones and spill blood, decoys with umbrellas and signs to distract and block any police response, and so on. Don’t ever engage with them, even if and *particularly* if you are armed, because they will provoke a response and proceed to either beat the heck out of you if they can or sic the police on you if not, and follow it up with harassment in court and at your home.

I think we are saying the same thing in different ways. These loons are better organized today than in the ‘occupy’ days many years ago. They communicate and respond effectively. They have a more or less standardized kit and a playbook that works.All that is true. The weakness though is that they have developed all of that for a specific type of specific type environment; an area in which they are allowed to operate to a large extent.

The passive, hands off approach of Seattle or Portland doesn’t exist everywhere. Their success is dependent upon that passivity and more importantly the ability to operate on their ‘home field’ where not only are there large numbers of like minded people they can blend into but who are active supporters.These antifa loons are more or less confined to their home cities that accommodate and tolerate their antics because of the ideological make up of these cities.

I contend that 500 imported antifa loons attempting to lay siege to a federal building in say Alabama would find a far different operating environment than they are used to. Going further I believe most places without a large pre-existing, active antifa organization are largely immune from antifa threats of widespread disorder precisely because the absence of a strong local antifa org indicates that the culture of that community will not accommodate disorder or be sympathetic to their violent methods.

Without the built in home field advantage of a sympathetic population and the weak public officials they elect antifa is largely toothless. They can’t very well operate using their typical Maoist tactics of an ‘insurgent swimming among the people as fish swims in the sea’ if the ‘sea’; a lookalike, sympathetic population doesn’t exist.

I don’t think it’s reasonable to treat this as a ‘left vs right’ issue.

Views on abortion don’t fit a linear political scale, AntiFa are anti fascist in the same way that antipasta isn’t pasta and although BLM’s roots are marxist ideology the people on the streets are merely racist.

Oh, and when people started fighting back they were arrested and prosecuted, and demonised in the media as ‘white supremacists’ (despite being led by someone hispanic).

Ok diaper, credit where credit is due, the antipasto analogy is funny and accurate.

The rioters were in the streets in DC almost before the news hit. No doubt this was all pre-planned before they released the draft.

these are NOT ‘far left protesters’. They are Democrat operatives taking opportunity here. In this war, words matter as much as anything.

For people who advocate killing unborn babies, injuring a few cops is of no consequence. Besides the criminal friendly DAs on the Left coast envy this type of behavior..

To the left, protest isn’t a means to an end, it’s an end itself. Their protests turn violent because the protesters aren’t there to make changes but to engage in the act itself, and have no concerns about how the violence looks or what it does to their cause.

Basically, they riot because it’s fun. The protest is the excuse.

These individuals are violent rioters not mostly peaceful protesters

That’s ok because Biden told us the M.A.G.A. crowd and those that vote for what they want are the terrorists. Since no one really voted for Biden, I supposed that’s how me made that leap. #fjb #LetsGoBrandon