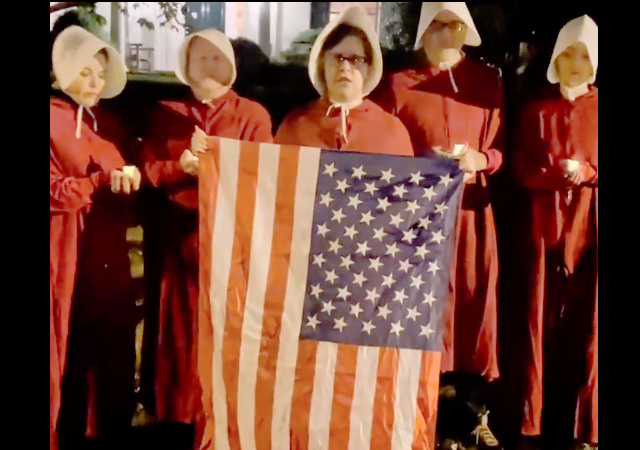 Ruth Bader Ginsburg spent her entire life moving the needle towards justice for all. She believed, and we believe that:

Our 6-3 extremist Supreme Court routinely issues rulings that hurt women, racial minorities, LGBTQ+ and immigrant rights. We must rise up to force accountability using a diversity of tactics.

It’s supposed to take place on May 11. Police have been protecting the justices’ homes since someone leaked Alito’s draft opinion overturning Roe v. Wade.

I didn’t realize it’s so extreme not wanting to murder unborn human beings. I wonder if they’re also against the death penalty…just like the Catholic Church.

Whether you’re a “Catholic for Choice”, ex-Catholic, of other or no faith, recognize that six extremist Catholics set out to overturn Roe. Stand at or in a local Catholic Church Sun May 8. #WarOnWomen #MothersDayStrike pic.twitter.com/v2vtpd12Gp

RBG also believe there were fundamental differences between men and women, but her fans still supported a justice who claims not to know what a woman is.

I just know the Black Marias are getting spiffed up and ready to roll. Don’t you?

I think the entire leak was intended to rally leftists to the recession proof divisive stronghold of abortion. Blue state governors have all held virtue signaling rallies in lock step.

Everyone is sick of the tantrums. Everyone is facing really economic issues that impact their own 4 walls. This will not go well for the left.

Planned from the highest level of government and intended to rally leftists—get their minds off all the problems Biden has caused and force them think about something else.

It seems to be working.

I grant you this was well planned in advance but this is an ideological issue ( which doesn’t diminish the importance of it) and right now people are feeling and reacting to multiple issues that are hurting them directly which has their attention.

10 years ago, this would carry a lot of political horse power but right now, it is greatly overshadowed by other things. (people are going to see the left “jumping” all over this while “NOT” fixing anything else so this most likely can quickly become an albatross)

The hand maiden outfits are nice touch but shouldn’t they more invested in their role playing? Where’s their male escort and what’s with their vocal protest? Aren’t ‘hand maidens’ supposed to be demure and conditioned to accept subordination? What sort of limp wristed ‘patriarchy’ would pause their oppression and subjugation of ‘mere females’ to allow them out of the house on their own much less to deviate from the patriarchal approved orthodoxy?

Maybe it’s because there is no patriarchy nor is anyone oppressing women, but fantasy is what fuels these crackpots and if they allowed facts to intervene they’d have to admit the truth; feminism has won, women have long since achieved equality and are, as a group, dominate over men, as a group. This bears out in college admission +graduation rates, our family court system, the employment rate and the deference the residual western traditions grant to women.

Silver lining: by ordering in bulk, they got a nice discount.

….and maybe were produced by a small business

Yeah, I didn’t think of that.

You know, those costumes look so much more professional now than the white ones they used to use.

But isn’t the headgear supposed to come down over the face, with eyeholes?

Those costumed individuals all look like “non-birthing persons” to me.

I wonder if they’re also against the death penalty…just like the Catholic Church.

I’m sure they are. Leftists in Western countries almost always are. They simply ignore the inconvenient fact that their communist heroes all execute people right and left.

The rule of thumb is—the same people who want to allow killing innocent babies are the same ones who demand mercy for convicted killlers.

Unless your beliefs are to the right of theirs. Then they think you should be turned out into the desert and left to die.

Since these illiterates never read the memo. There isn’t much you can do to explain it to them.

When the most important thing in your life is abortion, all the other problems in America seem like small potatoes in comparison.

I was under the impression that you must to be pregnant in order to qualify for an abortion.

These ladies are out to win friends and influence people?

A draft document of the Pope’s has been leaked. There will be a new sacrament of abortion. To mollify traditionalists the rites will be read in Latin. At the moment of abortion, fetal fluid will be collected in a sanctified golden chalice and the purest white fetal tissue will be collected on a silver salver. After the priest recites the sacred words and partakes of the body and blood of the fetus, he will serve communion to the formally birthing person, the holy abortionist, other acolytes and the robed trans boys -ringers of the holy bells.

It is an immutable article of faith that the fetal fluids and tissue transubstantiate into the body and blood of George Floyd.

I heard that was a hail Mary to Joe Biden as he attempts to throw the atomic football to Kamala across the rug in the Oval Office.

Marching and protesting… an excellent way to avoid the need for an abortion.

So these are the new rules for protesting?Take it to their homes. Good to know.

‘Life in prison for all abortionists on demand, and without apology’ and all these demons hissing and screaching because they cannot sacrifice babies into the blood volcano goes away.

Is there a storehouse where they keep those stupid outfits at the ready?

Release the ruling now – to minimize the risk to the Justices and their families.

Was just watching a podcast with John Yoo recorded in the immediate aftermath of the leak. He was very clear that he worried about the safety of the Justices – those who are assumed to form the majority along with Alito. It sounds crazy, but this is where we are now.

I have been thinking about the Jane Mayer pieces in the New Yorker attacking Ginny Thomas – what was the timing of those pieces relative to the draft date of the Alito opinion?

Yep, that’s exactly what I am sayin’.

Ironic that harpies exercised over the potential loss of a “right” found in the “penumbras and emanations” of the right to privacy, dox Justices and show up at their homes.

Here is a petition to publish the decision ASAP: https://lifepetitions.com/petition/scotus-publish-decision-to-overturn-roe-now

I’m not a biologist, but some of those “handmaidens” look like men.

That’s OK, you can just identify as one.

If they would promise to show up in front of my home, I’d make certain that a good number of dogs leave their business in the walking area…