Lake Mead Gives Up its Dead, as Waters Recede from Drought

Lake Mead Gives Up its Dead, as Waters Recede from Drought 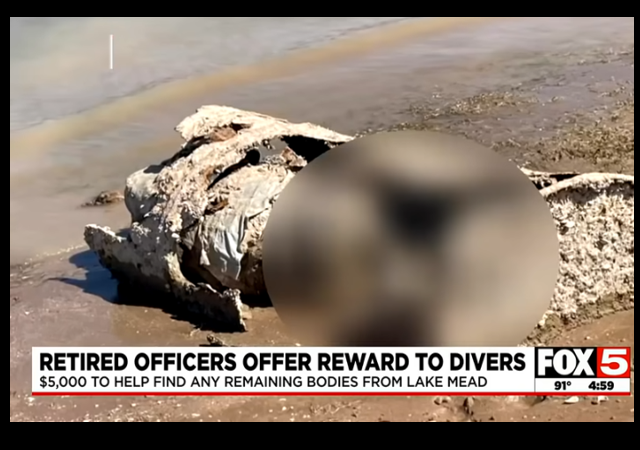 As the water levels of Lake Mead (the nation’s largest man-made reservoir) recede due to drought, human bodies continued to emerge. A second set of human remains have just been discovered, days after another body was found in a newly exposed barrel.

….It is not known if the remains were uncovered because of the receding waters.

But police warned that more bodies could turn up after a man’s remains were found in a metal barrel last week that was exposed amid an ongoing drought.

The water level of Lake Mead has dropped so much that a water intake valve which supplies Las Vegas has become visible for the first time since 1971.

Park rangers responded to the scene on Saturday and recovered the human remains, the National Park Service said in a statement. The Clark County Medical Examiner will determine the cause of death. The investigation is ongoing, officials said. No further details were provided.

The Clark County Medical Examiner has collected the remains and is working to identify the person and determine a cause of death.

The discovery came a week after the decayed body of a man was found stuffed in a steel barrel near the reservoir’s Hemenway Fishing Pier, more than 20 miles from Callville, according to the Las Vegas Metropolitan Police Department.

“We believe this is a homicide as a result of a gunshot wound,” Lt. Ray Spencer, head of the LVMPD’s homicide section, said of the body found on May 1.

Spencer said the Clark County Medical Examiner is attempting to identify the body. He said detectives believe the man was killed in the mid-1970s to early 1980s based on his clothing and footwear.

In regards to the second body found on Saturday, LVMPD officials said Monday they have found no evidence to suggest foul play.

Right now, there "is no evidence to suggest foul play" in the death of a person whose skeletal remains were found at Lake Mead on Saturday, police said. https://t.co/lqcvulwZ0m

The reservoir on the Colorado River is about a 30-minute drive from the mob-founded Las Vegas Strip.

Goodman was a defense attorney who represented Mafia figures including ill-fated Anthony “Tony the Ant” Spilotro before serving three terms as a martini-toting mayor who made public appearances with a showgirl on each arm.

He declined to speculate about who might turn up in the vast reservoir formed by Hoover Dam between Nevada and Arizona.

“I´m relatively sure it was not Jimmy Hoffa,” he laughed, referring to the former labor boss who disappeared in 1975. But he added that a lot of his former clients seemed interested in “climate control” – mob speak for keeping the lake level up and bodies down in their watery graves.

It’s a good thing DNA analysis has come a long way in recent years! Clearly, what happens in Vegas is no longer going to stay on the bottom of Lake Mead.

Boaters on the widely popular Lake Mead in Nevada — home of the renowned Hoover Dam — discovered human remains in a barrel that had apparently been submerged for decades. Now two retired Las Vegas police officers are offering a reward for divers who find additional bodies in the recreational lake.

David Kohlmeier and Daniel Minor host “The Problem Solver Show” on local cable. The two retired lawmen said they would offer $5,000 for any additional remains that are found, FOX 8 reported.

“The Problem Solver is offering this challenge in an effort to bring a sense of closure to the families and friends of the victims, and to assist local law enforcement in their efforts,” the men said in a statement Thursday.

Wonder if this will lead to the “cobra effect”? 🙂

I just learned something!

Or divers calling mobsters and demanding a better price for not diving.

Considering the origins and history of Vegas, it’s a greater surprise that more bodies aren’t popping up.

Hey, good one. I got those references right away. Though it does requires a little cultural background.

From the movie, Deliverance.

So I shouldn’t get my 4 acre pond dredged?

Reminds me of a story of a guy that “broke up” with his girlfriend/wife on a boat and tossed her weighted body overboard.

Too bad he did it where divers routinely went scallop fishing.

Note to potential criminals: go far out and deep when disposing of bodies.

Hell, we may even find Obama’s birth certificate and college transcripts in another one.

I live in Nevada near Lake Mead and volunteer as a small boat operator doing safety patrols for the NPS. It’s unbelievable how much the lake level has gone down in recent years. There’s even talk of shutting down many boat launch ramps very soon. Before that happens, I guess my “day late, dollar short safety” patrols could get pretty interesting!

Have they found Fredo’s body yet?

He was smart, not like everyone said, and he deserved respect….

Nah, that was Tahoe.